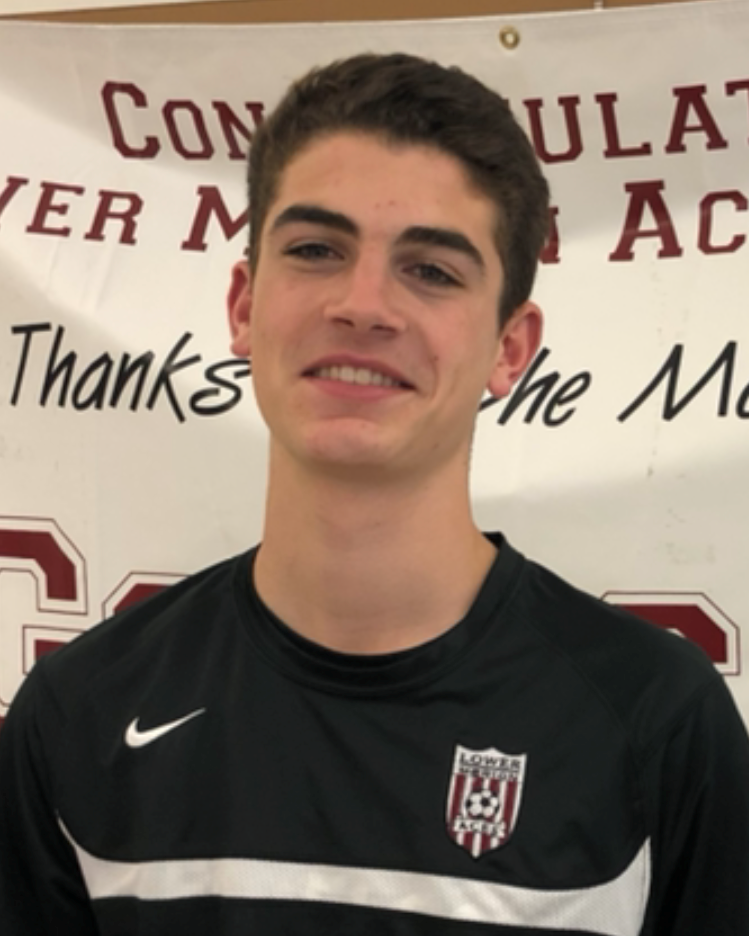 The junior center back, a first team All-Central League boys’ soccer selection, was a rock-solid performer for the Aces this fall, according to Lower Merion head coach Nico Severini. Pitonyak and the Aces finished third in the District 1 4A tournament and advanced to the PIAA 4A state tournament quarterfinals. Severini said, “Will had a great playoff run, helping the defense maintain a few shutouts and be also being a threat offensively. He has worked hard, and has a very positive attitude.” Off the pitch, Pitonyak participates in the Investment Club and Meditation Club at Lower Merion.

A: My favorite game this season was our first game of states against Emmaus. I’ll never forget playing in a huge stadium under the lights in such an important game representing my school. The most vivid memory has to be sprinting down the field to celebrate and the feeling inside after Lincoln Blouin scored with just over a minute left to clinch the win.

Q: How do you view your on-field leadership role as a center back?

A: I think playing center back comes with a great deal of responsibility because its the last two players before the goalie and a part of that is helping lead the team, whether it be communicating to keep everyone organized, getting players back into it after letting up a goal or just helping to fix problems mid-game.

Q: What do you consider the strongest part of your game, and what are you working on most currently?

A: I think my best attribute has been reading the game defensively and winning balls in the air, while I am working on making faster decisions on the ball.

Q: Tell us a little about your start in soccer. Have you always been a center back? Who have been your most important soccer mentors, and what was the most important thing each of them taught you?

A: I started playing when I was 3 or 4 and have played ever since. When I was younger I played midfield as well as defense but center back has always been most natural to me. Some of the coaches who have taught me the most have been Biff Sturla, Matt Cox, Jeremiah White and of course Nico Severini. Biff and Matt taught me a lot about the fundamentals and helped me learn a more advanced style of soccer and possession at a young age.  Jeremiah has taught me more about the game and  expanded my soccer IQ while Nico helped me transition to high school soccer but more importantly taught me about a “team together” attitude and character on and off the field.

A: On game day I make sure I am staying hydrated all day in school and get a good lunch. When I get dismissed I like to get taped up before heading out to the field and locker room, where I set up my uniform in my locker. During warm ups I listen to music because it helps me get mentally focused for the game and task ahead.

Q: You wear uniform jersey No. 4 for Lower Merion soccer. Is there a reason you picked this number – does it have any significance to you?

A: I wear No. 4 for a few reasons. When I was in elementary school I played ice hockey with my older brother who was No. 4 because of my dad. I couldn’t be 4 like him so I chose 44 because it was the closest thing to it. When we stopped playing together I took No. 4 and have stuck with it since. I also wear No. 4 because one of my favorite players and someone I like to model my game after, Virgil van Dijk, also wears No. 4.

Q: What is your favorite course at Lower Merion? What do you think you might want to major in at college?

A: My favorite classes this year have been Sports and Society, English and U.S. History. I also take a dual enrollment business program where I learn a lot and think I may want to continue into the field in college.

Favorite book: The Blind Side.

Person I most admire: “Tom Brady because of his dedication, passion and mental and physical toughness.”

McCaffery: Even in defeat, prestige is back for Strath Haven soccer
All-Pioneer Athletic Conference Academic and Citizen Awards