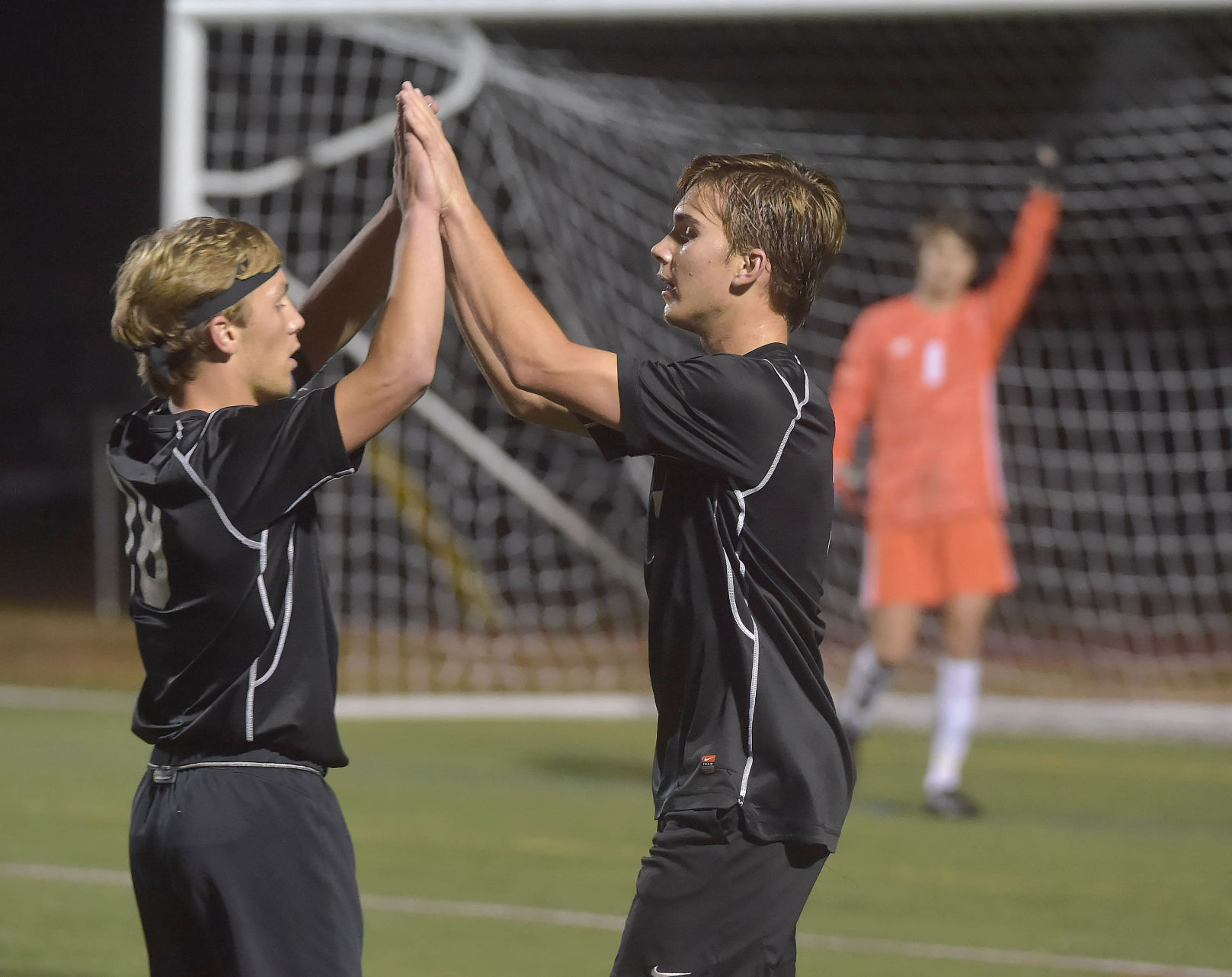 Among the believers that have helped Strath Haven to a second consecutive run through the PIAA boys soccer tournament are Simon Bolinger, left, and Peter Boerth. (Pete Bannan/MediaNews Group)

One year ago, Strath Haven went from being in the top half of the Central League to the PIAA Class 3A boys soccer final in its first year in the state’s second-largest classification.

More than half of the starters from that team, including 2018 Daily Times Boys Soccer Player of the Year Nate Perrins, have since graduated. Yet the Panthers are right back in the state final for a second straight year, which according to center back Luigi Malo shouldn’t be a surprise.

Where last year’s run to the state final transpired against a passive sense of disbelief that the Panthers could get that far, this year’s headwind was an active doubt from the outside. With so many new faces, how could Haven possibly repeat?

Weathering the external pessimism enriches what the Panthers have felt on the way to Saturday’s final, where they look to rectify last year’s season-ending disappointment against District 3 champion Lower Dauphin (6:30 p.m., HersheyPark Stadium).

Last season ceased a game early, with West Allegheny jumping all over the Panthers in a 4-0 win. It’s perhaps kismet that Lower Dauphin (21-3-1) knocked off West Allegheny in the quarterfinals this year.

The Falcons are no stranger to Hershey, in the finals for the third time in four years. Lower Dauphin won the 2016 and 2017 3A boys titles, both lopsided decisions over Northwestern Lehigh.

So much has changed from last year for Strath Haven (16-7-1). The personnel is an obvious change: Perrins, midfielders Nicky Palmero and Gavin Birch and center backs Vincey Palermo and Ben Wainfan were all key components on last year’s run as seniors.

Perhaps more glaring is the change in mentality without Perrins. Last fall, he scored 14 goals in seven playoff contests. This season, the Panthers have 12 goals in six postseason games, scored by nine different players (plus an own goal).

“Compared to last year, this year I feel like everyone has their role and everyone plays an important role, in the offense especially,” said midfielder Andrew Lowman, who set up both goals in Tuesday’s 2-0 win over Archbishop Wood. “We need everyone to step up and pick up where we were last year, and everyone’s fulfilled it. We trust everyone to do their jobs.”

The 2018 journey provided a blueprint for the current group, many of whom were on the bench or were varying levels of contributors last season. That run established the standard, for certain, but it also set out mileposts along the season for this team to reach. It’s paid off, with Haven playing its best soccer at the most crucial time.

“We talked a lot about our goals in the beginning of the year, and this was clearly at the top of the list,” coach Ryan O’Neill said. “A lot of guys learned a lot going through that process this year. We knew what to expect, we knew how to handle it, we knew how to grow through the season and every single game wasn’t necessarily about the win of the game but it was about figuring out who we were and how we want to play and the growth and the discipline was the most important thing.”

So much of what the Panthers do in all phases owes to the relationship between players and their understanding on the field. While there’s no star of the caliber of Perrins, the Panthers are able to rotate around 14 quality players with little drop off in quality. Add in the minute details that they are so good at – the myriad small details in the way defenders work off each other to cover attacks or the chemistry between Lowman, Emmet Young and Jake Hooper in a midfielder triumvirate, all bolstered by exquisite set-piece execution – and you have the recipe for a championship squad.

This year’s repeat run cements the current Panthers’ legacies. For a program with five state championships (including a co-championship in 2001), this is the eighth finals appearance. Success at Strath Haven is measured not in one-off victories but in sustained excellence.

If there was any misapprehension that last year’s run was an outlier, then this year’s repeat dispels it. And it furthers the history of program, a heritage in which O’Neill, a two-time All-Delco and Player of the Year in 1995 for Haven, was reared.

“I’ve come full circle in being a coach here,” he said. “My kids and my club players are the ball boys and girls on the sidelines. I grew up being a ball boy. I grew up watching state runs and wanting to be there. I grew up wanting to be a player on a team and having success as a player. And now getting to come back and have that success, making these runs, it really does mean the world to me and most importantly, it means that these kids get to experience what I did and the enjoyments I got out of it.

“So for me, winning is wonderful, and that experience comes with some of that winning. But to have them enjoy it and to be bonded because of it, I couldn’t ask for anything more.”

For all the joy on the journey, there’s no doubt that one more win would make it that much more rewarding.

“We need revenge,” Lowman said. “We’ve got to get revenge and get a win.”

North Penn leans on depth to bring home first PIAA title
McCaffery: Even in defeat, prestige is back for Strath Haven soccer