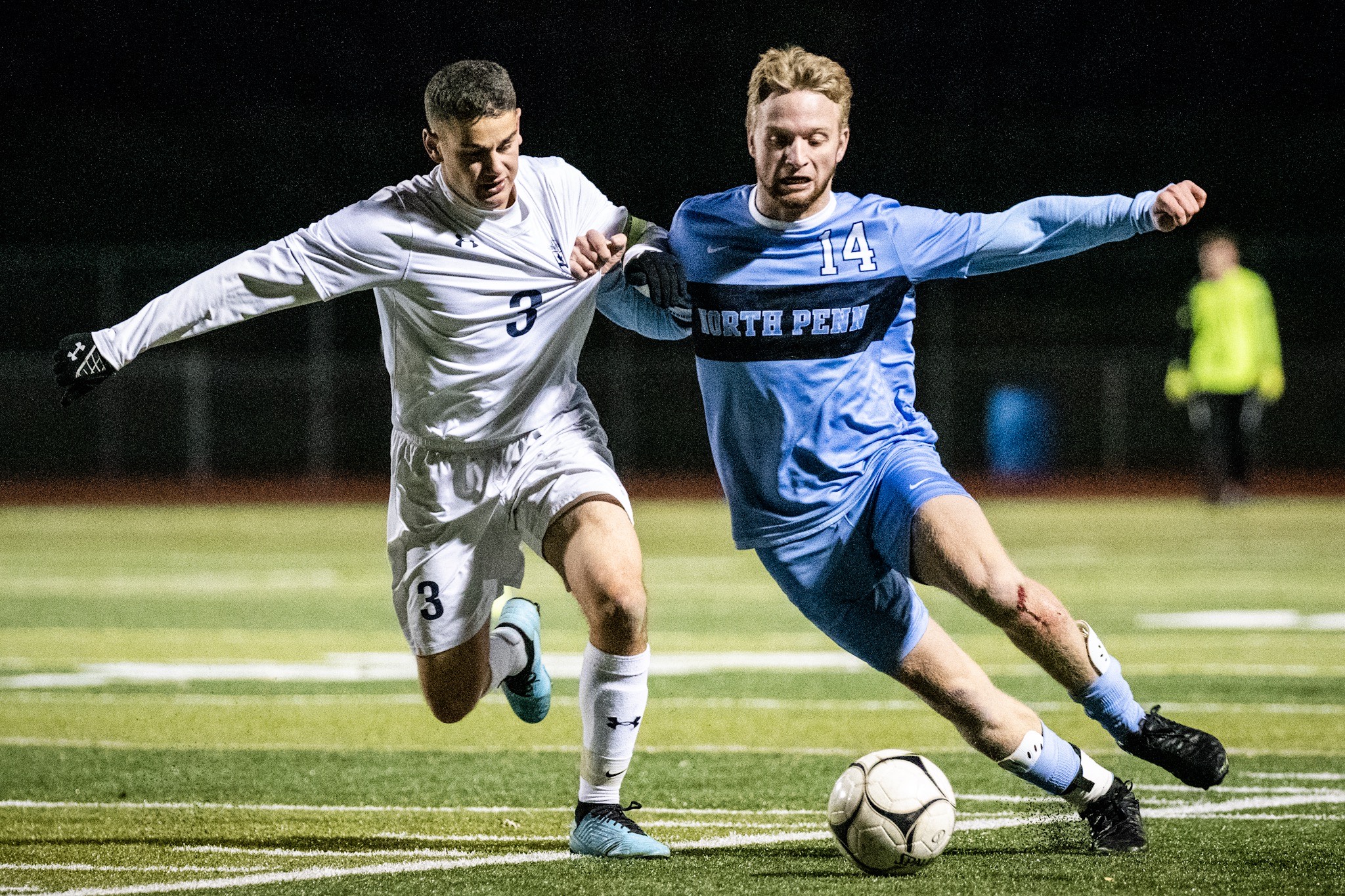 The last two Class 4A boys soccer teams left playing in the state of Pennsylvania couldn’t have taken more different paths to Hershey.

On one side, North Penn has spent the season looking every bit the state title favorite it came in as, sitting atop the District 1 power rankings most of the regular season, rampaging through the district bracket as the top seed to the program’s first title and has fended three familiar foes in states. On the other, the Bucks endured an early swoon, clawed into districts as the No. 23 seed and have spent about five weeks playing do-or-die games, all on the road.

Yet, both find themselves on the cusp of a state championship, to be determined at 6:30 Friday in HersheyPark Stadium as a fitting cap on what’s been a three-year series of battles between the programs.

After two years of heartbreak losing a high seed in the district tournament, the Knights put all their efforts into winning the state title this year. With 14 seniors on the roster, this was their last chance to do it and to prove they were capable of it.

Sometimes, that singular focus can put unwanted pressure on a team and break it well short of the intended goal. Knights junior Josh Jones said an early season loss to Central Bucks East helped with that, taking away the pressure of trying to go undefeated and giving North Penn a needed rallying point in the opening weeks of September.

To senior Carter Houlihan, the team’s talismanic leading scorer, there was also a unity within this year’s team that he believes is the true secret to the Knights’ success.

“In years before, we’ve had great teams but the chemistry just wasn’t as good as it is now,” Houlihan said. “Last year we had a great team but there were a few pockets that weren’t as close with each other but this year, this team is like a family. I think it shows on the field as well.”

CB West’s seniors also saw this as a redemption year of sorts. After reaching the state semis as sophomores, they came back and helped the program win the District 1 title last year as part of a team that voiced the same goal as this year’s North Penn side to win the state title.

That run never materialized as the Bucks lost their state opener last year but the 17 returning seniors felt they had the ability to make another run. Out of the gate, things just didn’t come together and between injuries, players finding their place and inconsistency, West never really got on a roll.

Late in the season, the team found its identity and even as a low seed, went into the playoffs confident in what it had.

“We felt like we should have been here last year, so to be in this spot this year, it just means our hard work has paid off,” West senior Jimi Leder said. “We believed in each other, stuck to the plan, executed and just found a way.”

“I learned that this group of guys is never going to give up,” Bucks senior keeper Ryan Van Pelt said. “We never think we can’t do anything, we know ourselves better than anybody, we know what we can do best and we go into our games and play them our way.”

During districts, North Penn scored 12 goals and gave up four before hoisting its first district title. That championship allowed them to stay closer to home and run through what turned into a gauntlet of rematches from earlier in the season.

While those foes – Wilson, Conestoga and La Salle – knew what the Knights had, the Knights also knew what they had and Jones didn’t think it was a disadvantage to have to try and get past familiar teams again.

“I think it was good for us,” Jones said. “A team can see us and have played us, but it doesn’t matter, we’re still going to come at them.”

The Bucks got plenty familiar with bus trips, playing five straight road games in the district tournament including two in the playback bracket just to secure their spot in states. They followed with three neutral state games as a lower seed that took them to Hershey and Mechanicsburg before a relatively close trip to Harriton.

“The goal at the beginning of the year is to make districts, we did that as the 23rd seed and everything was away,” senior Bailey Moyer said. “But with that, it means we’re together all the time, we bonded the past couple weeks on these road trips. We’ve been all across the state, we’ve gone everywhere and all that time spent together makes us stronger as a team.”

Unlike North Penn, which has thrived as a marauding side always on the attack, the Bucks found their identity as a grind-it-out team that won with mental and physical toughness. CB West has won two shootouts this postseason, first in the consolation final and again Tuesday in the state semifinals and the players have fully embraced their identity.

“It’s how we’re built,” Moyer said. “Our thing is get the ball, get it forward and keep working and keep grinding. If you’re tired, we go deep into our bench. It’s big on being a ‘West kid,’ it’s our motto and it’s who we are.”

North Penn won both meetings during the regular season, a 5-2 result and a 3-1 win that West held a 1-0 lead in late until a quick flurry of Knights goals. Van Pelt said that second game was there for West to take and not finishing it has bugged the team ever since.

Last fall, after splitting the regular season series, West edged North Penn in spot kicks during the district quarterfinals and the sides split their two meetings the year before so it’s been an extremely closely contested three-year run. There are no surprises this point and connections run deep between the teams.

Ryan Stewart and twin brother Jamie play on West coach Stefan Szygiel’s PA Rush club team, Houlihan and Moyer are club teammates and plenty of others on the two rosters have grown up playing with or against each other. It’s an interesting dynamic, one Stewart said can be tough to put aside for 80-plus minutes once the first whistle blows.

“It’s certainly difficult, we have a club tournament in two weeks where we’re going to be playing for him,” Stewart said. “We’ve grown close through the club seasons so having him as an opponent and knowing how good of a coach he is, it’s still weird.”

On the field Friday night, a critical factor in the outcome will be the aerial game. The 6-foot-4 Jones is one of the best players in the state at winning the ball out of the air, but Moyer isn’t far behind and the Bucks in general are good when the ball is lifted off the field.

West knows Jones will probably win his share of headers but the difference comes in who gets to the ball first after he does.

“They’re just going to have to be in the right spots to win second balls,” Jones said. “I’m going to do my best to win as many of the first ones as I can, but getting that second one is going to be key.”

“Whoever is going to work the hardest is going to be the winner,” Leder said. “It can go either way. It’s two heavyweights just going at each other.”

Houlihan acknowledged how well West has been playing defensively this postseason and feels an early goal for his team would be a major turning point if the Knights can get one.

Both teams are confident in their depth, with Leder giving a very happy Kush Maltesh a shoutout while noting the way the reserves have helped West play its grind-out style. Jones noted that North Penn’s bench has gotten stronger as the season has played out and the starters trust everyone who gets sent on.

Two different paths have led to the same destination as a familiar cast meets one last time with the ultimate prize at stake. It may not be the final matchup many saw coming five weeks ago, but it’s a perfectly fitting end for the senior groups at North Penn and CB West.

“We love every opportunity we have against them,” Van Pelt said. “We know this time, we have to work harder than we did before. We were up with 10 minutes and we have to finish that game out, find a way to grind out the result.”