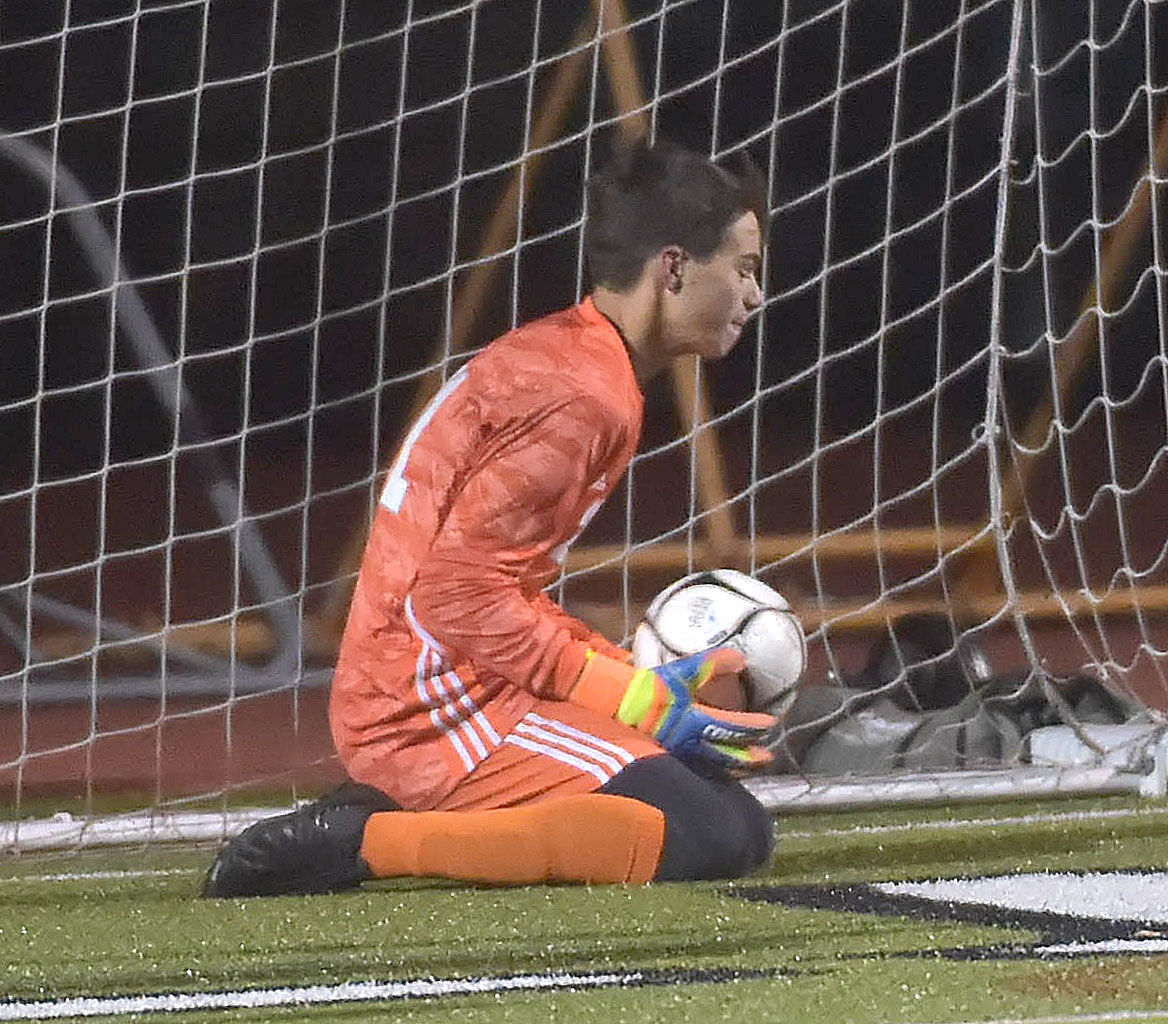 Strath Haven sophomore goalkeeper Charlie Shankweiler has been a solid and steady presence in the Panthers' net during their postseason run to a district title and the upcoming state title game. (Pete Bannan/MediaNews Group)

WORCESTER TWP. — By design, Charlie Shankweiler isn’t supposed to have much to do in Strath Haven’s goal.

It’s just the way Strath Haven tends to play. And in a high school realm where goalie stats are at best illusory and at worse fraudulent, Shankweiler’s saves tallies in the low single-digits can appear underwhelming.

But there are other numbers that supersede them, like the three total goals Strath Haven has allowed in six postseason games, the two straight shutouts in the PIAA Class 3A tournament or the steely nerve to produce two overtime wins. That indicates that while Shankweiler hasn’t had to stand on his head, he’s been as reliable as anyone during the Panthers’ run to a second straight PIAA final.

Strath Haven’s Charlie Shankweiler makes a save in the first period in a state tourney game against Susquehannock. (Pete Bannan/MediaNews Group)

“He stays focused all game,” midfielder Andrew Lowman said Tuesday, after the Panthers eliminated Archbishop Wood 2-0 in a state semifinal game. “When the defense is playing well like it usually does, he doesn’t get many shots. The ones that come on breakaways, he’s focused and ready to make a big save.”

The save totals have been modest for Shankweiler. He ended up with two Tuesday night. The most difficult was, paradoxically, the easiest of its sequence, with defender J.T. Holstein clearing a header from Wood’s Shane Collier off the line before Shankweiler grabbed an ambitions bicycle-kick attempt by Giuseppe Propato to end the threat. It was a typical Shankweiler save, elementary but authoritatively handled.

When he was called into action, it was mainly to corral attempts that were heading wide of the cage or to rush out and cover speculative through balls on the ground. It’s the end product of a risk/benefit analysis performed by Strath Haven’s sturdy defense: If the ball manages to get to Shankweiler, it’s usually because it’s one he can handle.

Sometimes, that falls apart, and Shankweiler has to step up to bail out the Panthers. One such passage was in Saturday’s quarterfinal against Selinsgrove, when the District 4 champion Seals bounded forward en masse in the final five minutes of the half, trying to answer Tim Wright’s opening goal. Shankweiler made three saves in the final 10 minutes of the half, on the way to five for the game, including a grab of a Jamison Bohner free kick knuckling in the wing at Cedar Crest High School and an assertive charge off his line to snuff an attempt by Kyle Ruhl in the waning seconds.

The Panthers entered the break clutching to a 1-0 lead. Within seven minutes in the second, they led 3-0.

“We can always rely on him,” center back Harris Hardy said. “Whether he makes one save or five saves, he always makes the saves.”

Shankweiler’s role is overshadowed by an assertive backline. That foursome includes three seniors — Hardy and Luigi Malo in the center, J.T. Holstein out wide opposite the lone underclassmen, junior captain Simon Bolinger. Regardless of class, it’s a unit comprised of four leaders.

Since an early-season switch that moved Peter Boerth up top from the No. 6 role to provide goal-scoring punch and slid sophomore Jake Hooper from outside back to holding mid, that quartet has been together constantly. They’ve grown more cohesive in numerous intangible ways, from the way they cover for each other to the interplay between the center backs to the adept reads the outside backs make to pinch in and cut off switches of the field. There are so many minute cues that the back line reads and reacts to, and the sum total is the defensive dominance they’ve shown in the postseason.

Shankweiler has a role in that, taking care of the rare instances in which that defensive firewall fails. His concessions have been few and far between: An early goal by Bishop Shanahan in the District 1 semifinal, an early goal in the states opener to Susquehannock and the last-second counter-attacking goal by Holy Ghost Prep in the District 1 final, a game that had been stretched out of order.

But overall, the Panthers have outscored opponents 12-3 in the playoffs. And Shankweiler owns a big slice of the credit.

“I love having Charlie behind me,” Malo said. “He’s smart, he’s a very solid goalie and he’s not afraid to get the ball when he has to.”