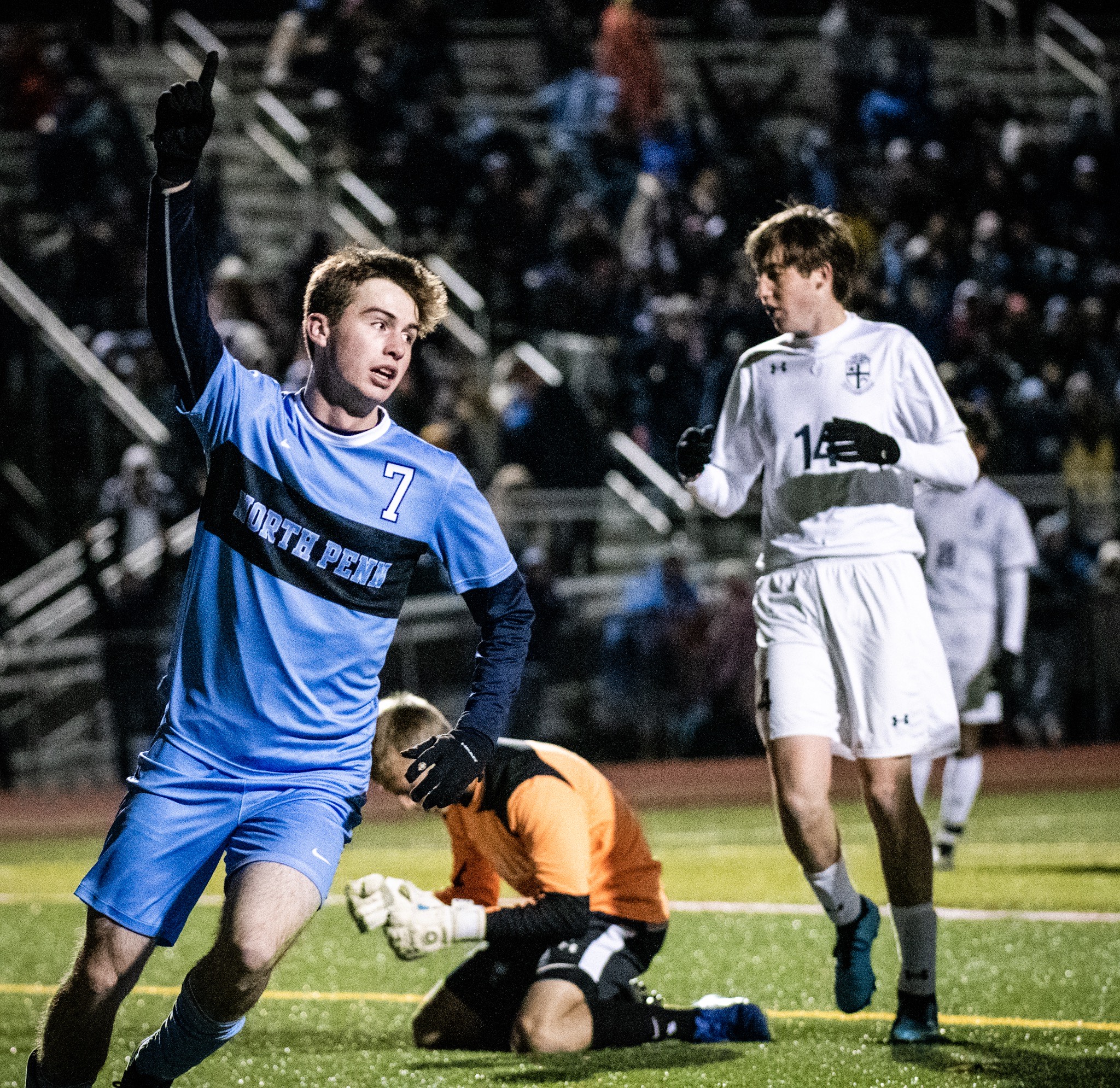 WARRINGTON >> At this point, Paul Duddy is not messing with success.

“We don’t change a whole lot,” the North Penn boys soccer coach said. “When you look at our record, you say, ‘How much are you going to change?’ I mean, I’m certainly not smart but if we over-think it, change too many things I think I’d be crazy to do that.”

On a bitterly cold Tuesday night against La Salle, the Knights did what they have done for almost this entire season to go somewhere the program has never gone before — the state championship game.

Jamie Stewart gave North Penn the lead late in the first half, Mike Chaffee doubled the advantage nine minutes after the break and when the Explorers could not convert on a penalty kick the Knights pulled away to claim a 4-0 victory in their PIAA Class 4A semifinal at Central Bucks South.

“It’s surreal for all of us,” Stewart said. “We wanted to be here throughout the entire season and just actually getting there, grinding out result after results it just means so much to the whole team.”

Besting the Explorers for the second time this year sends the District 1 champ Knights (24-1-0) into Friday’s 6:30 p.m. 4A title match against SOL Continental Conference rival Central Bucks West at Hersheypark Stadium in Hershey. West topped Boyertown in their semifinal at Harriton 3-1 on penalties after the teams played to a 1-1 draw.

“As good as we’ve been year in and year out, we’ve never gotten this far,” Duddy said. “And now this group of players has put us there. So it’s exciting.”

La Salle, out to avenge a 2-0 loss to North Penn Sept. 21 and reach its first-ever state final, had a couple quality chances in an even first half before Stewart finally struck for the Knights off a corner at 7:18. Chaffee made it 2-0 at 31:22 in the second half by pouncing on a rebound.

The Explorers, however, had the opportunity to get back into the game when they received a penalty kick after a handball in the box with 14:46 remaining. La Salle appealed for a straight red card but only a yellow was shown, keeping the number of Knights on the field at 11. Brandon Curran, who had scored five goals in La Salle’s first two state games, took the PK but his try connected with the crossbar and the chance was whistled over when the junior was the first to touch the rebound.

“When you play good teams and North Penn’s a very good team, you got to take care of your chances,” La Salle coach Tom McCaffery said. “And we had three crystal-clear chances in the first half that we did not take of and the PK, so there’s four definite chances there that we didn’t finish that made the game different.

“And at that stage, the referee explained (the handball) from their angle it wasn’t an intentional situation which makes sense, so you roll with it. That’s what it is. I’m glad for the explanation that they gave and it made sense with what they saw, so it is what it is and you move on.”

North Penn found its third tally with 8:45 left on an own goal as a miscue in the Explorers’ back saw the ball roll into the net. Sean Flatley added a fourth goal by knocking in a rebound at 2:41.

North Penn has now won 21 straight since its lone loss of the season — a 1-0 overtime defeat against Central Bucks East at home Sept. 10 — a run that includes a pair of victories over Friday’s opponent CB West, which is also making its first-ever PIAA final appearance.

La Salle entered Tuesday having won its last 14 after back-to-back losses in September to Lansdale Catholic and North Penn. The District 12 champs end their season 22-3-0.

“It’s a great accomplishment to get here especially since we only had that many upperclassmen,” La Salle senior defender Vito Leone said. “It’s always better to get here than not get here at all. So, it’s bittersweet I guess.”

While the Explorers came up a victory short of the final, this year’s team won the Philadelphia Catholic League title for the third time in the past four seasons and reached the PIAA semifinals for the first time since 2012.

“I just said to the guys, there’s only one team who’s happy at the end of this tournament,” McCaffery said. “ I think what it’s going to take is a couple days to decompress and then when we look at what we did this year as a team that was a younger team in the league and in the district that as far as we came here into the state semifinals and lost to who is probably the odds-on favorite I think at the beginning of the year to run the table with this thing.

“The amount of fight we put up and what we did this year is something these guys, when you look at the senior leadership and the captains we have, it hangs on them. And the amount that these young men learned and gained throughout the course of the season was tremendous and I can’t ask for anything else really or thank them for anything else besides the work they put into to get to this point. Hopefully it’s something we can build on.”

La Salle produced the match’s best early scoring chances, including a ball after a free kick into the box that dropped to Ben Herron in front of goal but Herron’s volley ended up bouncing right to NP goalie Sawyer Meade.

Stewart, who was battling a cold Tuesday, finally broke the scoreless tie at 7:18 on a corner kick, getting a head to the ball at the near left post.

“I was just running at the near post like I usually do,” he said. “Ball dipped in and I just lowered myself and I got my head on it. Put it in.”

Chaffee, who missed the district playoffs due to mono, struck to put the Knights up two at 31:22. Josh Jones slid a pass through a crowd of defenders across to Carter Houlihan, who ripped a shot La Salle Jack Heineman blocked but the rebound went right into the path of Chaffee, who sent the ball into the right corner.

“It seems like I haven’t missed a beat,” Chaffee said. “I feel good, the strength is there. I’m able to make plays and put it in the net still, so I’m happy about it.”

After the Knights went up 3-0 on an own goal, Flatley tacked on fourth goal, the junior getting a foot to a rebound to roll a shot inside the right post at 2:41.