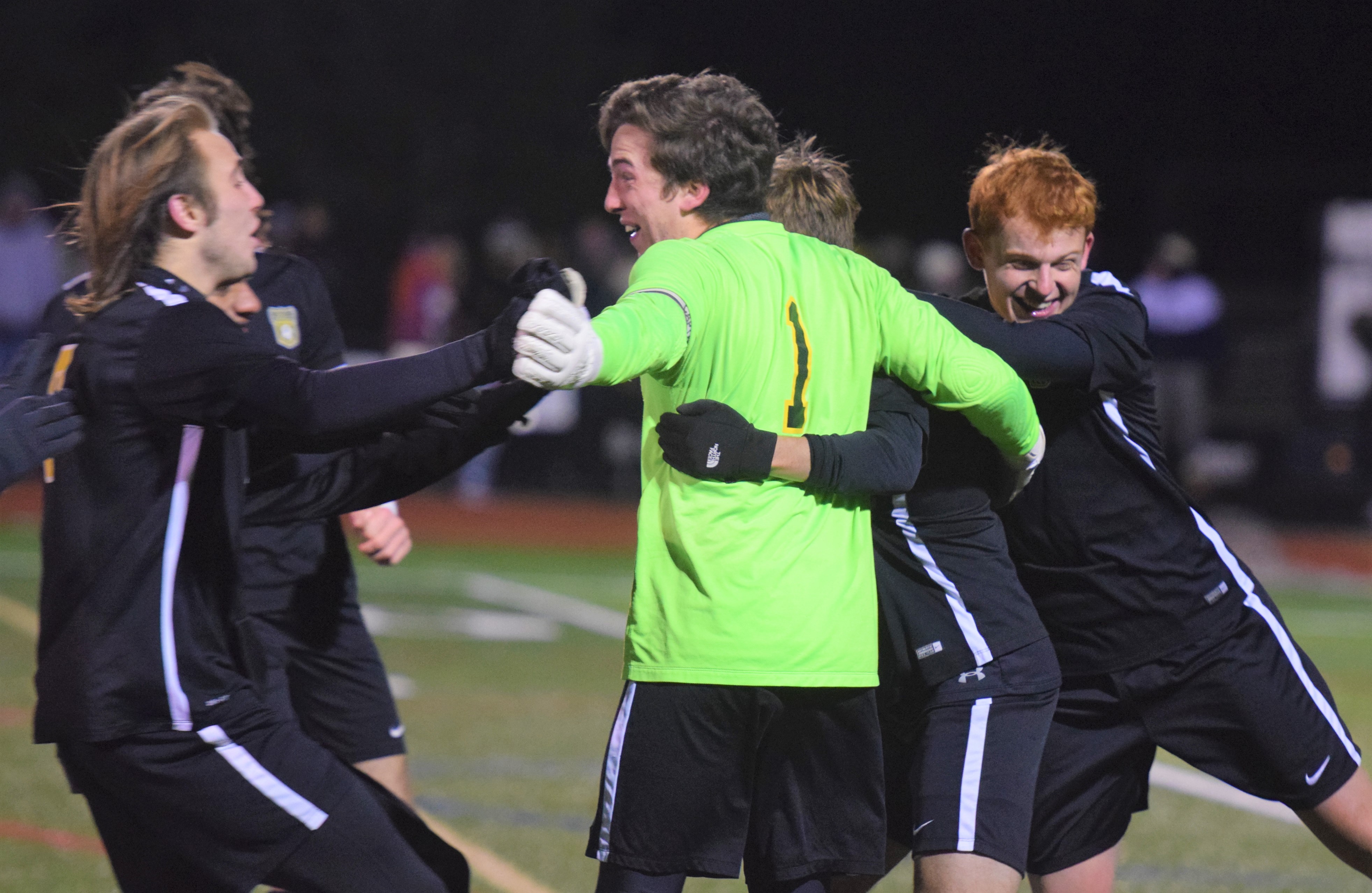 Lower Merion >> Goalkeeper Ryan Van Pelt stood on the line first to begin penalty kicks, the season and a trip to the state championship game on the line for his Central Bucks West boys’ soccer team.

He guessed right. He got a touch on the ball. But the ball, off the boot of Boyertown’s Nick Willson, still trickled in.

While the Bucks’ senior didn’t make that save, he was on to the Bears.

He proved it the next three attempts as the senior goalkeeper made three saves and teammate David Roy netted the clincher as Central Bucks West defeated Boyertown 2-1 (3-1 on penalty kicks) in the PIAA Class 4A semifinals Tuesday night at Harriton High School.

“It’s one of the best feelings honestly,” Van Pelt said. “Seeing them run up taking the PK and me guessing the right way gets my hopes up, and then me actually saving it is a whole other story. First one I got my hand to, but it wasn’t enough so I knew I had to do more for the rest.”

James Lutz, Benjamin Danzis and Roy all converted from the penalty spot to send the Bucks into the title game against familiar foe North Penn, a 4-0 winner over La Salle in Tuesday’s other semifinal. The Suburban One Continental rivals will meet for the championship on Friday at 6:30 p.m. at Hersheypark Stadium. Roy assisted on senior Reed Thompson’s goal in the 53rd minute for CB West (14-7-5) before Boyertown (22-3-2) drew level in the 63rd minute when sophomore Beckett Wenger got on the end of a bouncing free kick by Kolby Houck in the penalty area to tie it at 1-1, a scoreline that would remain for the final 17 of regulation and 30 minutes of overtime.

Tuesday felt a long way away from the regular season, when the Bucks were 7-6-5 and entered districts seeded 23rd.

“We know what we’ve all been through this season,” Roy said. “It’s been tough but we’ve grinded and we made it into the playoffs and we just keep going every game, never giving up, never backing down.”

While Boyertown’s run didn’t go as far as the final, the season will go down as the best in Pioneer Athletic Conference boys’ soccer history with a PAC championship, second-place finish in District 1 and trip to the PIAA semifinals, something no PAC large-school division team has ever been able to say.

“Right now it’s hard not to think about tonight, but I’m sure in a couple days it’ll really hit how far we’ve made it,” said Boyertown captain Ryan Foskey. “Every win, there’s been so many games that we could have lost and that would have been it, we would have gone home, but it didn’t happen. To last this long, it’s unbelievable. The group we’ve had, the friendship, the camaraderie, staying together, it’s been amazing. There’s nothing else I could ask for.” “The unity of this group has had, from the beginning I could see it. I knew we had a good group,” said Boyertown coach Mark Chambers. “I told them after the game, what you’ve given us as coaches, your school, your community and this program, it’s never been done before. Be happy. It’s not a (game to) walk off the field with your heads down. It’s a time to hold your head high because it’s been extremely successful and something they should never forget. It’s something I’ll never forget.”

It was a tight first 40 minutes Tuesday night, more about imposing style on one another — CB West’s aerial, more direct style versus Boyertown’s short-passing possession — limiting chances with tight defense, led respectively by Boyertown’s Foskey and CB West’s Bailey Moyer. Outside of a couple dangerous crosses from Wenger, the first half lacked good scoring chances either way. The game got its jolt with 27 left in regulation off a Boyertown giveaway in its own final third that resulted in the ball being half-cleared to Roy, who sent the ball goal-ward through a scrambling Bears defense for a tip-in by Thompson.

Ten minutes later, as Boyertown pressed to equalize, a free kick from the right side line from 35 yards wasn’t cleared and bounced in the area for Wenger to pounce on the bounce.

“It happened time and time again this year with us where we’ve gone down a goal but we’ve been able to come back,” Foskey said. “Obviously we would have wanted one more. The amount of times we did it (come from behind), it’s amazing. I think it says a lot about the character of the team.”

The Bears were on the front foot the rest of regulation but couldn’t find the game-winner.

Scoring chances improved both ways into overtime, Roy heading from a corner that forced a defensive save off the goal line by Bears’ midfielder Dimitri Randjelovic. With eight left in the first OT, a threatening Foskey header from a corner kick bounced wide.

CB West nearly ended it with 2 minutes left when a clash on the edge of the Boyertown 18 led to the ball caroming toward goal and Kanishk Nazareth in free on goal. But the senior blasted high and sent the game to PKs where Van Pelt played the hero. “It was unreal,” Roy said of Van Pelt’s performance. “I have trust in him every time sometime goes up there. I say his name twice, ‘Let’s go V, let’s go V,’ and I know he’s going to get them.”

Since entering districts as the No. 23 seed, the Bucks placed fifth in District 1 and in states have topped District 3 champ Central Dauphin and two runners-up: Mt. Lebanon of District 7 and now Boyertown.

It’s been an impressive three-year run for the Bucks, who reached the state semifinals in 2017 and then backed it up with a District 1 championship in 2018.

But that postseason run came to an abrupt end when they were upset by Central Dauphin 2-1 in overtime in the first round of states.

A year on, call this tour ‘redemption’, call it ‘revenge’, or call it what it is: a tour to Hershey.