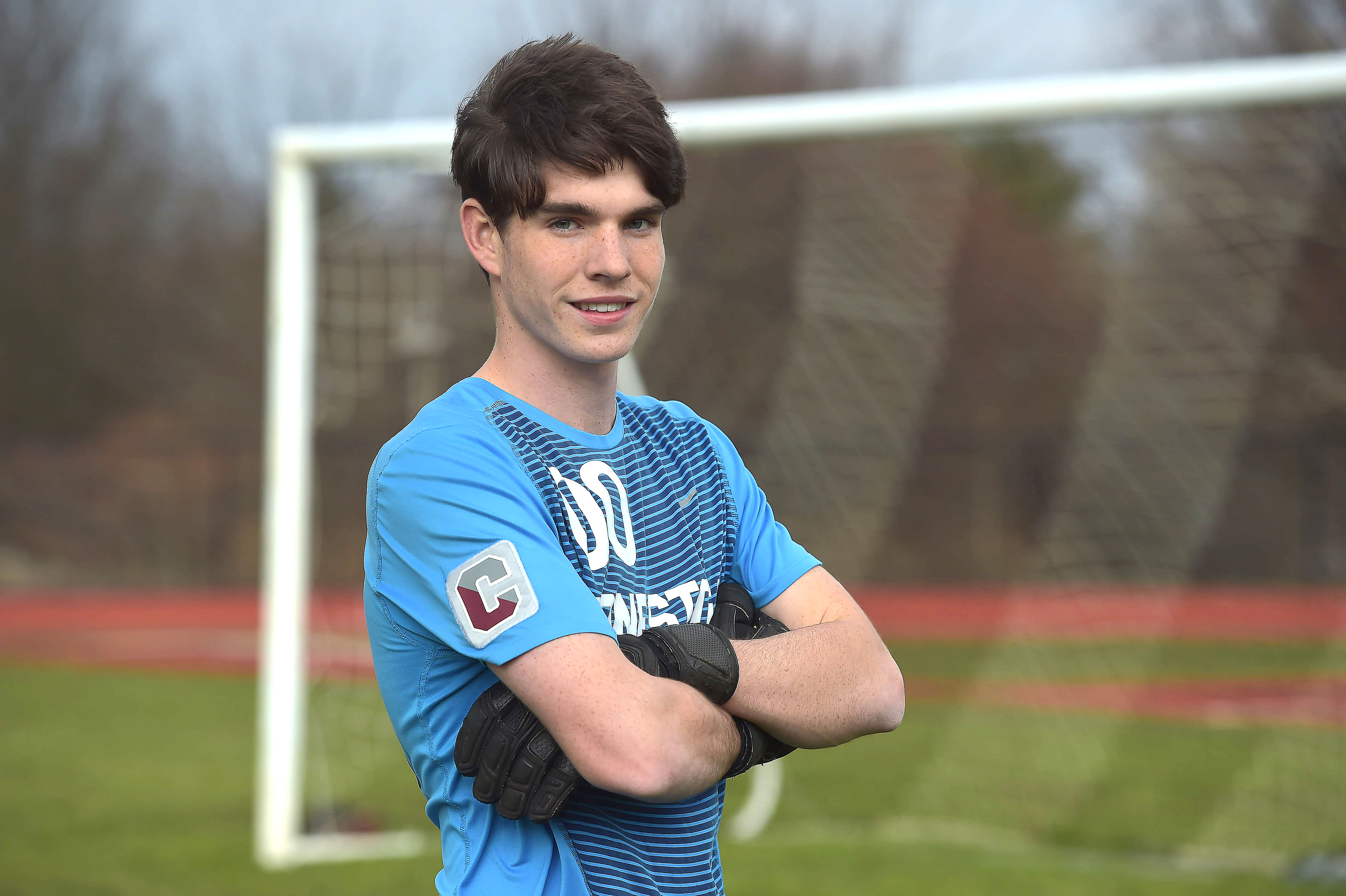 TREDYFFRIN >> Bob Andres of Berwyn is proudly spreading the word about the goaltender dynasty currently in place at Conestoga High School.

But it’s entirely understandable because Andres’ is talking about his grandsons Will Smith, Luke Smith and Charlie Smith. Will starred in goal for the Pioneers from 2013-2015, then Luke took over for the last three years, and Charlie will be a sophomore next fall with a chance to keep the position in the family for three more years.

“We’ll see what happens, but if Charlie plays well, there will be the potential of having a nine-year run from the same family,” said ’Stoga head coach Dave Zimmerman.

“And they are all perfectly spaced. I don’t know if that was intentional,” he laughed.

A multi-year starter and all-conference performer at Lehigh, Will was the Daily Local News Player of the Year as a senior. And now, three years later, Luke is the 2018 recipient.

“I became a goalkeeper because of Will,” said Luke, a senior who has committed to play collegiately at Bucknell. “But I don’t model my game after his because we are polar opposites. He’s 6-foot-5 and I’m 5-11, so we play a different style of game.”

Luke Smith’s final high school season featured statistics that stretch credulity: 0.18 goals against average; 17 shutouts in 22 contests; a total of four goals allowed. He was an easy first-team All-Central League selection as ’Stoga cruised to the title, blanking 10 of 11 opponents.

“Luke was, ultimately, the anchor of our defense,” Zimmerman said. “There was something reassuring about having him back there. It makes the guys in front of him more confident and more willing to play more aggressively because they know that even if something goes wrong, we’ve got him back there to bail us out.

“I call Luke our ace in the hole. We had a couple down cards and one of them is Luke, and he’s an ace. When push comes to shove, if there is one position you want to have a great player it’s in goal.”

The Devon resident has been playing soccer for as long as he can remember. But being a goaltender wasn’t on his radar until about five years in.

“When I was about nine, I saw my older brother playing goalkeeper and that’s when I started playing that position,” he recalled.

By the time he got to Conestoga, Will was already entrenched as the Pioneers’ starter. But after a year backing up his brother, Luke beat out two seniors for the job in 2016 and never looked back. In each of his first two seasons as the starter, the Pioneers won the PIAA 4A State Championship.

“You play to win a championship and those two seasons were so much fun,” Luke said.

“Where he stands out is his quickness,” Zimmerman pointed out. “He’s not the biggest guy, but he’s an unbelievable shot-stopper. He has lightning reflexes, is very athletic and has very good feet.”

“I’ve never seen a keeper that is as good as he is at distributing the ball. His kicks and throws are unbelievable. He can throw a ball on the line perfectly and hit a player in stride.”

Smith’s career milestones are also eye-popping: in three seasons with him in goal, ’Stoga lost just three times; he never dropped a match against a Central League foe (33-0); and he was a big part of continuing the Pioneers’ run of eight league titles in nine years and five in a row.

“I knew heading into this season that our defense was really strong, but I never expected only giving up four goals, to be honest,” Smith said. “A lot of the credit goes to me, but my defense was just as important as I was keeping those goals out.”

The only Central League team to score a goal against Smith in 2018 was Strath Haven, and even tough Conestoga won easily, he says: “I’ll never forget it. It was my fault and it still haunts me.” And then there was the amazing performance in a 2-0 win over rival Radnor.

“It was the greatest performance by a Conestoga keeper that I’ve ever seen,” said Zimmerman, who just completed his 17th season at the helm. “Luke just stood on his head and won us that game.”

Smith is already thinking about the 2019 soccer campaign, and the prospect of competing against his older brother at the college level. Lehigh and Bucknell are both in the Patriot League, and the two are scheduled to meet in October in Bethlehem.

“That would be a dream come true to play against by brother in college,” he said. “I remember subbing for him as a freshman in high school and thinking that I am finally being competitive with him. He was always so much bigger than me, so to be on the same level with him would be awesome.”

And, of course, Luke will be keeping a close eye on who winds up being his replacement in goal for the Pioneers.

“I’ve heard a ton about it from my Grandpa,” he said. “He is very happy there could be a nine-year Smith reign. He is the first one to brag about us and what we are doing.

“My brothers and I talk all the time about how awesome that would be.”