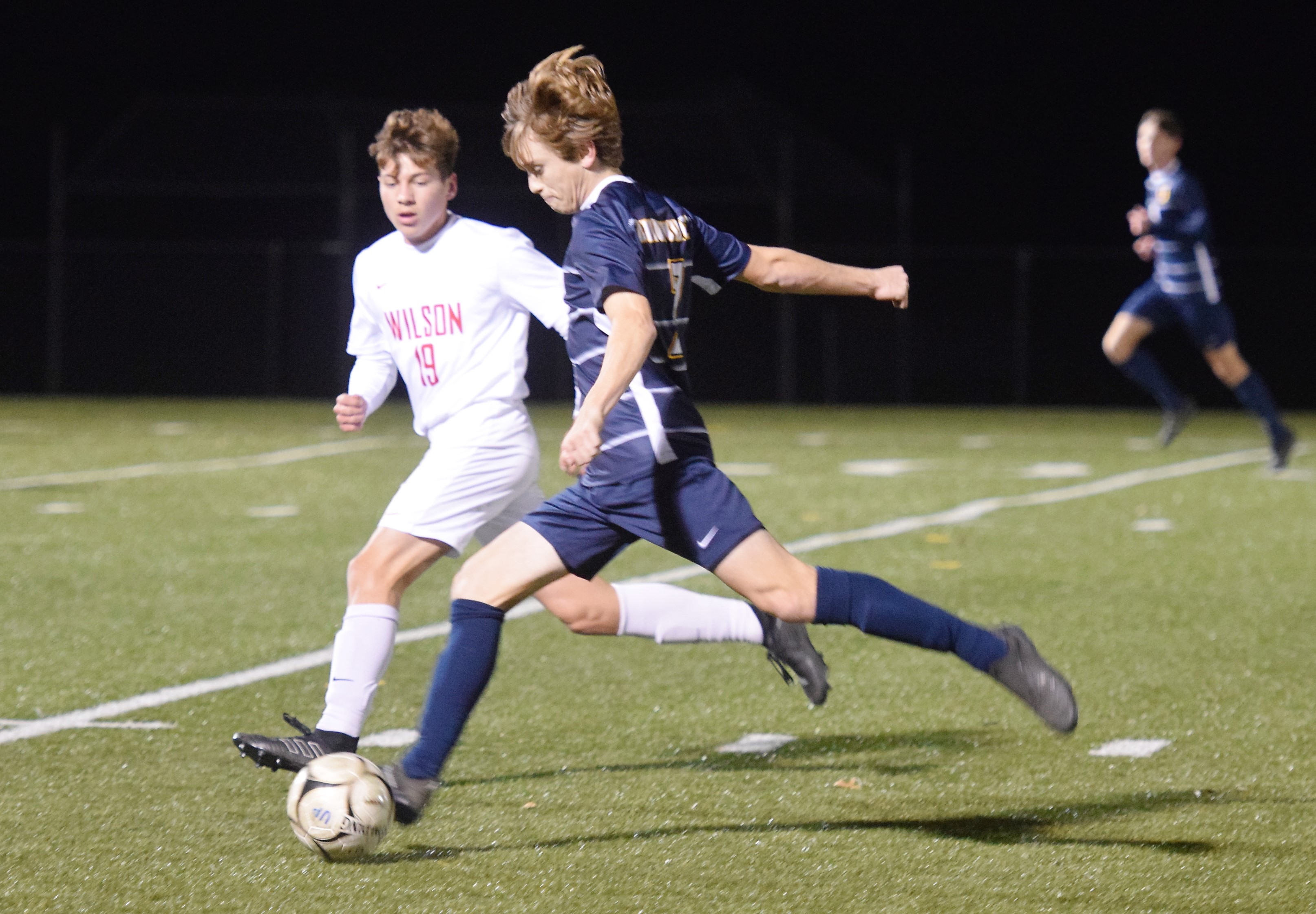 One of the area’s most dynamic strikers, DeLaney racked up 30 points (16 goals, 14 assists) for the Vikings, the co-Ches-Mont champions. He was a first-team All-Ches-Mont pick and will be playing for St. Joseph’s beginning next fall. “Ben is the only player from the Ches-Mont committed to a Division I school – enough said,” pointed out East head coach Charlie Dodds.

A dangerous forward, Muller scored 13 goals and chipped in eight assists, and was voted the team MVP. He was a first team All-Ches-Mont honoree in 2018 after being a second teamer in 2017. “Jackson is a dominant forward who can run and create opportunities,” said his coach Dave Whitcraft. “He is extremely strong on the ball and plays well with his back to the goal.”

Despite missing his junior season with a heart condition, Lopez rebounded to have an excellent senior year. He scored eight goals, had seven assists and was a runner-up in the voting for the Ches-Mont American Player of the Year. Blue Demons’ head coach Mike Barr calls Lopez a “skillfull, clever player.”

An All-Stater and Ches-Mont American Player of the Year, Hewes poured in 25 goals and added seven assists. He is a three-year starter with a knack for scoring in big games, including a hat-trick in the first round of the PIAA Playoffs. “Hewes was the best we played against,” said West Chester Rustin head coach Ryan Castle. “He was so dangerous in front of the goal and his movement off the ball was fantastic.”

The Ches-Mont National MVP, Martin played all over the field for the Warriors. He scored eight goals and added nine assists for Henderson, who won back-to-back division crowns with Martin as team captain. He was also named all-region and all-state. “Sam would start for any program in the area,” said his coach Sean Ryan.

A playmaker who drew defensive attention from every opponent, May scored five times and dished out nine assists. He is a two-year, first-team All-Ches Mont pick and was a unanimous choice in 2018. “(May is) calm and composed on the ball, always finding a killer pass to unlock a defense,” said Great Valley coach Dave Moffett.

One of the best defensive midfielders in the region, Ivey was selected to the All-Central League first team. He scored four goals, chipped in three assists and was ’Stoga’s most effective player on throw-ins. “Jason was our best ball winner both in the air and on the ground,” his coach Dave Zimmerman said. Ivey has committed to play soccer in college at Muhlenberg.

A two-time first team all-league pick and a three-year starter, Pinkston was the glue that anchored the Indians’ defense. He was a major factor as Unionville notched 10 regular season shutouts and three more in the postseason. He also scored the game-winning penalty kick in the PIAA Quarterfinals. “Garrett is an outstanding organizer and reads the game well,” said his coach Rich Garber.

Statistics alone certainly can’t quantify the importance Dooley added to the Vikings’ defense. He is a three-year, first-team All-Ches-Mont National pick as voted by league coaches, and has been a unanimous selection each time. Dooley scored two goals and added four assists. “His stats are low, but for a defensive guy, stats just don’t show up,” said his coach Charlie Dodds.

The Warriors won a district crown and four Ches-Mont National titles during his stellar career. Roberts was the linchpin in a defense that surrendered less than .5 goals per match this fall, and he added five goals and four assists. “In my opinion (Roberts) would be the top defender for any team in the Ches-Mont,” his coach Sean Ryan said.

A four-year starter and a two-time All-Ches-Mont pick, Good was named the league player of the year by the Southeast Pa. Coaches Association. He allowed just 13 goals in 20 outings, recorded a dozen shutouts, and even added a game-winning goal and an assist. He has committed to play college soccer at West Chester. “In my opinion, Dan was the best goalkeeper in the state,” said his coach Tom Creighton.

Unionville boys’ soccer mentor Rich Garber has pushed a lot of coaching buttons during his 18 years at the helm. But throughout a momentous 2018 season, Garber seemingly pushed all of the right ones. That’s why he is the Daily Local News’ Coach of the Year.

Despite a roster dotted with underclassmen, the Indians cruised to the Ches-Mont American crown by three games and then went on to advance to the semifinals of the PIAA 4A Playoffs. And along the way, Unionville made strides that surprised even Garber himself.

“I thought we might be a little better next season, but you never know,” he said. “This team caught me a little by surprise, but we have six guys who have been playing for three years. They’ve been though some battles, but I did not expect it to take off the way it did.”

In all, Garber has been coaching 34 years, including a 13-year stint as an assistant for Unionville legend Lee Krug. And even though 2018 was highly successful, it wasn’t all smooth sailing. After dropping three matches in a row, the Indians started the campaign 4-3.

“It was a struggle at times,” Garber said. “But this team was different. They had a lot of fun together. I’ve had other teams that were more business-like. At times I didn’t know what buttons to push. I didn’t want to ruffle the feathers too much, but I guess it wound up working.”

Unionville wound up dropping just one of its final 11 regular-season matches (1-0 to powerhouse Conesgtoga), finished fourth in the district tournament and then edged District 4 champion Williamsport and Central Dauphin on PK’s to get to the final four of states.

“This team worked pretty well together as a group and they grew as the year when on,” Garber said.

“In the districts after the Penn Wood game, I challenged some of the veterans. I said, ‘I can’t be yelling from the sidelines. I need it more from you guys on the field.’ And I thought they kind of took off after that.”