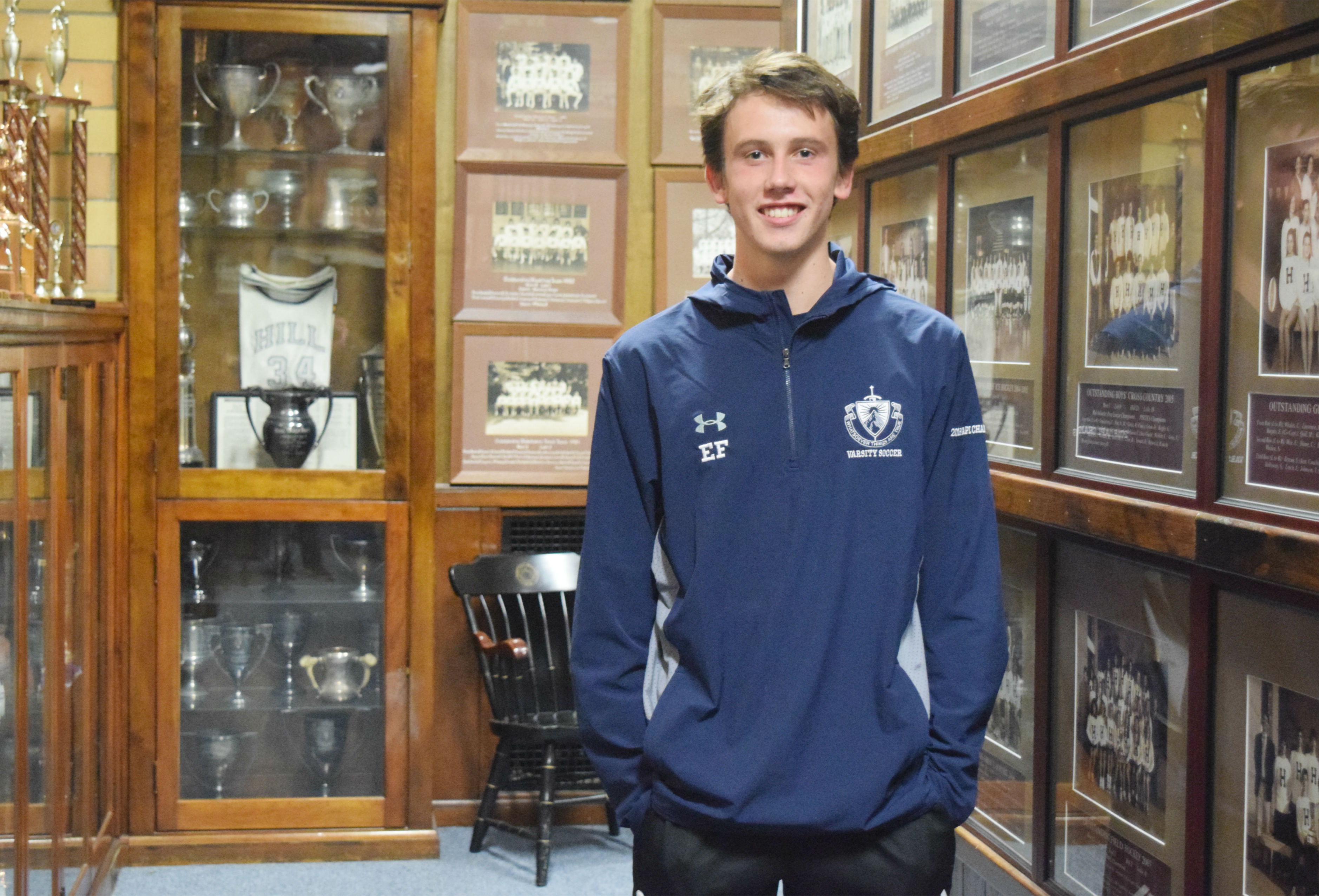 The Hill School boys soccer team was presented with a new locker room before the season. Located just off the soccer field in the middle of campus, the locker room has the feel of a professional team’s on a more compact scale, with individual wooden stalls, padded seats, a spot for each player’s name placard.

Like the rest of his teammates when they first laid eyes on it, Euan Forrest was in awe.

They had every reason to be, most of all Forrest. But his came filled with baggage.

“One of the lockers is the Forrest Family Captain’s Locker,” Forrest said. “That’s when I realized (the family’s legacy). The Forrest family legacy is something I prided myself on while being the only one remaining.”

Positioned in the center of the back wall, the Forrest locker sits next to the Van Beuren Family Captain’s Locker, the program’s other family to have three members come through as captains of Hill soccer. Inside the youngest of Cathy and assistant coach Sid Forrest’s three children was placards for brothers Jamie (2013) and Mark (2015) and a vacant spot for his future nameplate.

“They are definitely huge shoes to fill. My entire life I have been following in Mark and Jamie’s footsteps,” Forrest said. ”I’ve always relished the opportunity to match their legacies when I can and surpass what they accomplished. … It’s a lot to live up to.”

All Euan Forrest had to do was maintain the level of a program with a recent standard of contending for the Mid-Atlantic Prep League title and reaching the Pa. Independent Schools Athletic Association championship with a very inexperienced roster that graduated 12 seniors.

Yet the Blues leaned on their defensive continuity with Forrest and classmate/co-captain Aidan Sullivan returning together at center back in the early going while the rest of the squad found their health and form at the right time.

Despite a 3-6 start to the season, Hill kicked on at the proper moment to make an improbable 5-0 run through the Mid-Atlantic Prep League slate for its first league title since 2013 and ran its streak of reaching the PAISAA championship game to three (six out of seven seasons). Though Springside-Chestnut Hill denied the Blues a trophy-raising finish, Forrest fulfilled his family and Hill’s legacy and more than earned the nameplate for countless future Blues to see. Along with The Mercury’s All-Area Boys Soccer Player of the Year distinction, Forrest was selected to the High School All-American Game on Dec. 1. He became the third Hill player in the past six years to play in the match, joining past Mercury POYs Colten Habecker (2013) and Toni Adewole (2016), and fifth to receive All-American honors (including Ted Van Beuren in 2000).

“It’s something I’ve wanted as a personal goal of mine from the beginning of the season after seeing my name on the (Top Drawer Soccer All-America) Watch List,” Forrest said of his All-American Game selection. “In the weeks building up to it, I knew it was going to be coming out. I hadn’t gotten an email yet so I was kind of scared but when it came I was so excited. It was a great moment.”

It’s one thing he can say he has on his brothers, who had their own accomplished Hill careers that featured excellence as senior captains.

Jamie Forrest’s 2012 team won a Mid-Atlantic Prep League championship and began what has been a golden era for Hill boys soccer. Mark Forrest led the Blues to a Pa. Independent Schools Athletic Association championship and No. 2 ranking in the Top Drawer Soccer national prep rankings while earning Mercury All-Area Player of the Year status as a senior and finishing tops in school history in career assists (29) and career wins, third in career goals (50) and second in points (129).

“Expectation was certainly there, but no one put more of that on his own shoulders than Euan did,” Hill veteran head coach Chris Drowne said. “He knew better than his own brothers what they’d accomplished before him and wanted to at least meet those in some way. Even though all three are very different as people, players and as captains, their sense of responsibility is a common thread. Euan’s sense of duty was to uphold something not just for the family, but for the program knowing that they had led the program in other years to championships.”

Euan Forrest was determined to write a happy ending in the final chapter.

“It was something I had to leave a really big impact on. It’s up to me as the last member to go through Hill to leave the final mark on what our family has given to the Hill program,” Forrest said. “I think I can say it’s been one of the best experiences of all three of our lives.”

Forrest credits Drowne with placing him in his rightful position at center back, just like when Drowne turned Mark Forrest into a target forward, a move that led the middle Forrest to a fabulous recently-completed Lehigh University career that included two Regional All-American nods and First Team Senior CLASS All-American (awarded for excellence on the field, classroom and community) while becoming the Mountain Hawks’ No. 2 career scorer (41 goals, 103 points).

“Playing center back my sophomore year was the first time I’d played there,” Forrest said. ”It’s become my position, where I prefer to play, where I played in the All-American game, where my college coach sees me playing.”

Euan’s college coach will be the same as Mark’s. The youngest Forrest is also bound for Lehigh University.

A calm, instinctual defender, he was ever-present in the Blues’ back line from his sophomore year on, starting all 58 games in his final three seasons. He managed six goals and an assist as a junior and upped that total to eight goals and five assists as a senior, sizable totals for a defender. It wasn’t all the stuff of storybooks, though.

The Blues took a 4-1 defeat to South Kent School (No. 7 in Top Drawer Soccer national prep rankings) in their opener. After a pair of wins over Pennington Prep and Germantown Academy, a 4-0 drubbing from national No. 1 Berkshire School triggered a run of five losses in six matches.
Having been through the battles before, Forrest and center back partner Sullivan got caught trying to drag a team to a level it wasn’t yet ready for.

“It was really frustrating at times and that showed in a period where me and Aidan lost our cool way too much, a lot of yellow cards, yelling at people too much. When I was frustrated I wouldn’t play well and I think that rubbed off on the group,” Forrest said. “When I realized that if I stay calm and go with the flow and play my own game I’ll be playing better and it helped the other kids around me play better.

“That was a huge learning experience for me. If we look at the way Aidan and I grew over the course of the season, it was insane. We learned so much about understanding one another, understanding the team … that’s an experience that both of us will relish forever.”

The turnaround began following a 1-0 defeat to Springside-Chestnut Hill in a rematch of the 2017 PAISAA final on Sept. 29.

It firmly took hold, from Drowne’s perspective, when Hill rallied from three deficits to defeat Hun School 4-3 in its MAPL home opener on Oct. 13.

“Seeing the rest of the team step up and take some of the responsibility on its shoulders, and going on to win that match after trailing 0-1, 1-2, 2-3 to win 4-3, after that he realized we can win this league title and he didn’t have to be perfect every moment of every match to do it,” Drowne said.

After well-earned wins over Peddie and Blair, Hill clinched its eighth MAPL championship dramatically with a 3-2 win at Mercersburg on Oct. 27 and punctuated it with Forrest logging a goal and an assist in a 4-2 win over Lawrenceville on their rivalry weekend on Nov. 3.

“It had been five years, since Mark’s junior year. That’s always our main goal. First goal: MAPL title,” Forrest said. “My freshman year we didn’t come close. Sophomore year we had a really, really good team but couldn’t put it together in league play. Last year we had a great chance to win it and kind of choked in the last game.

“This year, it was very senior driven. The six of us, we knew it was our last chance so that was the goal from Day 1. Every game was super close, competitive. We hit our stride at the right time and found the right rhythm. I knew I would have to step up and score some goals, was able to do that against Peddie, Hun and then Lawrenceville. That meant a lot.” The Hill School’s Aidan Sullivan leaps into the arms of teammate Euan Forrest at the final whistle of their 4-2 win over Lawrenceville. (Austin Hertzog – Digital First Media)

The roll continued with three PAISAA tournament wins – a second win over talented Mercersburg in the semifinals – to reach the final despite being the No. 5 seed.

Hill clung to a tenuous lead entering the final 20 minutes of the title game, but Springside-Chestnut Hill hit overdrive once it got its breakthrough to repeat as state prep champions and denying the Blues the dream finish.

“Drowne announced at our banquet – both Jamie and Mark were there, which meant a lot – he is going to “retire” the number to make it an example of what a legacy can be left on the program.

“That was a really special moment for all three of us.”