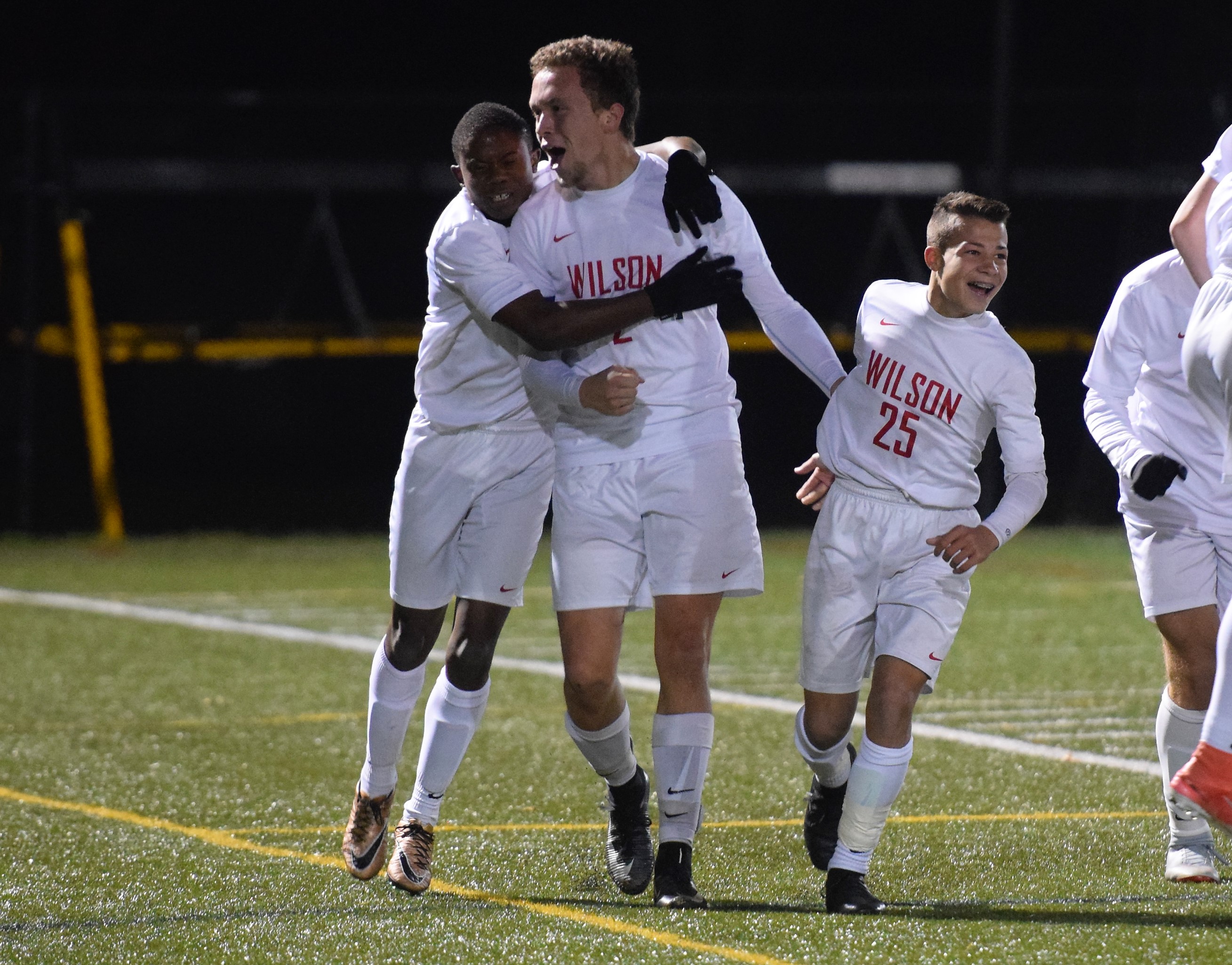 Wilson's Sage Klein, center, is congratulated by Patrick Ndambo, left, and Keegan Miller (25) after scoring the Bulldogs' second goal against Unionville in the PIAA 4A semifinals. (Austin Hertzog - DFM)

The Pennsylvania Interscholastic Athletic Association (PIAA) has vacated the Wilson boys soccer team’s state championship due to the use of an over-age player.

Wilson Superintendent Dr. Richard Faidley revealed the ruling in an announcement to the Wilson community on Dec. 11:

“We were notified yesterday by the Pennsylvania Interscholastic Athletic Association (PIAA) that its governing Board of Directors took action on our self-reported age-rule violation by a member of the Wilson High School Boys Varsity Soccer Team.

“As stated two weeks ago, when I first brought this unprecedented situation to your attention, we were duty bound to voluntarily report the apparent PIAA violation as soon as it was discovered.

“While PIAA’s decision is mandated by the by-laws which all member schools agree to adopt, it is important to note that the PIAA Board of Directors determined the age deception was an ‘isolated incident,’ and that PIAA was ‘sympathetic’ to the Wilson School District since the misconduct was ‘initiated by the family and student providing the school with false, incorrect information.’

“In fact, the PIAA Executive Director said, in response to the District’s report, that ‘the respect I have gained for the administration of the Wilson School District is immeasurable.’

“Although the PIAA’s decision nullifies the victories this season and vacates the state title, it does not erase the incredible effort of the team. We remain proud of our student athletes, their families, and our coaching staff, led by Head Coach Massimo Grande.

“Clearly, neither the coaching staff nor any teammate had any idea that one of their players was older than the PIAA-mandated eligibility age. To their credit, our student athletes have nothing but compassion for their former teammate, whose actions were clearly motivated by a love of the sport and his fellow athletes. With that said, we accept the decision of PIAA and now look forward, with great anticipation, to next season.”

Faidley and Wilson self-reported the violation to the PIAA on Nov. 29, leading to the two week investigation.