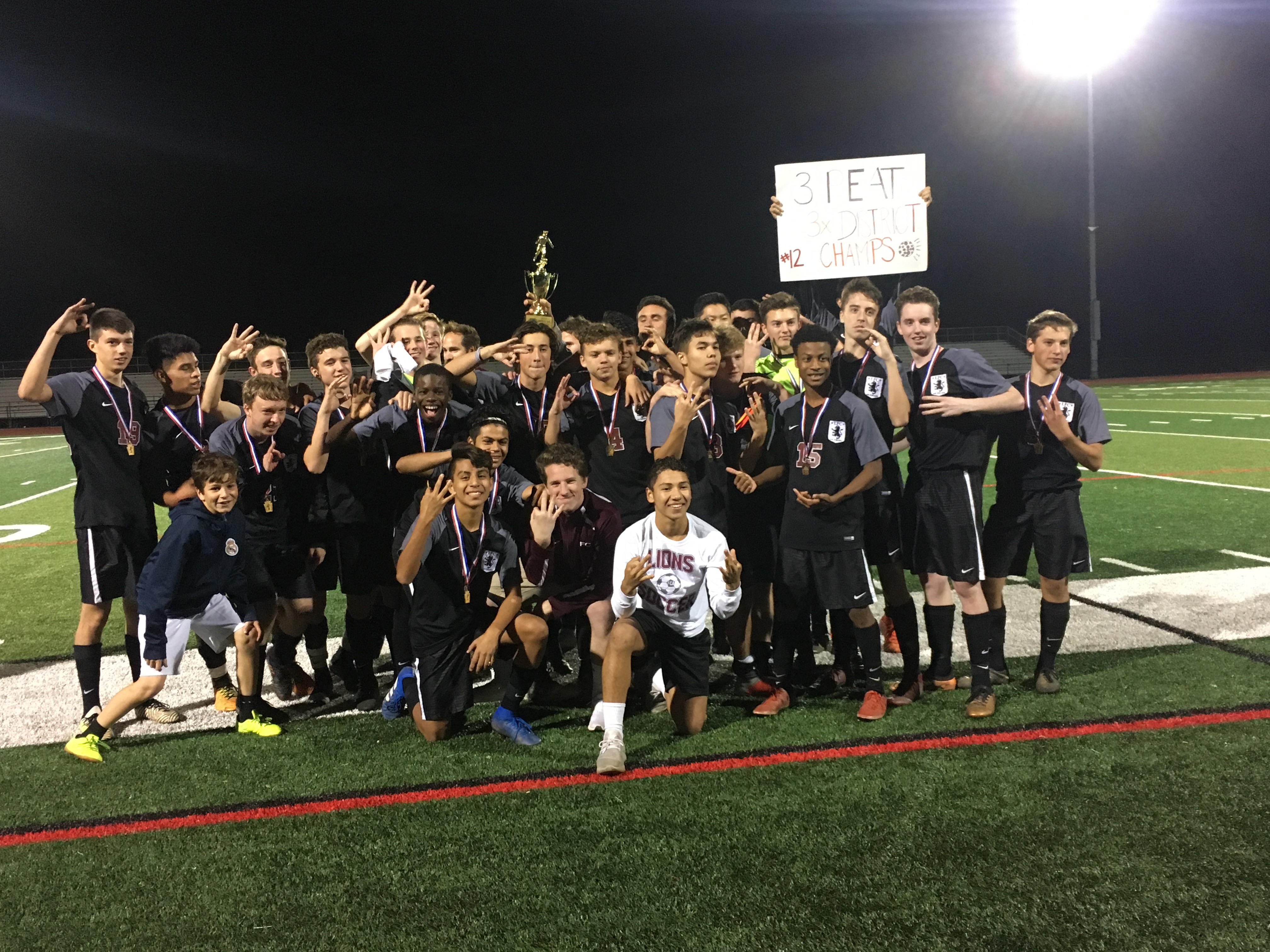 The Faith Christian boys soccer team poses for photo with the District 1-1A championship trophy after its 4-0 win over TCA in the final on Thursday, Nov. 1, 2018. (Andrew Robinson/Digital First Media)

It wasn’t surprising, given that the sides were playing for the third time this season. Then, Faith senior William Bolla subbed into the game and everything changed. What had been a fairly equal match turned overwhelmingly in FCA’s favor over a 25 minute span.

Faith used that spurt to bag its third straight district title with a 4-0 win over the Crusaders at Plymouth Whitemarsh.

TCA has tremendous speed in its striker pairing of Jesse Brittain and Grant Sareyka, so the Lions wanted to make sure early they didn’t get loose and snare an early goal. Sareyka didn’t make it easy with his work rate up top, but it seemed every time he got in on run, three or more dark jerseys met and stopped his advance.

The Schuster-Bolla connection showed pretty quickly once the senior forward subbed in. A shot by Schuster was stopped, but not controlled, leaving the ball loose for Bolla to put away with 24:48 left in the first half.

“This is a team that all year had no struggle with finish and tonight you have to give credit where credit is due,” TCA coach Andrew Gordon said. “Faith had a good game plan. Congrats to them, but for us, we have a young core and this is a place we plan on coming back to.”

With a roster that contained just four seniors, none starters, the Crusaders ended their most successful season since joining the PIAA with plenty of promise. They were just done in by a team ready to capitalize on any miscue and some unfortunate breaks.

Bolla had a shot saved out for a corner and Schuster’s ensuing service into the box seemed to nick Bolla’s heel before a TCA defender went for a clear and accidentally booted the ball into the back of the net for an own goal. For the Lions, the match was a tipping point.

“We saw a chance to keep on the pressure and not let down,” Schuster said. “Putting those four goals away in the first half was huge. The confidence definitely rose after the first goal, our attack changed because were sitting back a little bit so we played more defensive until that first goal.”

The Faith Christian boys soccer team celebrates its 4-0 victory over TCA in the District 1-1A final on Thursday, Nov. 1, 2018. The district title in the third straight for the Lions. (Andrew Robinson/Digital First Media)

It didn’t take long for Bolla to again put the pressure on. He took another shot, this one again saved but not covered and senior Isaiah Robinson was there with a  timely trailing run to head home a 3-0 lead. While Bolla continued to seek another, putting two more shots on target, the final Lions goal came from David Brownell, who tapped in a Schuster cross in the six-yard box.

The entire outburst had taken less than 19 minutes of game time and had Faith in prime position.

“We have 10 seniors and 10 juniors on the squad, some are hurt so we dressed some freshmen who will be a big part next year, but they like playing together,” Clymer said. “They’ve played together now for three years, that’s a huge deal. When you play together a lot and have been together since junior high, that makes all the difference. If you like playing with the people around you, you’re going to give them the ball more often.”

Faith managed the game well in the second half but TCA didn’t go quietly. A corner kick set Sareyka up for a golden opportunity, but the junior’s point-blank header was well saved by FCA’s Chase Peev and Joel Griffin’s follow-up went wide.

“It’s a stage that’s new to us, but I’m sure will become familiar, it’s an incredible experience for our players but we’re not satisfied with that either,” Gordon said. “We had to take it one step at a time, there were some things we wanted to change and some things we couldn’t change, it was bad luck. It’s the mindset we went out there with, it just didn’t quite happen.”

Peev, a senior, ended up with five saves to pick up the clean sheet.

“We’re not the most talented team, but hard work got us here,” Peev said. “We enforce hard work, it’s what our coach enforces every year and we aim to be the hardest working team out there.”

Faith Christian will face District 12-1A champion Devon Prep in the opening round of states.

“We feel good going in and now we get to play against some good, quality teams that are out there,” Schuster said. “We can see how we match up against them. Last year, we saw a quality team in Camp Hill and saw we can compete with them so this year we’re hoping it’s more than one game and done.”