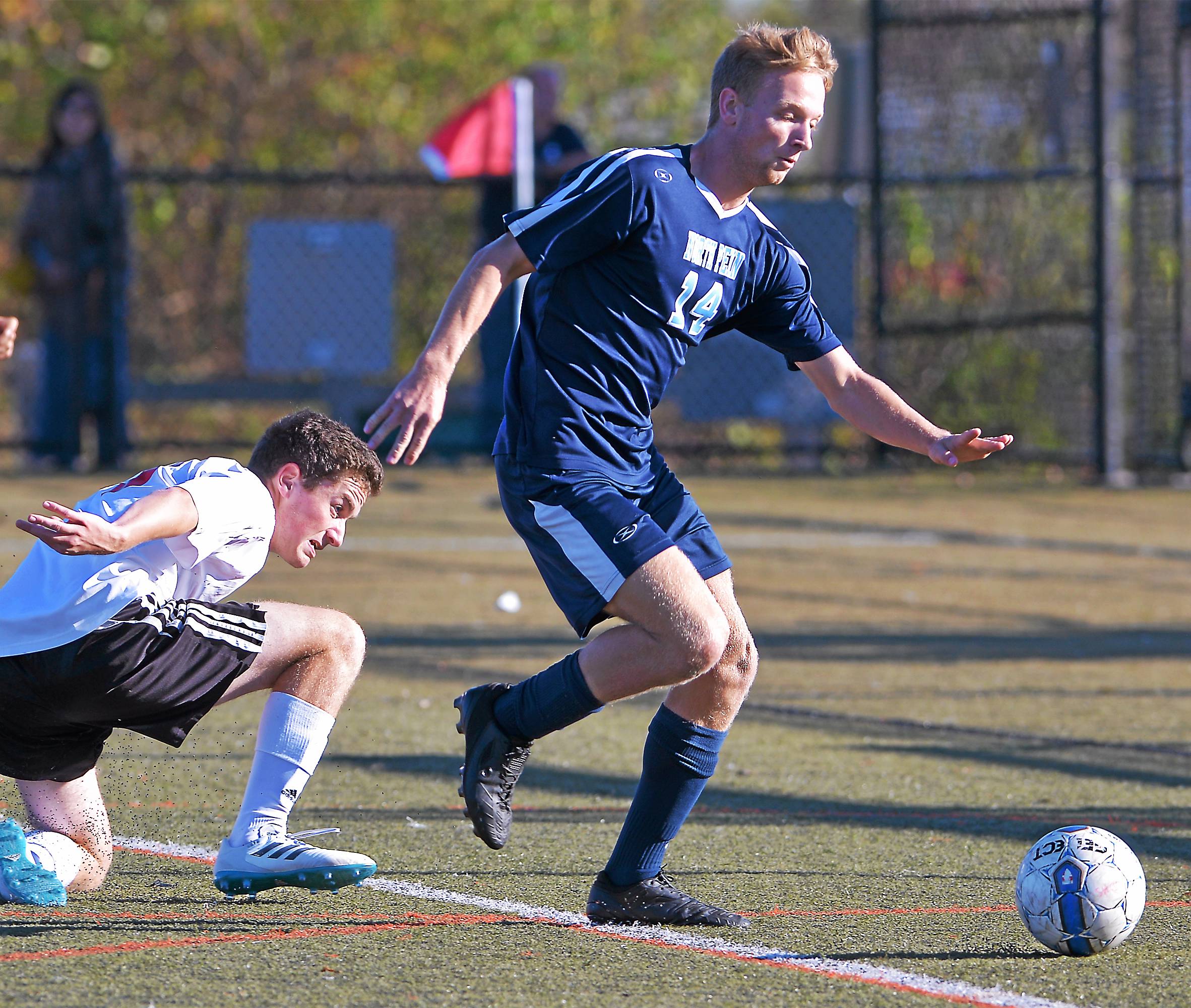 Every high school soccer team’s ultimate goal is to hoist a championship of some kind.

Once again, there are a score of boys’ teams in the Reporter/Times Herald/Montgomery area eyeing up a title chase this fall. Whether it be a league or conference crown, a district title or even the state championship, expectations are high across the board as a host of talented players return to the pitch.

If the past few seasons are any indicator, those titles may not be decided until the final few matchdays of the season.

North Penn enters the season looking to defend its back-to-back SOL Continental titles but also looking to make up for a disappointingly early exit in the District 1-4A tournament. The Knights, again led by veteran coach Paul Duddy, are facing their now-yearly challenge of replacing some key players. Luckily for North Penn, there are a few cornerstone players back like forward Luke McMahon and midfielders Carter Houlihan and Aiden Jerome.

La Salle has stood atop the Philadelphia Catholic League the past two falls, but both titles have been anything but walkovers. The Explorers have a lot of pieces to replace, chiefly last season’s PCL MVP in standout goalkeeper Brett Werner and attacking catalyst Jacob Mittman but they too have a foundation. Rock-solid defender Cole Hammel and talented scorer Chris Metzler headline the returners for coach Tom McCaffery in a Catholic League that looks as deep as ever. Roman Catholic has been right there with La Salle the last two years and St. Joe’s Prep had a really good 2017 as the 4A contenders but Archbishop Wood has made its mark in the PCL the past two seasons in 3A. The Vikings have made the last two PCL semifinals, won the last two District 12 titles and advanced all the way to the state semifinals last year. Coach Hugh Kelly has a strong core but also has some pretty pivotal roles of his own to fill this season.

The SOL American was one of the best conference title races last season, with Hatboro-Horsham outlasting very game Upper Dublin and Wissahickon sides to take the crown. Those three, along with Plymouth Whitemarsh, made the District 1 tournament and the conference only gets better this fall as Abington jumps into the mix after leaving the SOL National.

Not only do the Hatters have a target on their back, they have to replace some of last season’s top players. Plus, it’s a safe bet that UD, Wissahickon, PW and Abington will be strong sides, so that could be another championship picture that’s muddled until the last week of the campaign. Central Bucks West factored heavily into the SOL Continental title race and while the Bucks didn’t win it, they got further than everyone by advancing to the state semifinals. All-state standout Tarin Morris is in college now, but most of his teammates return including brick wall goalkeeper Dylan Smith.

In the PAC, Upper Merion found itself in a late-season positioning battle, eventually securing a spot in the league’s final four playoff tournament. Trevor Looby returns to lead the Vikings as they try to build off last season’s District I playoff appearance.

Four local teams will have a chance to compete at the home of the Philadelphia Union. Upper Dublin and Wissahickon will play at Talen Energy Stadium on Oct. 16 while Pennridge and CB West will face off on Sept. 29.

ABINGTON FRIENDS
2017 Record: 2-11-2
Coach: David Urbach
Key Losses: Nick Sinni, Raphael Jones, Jordan Kurtz, and Sydney Jones.
Players to watch: Kai Haynes(M), Noah Mass(GK), Davis Shenkman(D)
Outlook: “We will have a young, athletic team going into this season.  With several returning starters and some key additions, we will be looking to improve from last year and we are looking forward to a bright future.” CENTRAL BUCKS WEST
2017 Record: 18-7 (9-3 SOL Continental)
Coach: Stefan Szygiel
Key Losses: Tarin Morris, CJ Lang
Players to Watch: GK Dylan Smith, Nick Centenera, Carson Snyder, Bailey Moyer, Reed Sturza, Alan Zlotin
Outlook: The Bucks lose a special talent in Morris, but there’s a very stacked roster returning in Doylestown. CB West has been a factor in the SOL Continental race recently and last season’s long postseason run should only serve the returning players well when they find themselves in a tight match this fall. Smith is a top keeper, and he has a strong defense back in front of him.

CHELTENHAM
2017 Record: 5-11-2 (3-9-2 SOL American)
Coach: Bill Tonkin
Outlook: “We lost 12 seniors from last year’s team. We are looking forward to seeing our returning group and some of our new additions perform well in the upcoming season. We are looking to build on last year and make a run at the playoffs.”

GERMANTOWN ACADEMY
2017 Record: 5-13-1 (2-8 Inter-Ac)
Coach: Kurt Wetzel
Key Losses: Joseph Battisto, Oliver Buck, Michael Capone, Harrison Combs, Miles Hanamirian, Ian Lugossy, Andrew Luo, Michael Roman
Players to Watch: Drew Budinsky, Ethan Cody, Ian Cummings, Grant Giampalmi, Jacob Kotik, Mihir Savani, Pedro Sobral, Jamie Werther
Outlook: “The Inter-Ac is a tough league, and our biggest strengths and weakness will be two in the same: our youth and our energy. The numbers of boys who were out for summer training, and the work they put in, bodes well for the coming season. The boys will need to play as a team, and work as a team in order to earn victories this year at all levels of our program. From the coaches standpoint our outlook is simple: to play to our potential, and be ‘in’ every game. From there it will be up to the boys on the pitch and their ability to overcome what each game metes out.”

LA SALLE
2017 Record: 19-1-2
Coach: Tom McCaffery
Key losses: Brett Werner, Jake Mittman, Joe Brigidi, Bob Bohner, Chris Marzullo, Gio Randazzo, Max Mocharnuk, Chris Lenge, Jack Smyth, Sean Grant, Kyle Natter, Bernie Lindinger, Jack Donohue and Christian Calabretta
Players to watch: Cole Hammel, Chris Metzler, David Steinbach, GK Owen Ranck
Outlook: “The Catholic League is shaping up to be very difficult this year. There are teams throughout the league that will play at a very high level. We are hoping to continue to play well through our league schedule while competing with teams throughout the area in our non-league matches. We hope to have a chance at the end of the season to have continued success in the playoffs.” PLYMOUTH WHITEMARSH
2017 Record: 13-6-1 (10-4 SOL American)
Coach: Ryan Brazuk
Key Losses: Ryan Heaton, Kenny Diamond, Stephen Longo, Blake Rosen
Players to Watch: Jacobe Sandcroft, Tommy Hoy, Evan Elgart
Outlook: The Colonials will have to replace the impact of 12 departed seniors off last season’s district playoff team. PW intends to be in the mix in what looks like a very tight race in the SOL American and proved it could compete with the top teams in the conference last fall. UPPER DUBLIN
2017 Record: 12-6-1 (10-3-1 SOL American)
Coach: Andy Meehan
Key Losses: Jerry Bardol, Kevin Devlin, Quinn Middleton, Max Adams, & Ryan Huggins.
Players to watch: Colin Asper, Matt Yoon, Pat Roller, Alex Goldenberg, Corey Schonberg, Jordan Kahny, John Visher.
Outlook: “We lost a number of seniors this past season but we have another strong and hungry group of players looking to fill the those roles. Our captains – Colin Asper, Pat Roller, Alex Goldenberg and Matt Yoon – have stepped into a leadership role and will be key contributors for this year. We are motivated to build on what we did last year and we expect Upper Dublin HS to be competing for a conference championship this year.” Upper Merion’s Trevor Looby, left, celebrates after scoring on a free kick in the first half against Phoenixville in the PAC semifinals. (Austin Hertzog/Digital First Media)

UPPER MERION
2017 Record: 9-8-1
Coach: Thomas Dodds
Key Losses: GK Dylan Castillo, Yaseen Elarbi
Players to Watch: Trevor Looby, Carlos Garcia, Sam Tepe
Outlook: “We are young in experience but we have many high character players who will put their best effort in to succeed. It will be enjoyable to build this team into a competitive squad.”