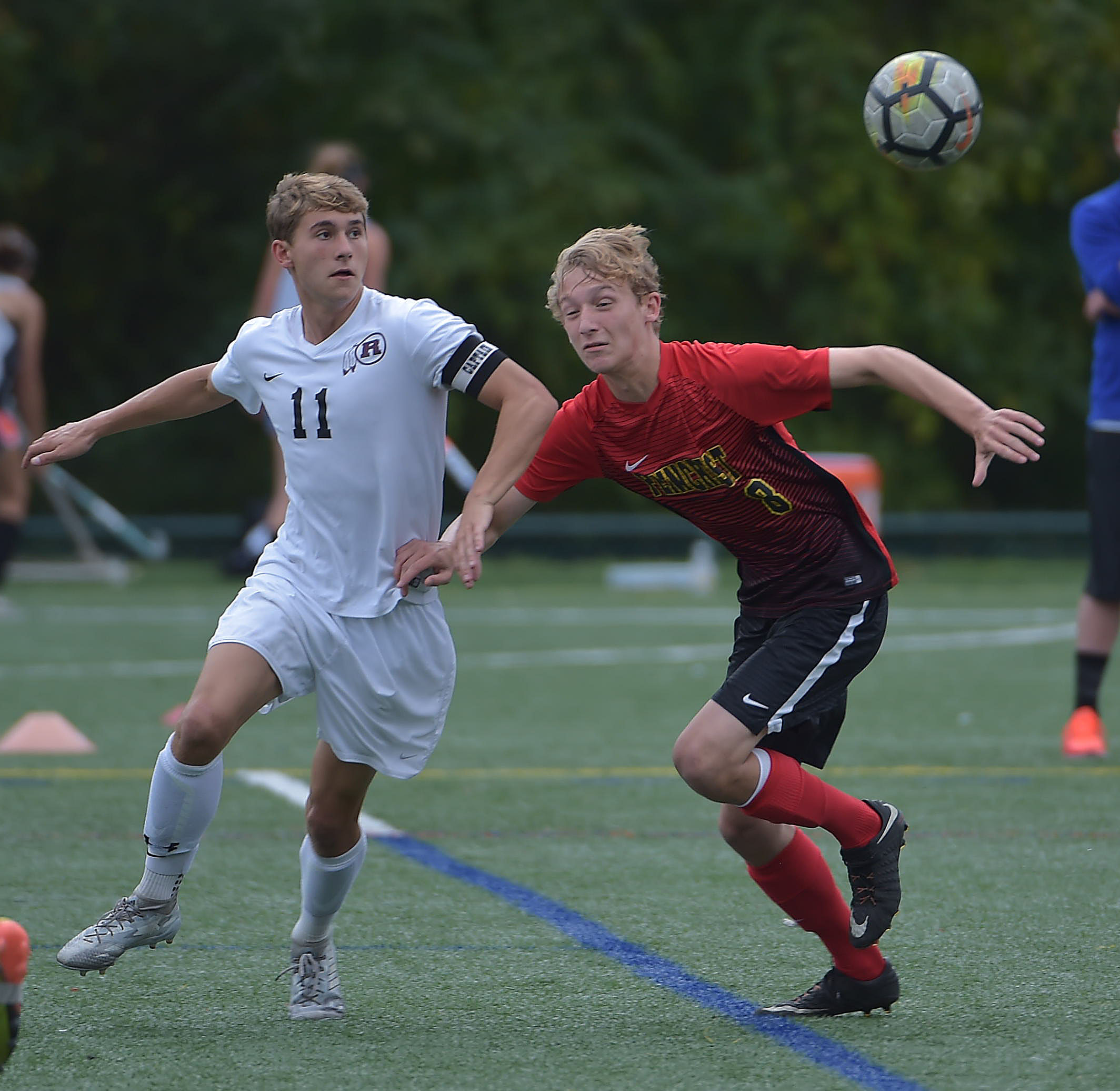 In addition to Player of the Year Lansana Doumbouya, the rest of the All-Delco team includes:

Penn Wood goalie Goodwill Agbaadem, seen in a game last year, posted a 13-3-3 record with nine shutouts to lead the Patriots to a second District 1 Class 4A playoff win in as many seasons. (DFM File)

Goodwill Agbaadem, Penn Wood: A starter between the posts since his sophomore year, Agbaadem brandished the consistency to rise to All-Delco level this year. The penchant for big saves has always been there – as in his stop of a penalty and then two denials of PKs in the shootout win over Downingtown East in the district playoffs in 2016 attest. This year, he posted a 13-3-3 record with nine shutouts, including a five-save denial in a 1-0 win over East in the first round of the District 1 Class 4A playoffs this year.

Johnny Cunningham, Episcopal Academy: Though undersized, the senior center back’s tenacity on the backline helped the Churchmen limit opponents to 17 goals in 26 games, even as they rotated in two talented but unproven goalkeepers. Cunningham and Nick Wallick forged a prosperous partnership, Cunningham landing on the first team All-Inter-Ac and Wallick on the second. The Churchmen kept 14 clean sheets, including nine during a 14-game winning streak to open the season. Cunningham also scored three goals to go with two assists. He scored twice in a 3-0 win over Lawrenceville and added the only marker of a loss to Springside Chestnut Hill in the PAISAA semifinals.

Josh Mason, Strath Haven: For the benefit of the team, the senior three-year starter switched to center back this year after playing as a forward for most of his high school career. The impact was obvious for Strath Haven, which won 12 games and returned to the District 1 Class 4A tournament. Mason still flashed his goalscoring ability on occasion, with two goals and two assists, none bigger than the equalizer with 5.5 seconds to play to force the Panthers’ districts opener to overtime, an eventual 3-2 win for Owen J. Roberts.

Carlos D’Anjolell, Penn Wood: The senior center back anchored a talented defensive unit that allowed just 21 goals in 20 games, helping the Patriots to the No. 12 seed in the District 1 Class 4A tournament and a second straight year with a postseason win. D’Anjolell was a stabilizing presence in the center of that defense, often paring with Philip Washington to produce the speed and size needed to keep opposing teams at bay. The stinginess helped pave the way for wins over Lower Merion, Strath Haven and Garnet Valley, plus a draw with Radnor.

Andrew Weir, Garnet Valley: The senior midfielder orchestrated the Garnet attack from his deep-lying central midfield position. For a side that scored just 19 goals, Weir’s six goals and two assists bore an outsize importance. He tallied the game-winning goal in a 3-1 triumph over Haverford and did the same against Springfield, adding an assist in that 3-1 decision. Weir also scored goals in Central League victories over Ridley and Penncrest. Weir was an All-Central pick who will continue his career at La Salle University.

Harrison Malone, Episcopal Academy: As injuries deprived the Churchmen of leading scorer Spencer Higgins before the Inter-Ac schedule started, Malone stepped up to fill the void. The junior midfielder finished third on the team with eight goals and five assists, helping EA win 21 matches. Malone scored three goals on the Churchmen’s opening jaunt in North Carolina. He set up both goals in a 2-0 win over Hill School and scored twice to get past Peddie School, 4-2. Malone’s goal made the difference in a 1-0 win against Penn Charter, and he also scored the opener in a 2-1 overtime win over Haverford School in the PAISAA quarterfinals. Malone, who was part of the Eastern Pennsylvania ODP team that captured a national championship earlier this year, was a second-team All-Inter-Ac selection.

Parker Gravina, Haverford School: The senior midfielder was the primary offensive playmaker on the Fords in a season where their firepower was diminished without steady finishing up top. Nonetheless, the All-Inter-Ac pick netted two goals and dished eight assists from his wing position. He provided a goal and an assist in a nonleague win over Kiski School and dished four of his assists in Inter-Ac games. He also provided an assist in a 2-2 draw with PIAA Class 4A champion Conestoga and provided a goal or an assist in each of the fords first three games.

Andrew Nmah, Penn Wood: The senior midfielder and repeat All-Delco was the leader of the Patriots’ explosive attack. He led the way with 19 assists to go with 12 goals, all while controlling the game in central midfield with his two-way play. He scored twice in a midseason win over Interboro and chipped in a goal in a draw with Academy Park, as the Patriots finished second to the Knights in the Del Val but for a second straight season won a District 1 Class 4A playoff game. Nmah was one of the stars of that triumph, a 1-0 win over Downingtown East; his run created the space eventually used by Varnie Sele to volley home the only goal.

Ryan Peter, Radnor: The senior All-Central selection was the consummate finisher, tallied 17 goals on the campaign to go with an assist. Four times this season, he handled all of the Raiders’ scoring in a game – in a 2-1 overtime win over Harriton, a 1-0 dismissal of Strath Haven, a 2-1 triumph over neighbor Carroll and the regular-season capping 2-1 win over Wissahickon. Peter added a hat trick against Springfield and braces against Penncrest and Upper Darby in Central League play.

Nate Perrins, Strath Haven: The junior forward returned from a junior campaign lost to a knee injury with fury, finishing third in the county in scoring with 21 goals and 10 assists. He collected them in bunches – three against Marple Newtown, three against Archbishop Carroll, three (and an assist) against Penncrest. Perrins scored the game-winning goal as part of a two-goal, one-assist day to beat Garnet Valley, and he had two goals and two assists as Haven won a thriller with eventual states qualifier Kennett, 5-4. He also set up Mason’s equalizing goal against Owen J. Roberts in the District 1 Class 4A first round. Perrins was an All-Central League pick.

Cam Morse, Haverford: The junior forward was limited to 15 games due to injury, but he made the most of them by scoring 18 goals to go with three assists. Four times, Morse tallied hat tricks this season. He scored three times in a 4-0 win over Souderton and in a 7-3 shootout with Penncrest. Morse was an All-Central pick.