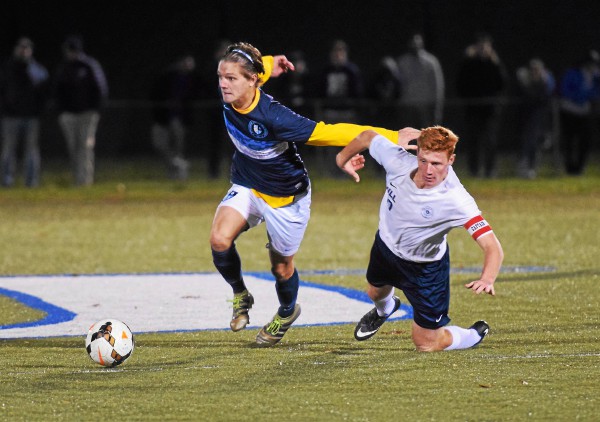 IMMACULATA >> Memories of their previous meeting with The Hill School were fresh in the minds of the players on the Springside-Chestnut Hill boys soccer team.

No surprise there, even though the teams last played two months ago. They were still strong enough to fuel the Blue Devils’ desire to write a different ending to their prep school state-championship script.

SCH did so Wednesday evening at Immaculata University’s Draper Walsh Stadium. The Blue Devils made first-half offense hold up for a 2-0 victory over the Hill in the Pennsylvania Independent Schools Athletic Association’s (PAISAA) championship game.

A pair of goals by Philip Burckhardt provided the Devils (19-3-2) their margin of victory. Stout defense by the likes of Vincent Sciarrotta, Michael Buck, Matthew Greenberg and Jack Myers secured a different finish for SCH.

“We have a different mindset,” Burckhardt said after the Devils prevented the Hill (13-6) from repeating as PAISAA champs. “We lost to them at the beginning of the year, so we wanted to get them.”

That first go-round was notable by the fact SCH had a 2-0 lead after the first half. The Hill responded by tying the game up in the second half, then winning it in the overtime period.

But that fate was not to be repeated in the state-title arena this time around. The Blues were limited to just one shot on goal and three corner kicks on the night, and were unable to recover from SCH’s early scoring.

“Defensively, they (the Devils) were excellent tonight, as they were all year,” Hill head coach Chris Drowne said. “They were in excellent shape. We knew we weren’t going to get many opportunities, so we had to make them count.”

The SCH win cut into a successful run by the Blues, who had won three of four PAISAA titles in the four previous seasons. They came into the game having won six of their previous seven previous outings, the string interrupted only by a 2-1 loss to archrival Lawrenceville School on Nov. 4.

Burckhardt scored Springside’s first goal at the 25:14 mark of the first half on a shot that angled from the left side of the goal. Dane Harmaty was credited with the assist.

The junior then added insurance by converting a 23-yard free kick near the seven-minute mark. That ended up being enough offense to send the Blue Devils toward the state title.

“We wanted to strike early,” he said. “Getting that first one in felt good.”

The Hill had a promising opportunity to get on the scoreboard at the 29:12 mark of the second half, a forward rising above the crowd in front of the SCH net to head the ball. But his shot missed.

“Because they didn’t play well,” Drowne said, “it will be more frustrating. But I told them this does not override a good season and tournament.”

NOTES >> SCH held an 8-1 edge in shots on goal, took 17 direct kicks to the Hill’s 10 and had a 7-1 advantage in indirect kicks. … The Blues previously were state runners-up in 2011 and 2012 … The Hill had been ranked first in Pennsylvania and 403rd nationally. … The PAISAA girls soccer championship game played earlier, Springside-Chestnut Hill edged Episcopal Academy 1-0.