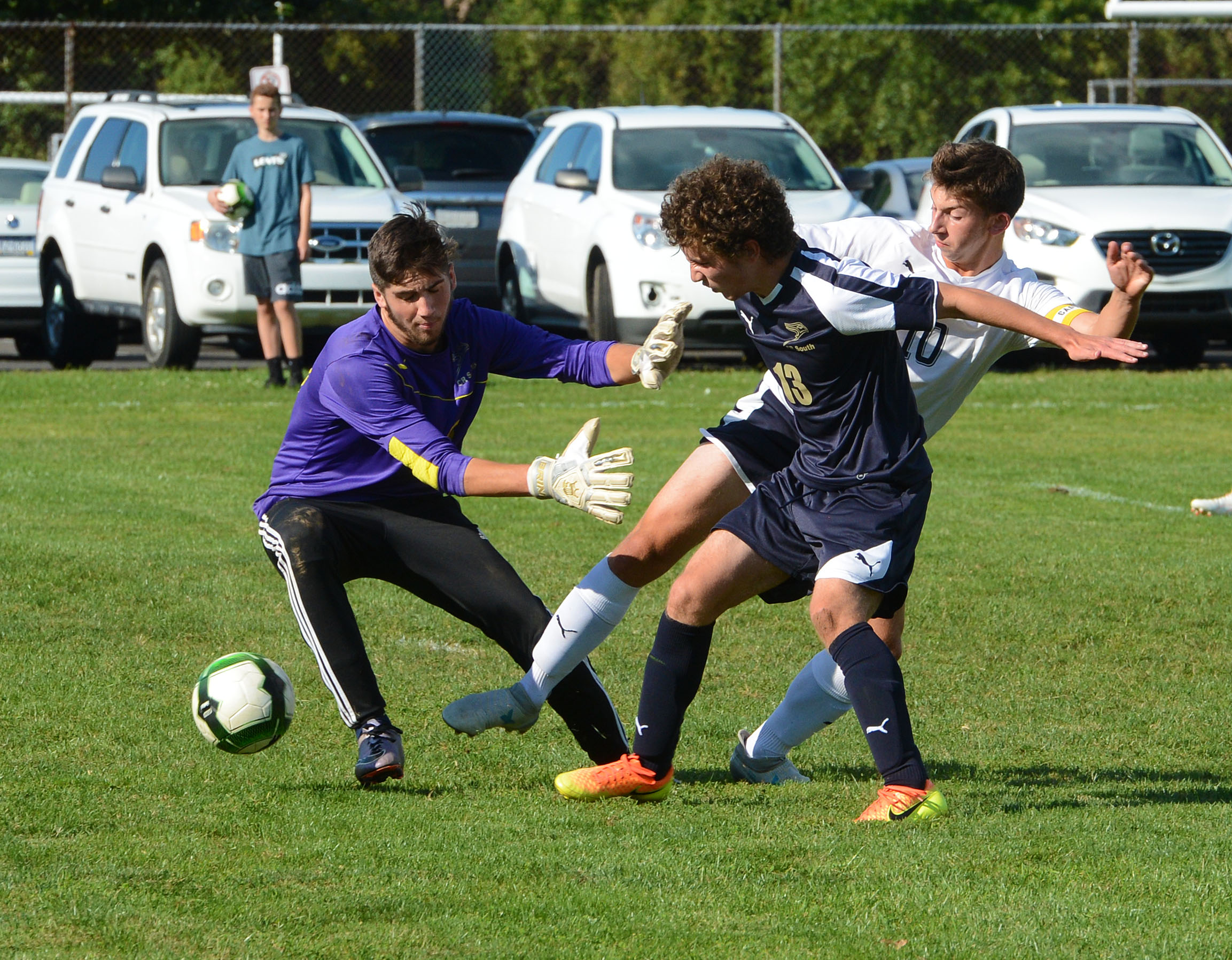 NEWTOWN – The Council Rock North boys soccer team was deadlocked in a scoreless deadlock on its home field with visiting Neshaminy Tuesday afternoon (Sept. 19) when senior Ryan Pave was hit with a red car. It meant the Indians had to play a man down the rest of the game.

Somehow, the Rock managed to pull through with a shutout – its third clean sheet of the season facing a Suburban One National League (SONL) foe.

“Neshaminy is a team that always plays with a lot of spirit and a lot of heart,” said CR North head coach Joe Stackhouse. “Today, I guess we had just a little bit bigger heart.”

Offensively, senior midfielder Justin Scharf came through with the game’s only goal 10 minutes into the second half, helping the Indians remain unbeaten in the SONL.

“This game was a gut-check. We knew at halftime, we were lucky to get out of the (first) half without conceding a goal with 10 men,” added Scharf, whose team was also playing with four men out of the lineup due to sickness or injury.

“We knew this was a checkpoint in our season and we looked adversity in the face and we knew we had to win. We want to stay undefeated in conference play; that’s our goal.”

Indians senior goalkeeper Ed Mancinelli made the lone goal count with his third shutout of the season. On offense, Scharf got his left foot onto a cross that came in from classmate Jon Pugh for the game-winner.

“We executed our game plan – get the ball out fast, attack from the flanks – that’s what we do best and it worked,” said Scharf.

With the win, CR North pushed its way to 5-2 overall, 5-0 in the SONL. The Indians have allowed just three goals this season against league foes after starting the season 0-2 against a pair of non-league opponents.

North started its season Sept. 1 with a double overtime loss to Philadelphia Catholic League (PCL) rival Archbishop Wood. The next day, the Indians lost 3-1 to Central League rival Harriton after giving up a pair of goals in the first five minutes.

After that, Stackhouse made some wholesale strategy changes. The team has not lost a game since.

“We made some tactical changes that allow us to play more on the flanks rather than moving the ball up through the middle which is what we did last year,” explained Scharf.

“When we started off, we had less guys in the middle. Now that we have the same amount of center-mids as most teams, we can distribute the ball out wide.

“In the beginning we were playing a 4-2-2; now we’re playing more of a 4-3-3 with Jon Pugh at defensive mid and Sean (Finneyfrock) and Conor (O’Donnell) roaming and distributing the ball to the others.

“It works out really well and all three of them have great chemistry playing together.”

The entire experience has turned into a growth movement, says Scharf.

“The failure we experienced in the beginning helped us to find where we are today and build,” he said. “And we’re only going to get better.”

A year after finishing fourth in the District 1 Class AAAA Tournament and earning a berth in the state quarterfinals, the Rock has taken the field without goalkeeper Anthony Caruso (New Jersey Tech) and leading scorer Nikita Illin. Backfielders Noah Ehlin – a significant contributor on set pieces with his big throw-ins from the corner – and Eric Levine also graduated.

“Those guys, collectively, were the engine in the heart of last year’s team,” said Stackhouse. “Those guys were more athletic and more physical.

“These guys have a better soccer mentality. We’re just doing it in a different way this year.”

Coming through in their first year starting on the varsity lineup are junior Zach Saifer and sophomore Jeremy Smithline. Together with senior Akash Shah, a returning player, the three are shoring up the back line along with junior T.J. Grube, who the coach says is the most improved players this season

In the win over Nesahminy, Scharf said the group united in pursuit of a common goal after getting a red card.

The Rock is currently ranked 10th in the District 1 Boys Soccer Power Rankings. Pennsbury is close behind at number 12.