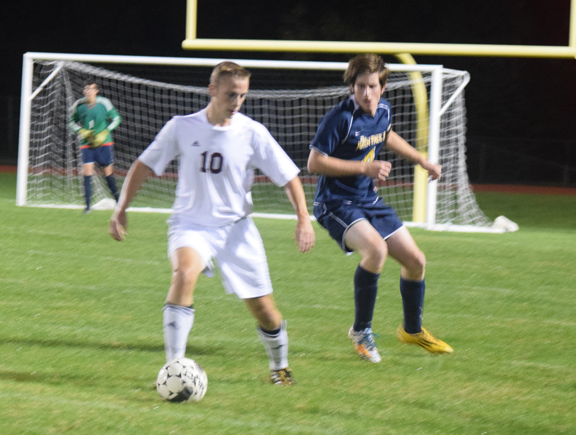 After graduating a huge senior class in the offseason, the Falcons feature just six this season. But a largely new lineup doesn’t mean the expectations and results need to change.

Pottsgrove kept that endeavor on course Wednesday night by downing upstart Pope John Paul II, 3-0, getting a goal and two assists from junior Will Kaiser and a goal and an assist from junior Nathan Yuchimiuk.

The Falcons, which also got a goal from David Dzordzorme, improved to 6-5 in the PAC-10 (7-7 overall) to move atop the Frontier Division, a spot they’ve owned for more than a few years.

Coming off Monday’s crucial 4-1 win over Phoenixville, Pottsgrove is finding its form.

“Everyday we’ve been getting better, especially defensively,” junior goalkeeper Liam Abdalla said. “We graduated all four of our defenders from last year so coming into this year it was about building as we went along. I think we’ve really come along and we’re at a good spot right now.”

Abdalla recorded four saves in the shutout, including a superb low stop of a header by PJP’s Colin Flanegin in the first half.

Abdalla and the defensive line of seniors Justin Toth, Nathan Miller, Noah Lear and junior Jared Kreiger managed to cool off the Golden Panthers (4-7, 4-8), which was riding high from a 7-4 win over Pottstown on Monday where it got a hat trick from Andrew Snyder and two goals from Erik Brock.

Pope John Paul II’s Andrew Snyder heads the ball away from danger on a long throw-in against Pottsgrove Wednesday. (Austin Hertzog – The Mercury)

Abdalla has welcomed the progress of his unit, though he didn’t mind what could have spelled more action.

“I was excited. More shots,” Abdalla joked, about entering the season with a new, inexperienced rearguard. “It was a little stressful at first, but I’ve been playing with a lot of them since U9s since many of them are in my grade so it’s honestly been really good.”

Kaiser was central to the Falcons’ output against PJP, playing a long through ball into space behind the defense for Yuchimiuk, who ran on to it and finished past PJP keeper Aaron Lemma, who made 12 saves, for a 1-0 lead in the 13th minute. Pottsgrove carried that lead into halftime despite better play from possession-oriented PJP late in the first half. But the Falcons’ superior speed of play was a difference maker throughout.

Kaiser got off the mark himself with a left-footed strike on the volley from the edge of the penalty area to make it 2-0 in the 49th minute.

“I needed one. It’s been a while,” Kaiser said.

He played distributor again, playing a pass centrally that Dzordzorme struck with the outside of his boot for the final tally with 12:45 left to play.

No doubt a setback for Pope John Paul II, which faces second-place Phoenixville (5-5 PAC-10) next Tuesday, but all is not lost.

“I’m really pleased to see the team playing significantly better than in the previous years, last year, the year before,” PJP coach Tom Csongradi said. “This loss probably ends our chances of making the PAC-10 playoffs, but we are very hopeful about districts and are working hard to reach districts.”

Reaching that stage isn’t foreign to Pottsgrove – they were in the final last season and faced Holy Ghost Prep – not even through a big roster turnaround.

“There was no doubt in my mind that we were going to be at the same spot and still have the same goals of getting in to districts and winning at districts. We have such a good program, even up from middle school, so we have those same expectations every year,” Abdalla said.