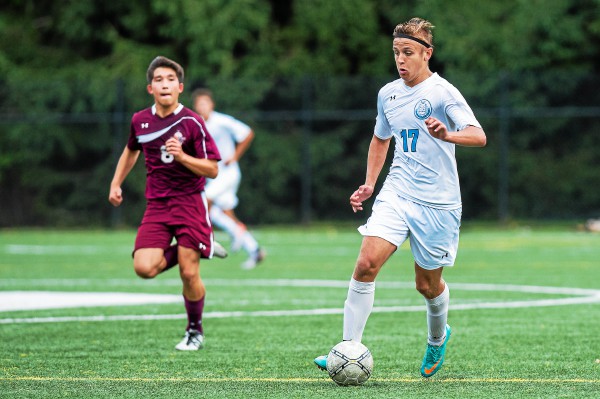 By Bruce Adams and Eddie Levin

The 2014 high school boys’ soccer season produced a number of impressive Main Line teams, and three of them – Shipley, Haverford School and Conestoga – ranked among the top 11 spots in the end-of-season Southeast Pennsylvania Soccer Coaches Poll.

Shipley (18-2-4), which had never been nationally ranked before this season, was ranked as high as No. 32 nationally by Top Drawer Soccer this fall, finishing at No. 46. The Gators won their second consecutive Friends’ Schools League championship with a 4-1 win over Westtown; then advanced to the quarterfinals of the Pennsylvania Independent Schools state tournament. The FSL title marked the third in five years for the Gators.

Conestoga (14-4-3) won the Central League championship, then advanced to the PIAA Class AAA District One quarterfinals before falling to top-seeded Unionville.

Devon Prep won the BiCentennial League’s President Division title and advanced to the PIAA District One Class A tournament.

Shane Bradley, Haverford School — Junior central defender, a first team All-InterAc pick, also was selected as the Fords’ Most Valuable Player and was named All-Delco Player of the Year.

Jimmy Tricolli, Haverford School — Junior center back, a third-year starter, was a key to the Fords registering 15 shutouts this season. Added six assists and a game-wining goal, and received second team All-Inter-Ac and All-Delco honors.

Conor Bradley, Haverford School – Junior defensive midfielder, the All-Delco Player of the Year and an all-state performer in 2013, was once again a first team All-Delco selection and recorded six goals and dished out four assists while representing the stabilizing presence in the Fords’ midfield.

Gian-Luca Hail, Lower Merion — Senior defender and captain, a first team All-Central League pick, was potent on both sides of the ball. Helped anchor an Aces’ defense that allowed only 14 goals in 20 games and posted 11 shutouts, while scoring a team-leading seven goals.

Mike Narzikul, Malvern Prep — Junior captain was first team All-Inter-Ac selection at midfielder, as well as the Friars’ Most Valuable Player. Was a potent offensive force for a Friars’ squad that posted a winning record, scoring 13 goals in 19 games.

Wyatt Page, Shipley — Junior midfielder was a versatile performer for the FSL champions, also contributing at wing midfield and center back. Considered a phenomenal passer who controlled the middle of the field and won crucial tackles all season to break up attacks. Dished out 13 assists, including six game-winning assists.

Josh Liss, Shipley — Junior left wing back anchored a defense that allowed only 13 goals in 24 games and posted 16 shutouts. Considered a very good 1v1 attacker and defender — many of the Gators’ goals came from the left side of the field because of his ability to win the 1v1 defensive battle and then transition to attack.

Ian Hamilton, Shipley — Senior central midfielder and captain, a two-time All-Friends Schools League selection, scored some crucial goals and had some crucial assists for the Gators, who won a lot of games this season with just seconds left on the clock. Can deliver a dead ball with great accuracy, and proved to deliver his best service when the Gators needed it most.

Konrad Bulanowski, Shipley — Senior striker was voted the Most Valuable Player of the Friends’ Schools League, and was named all-state and All-Southeast Pennsylvania. Scored 16 goals and dished out four assists, tallying a hat trick in the Friends Schools League championship final.

(Note: Archbishop Carroll and Haverford High did not submit ballots.)