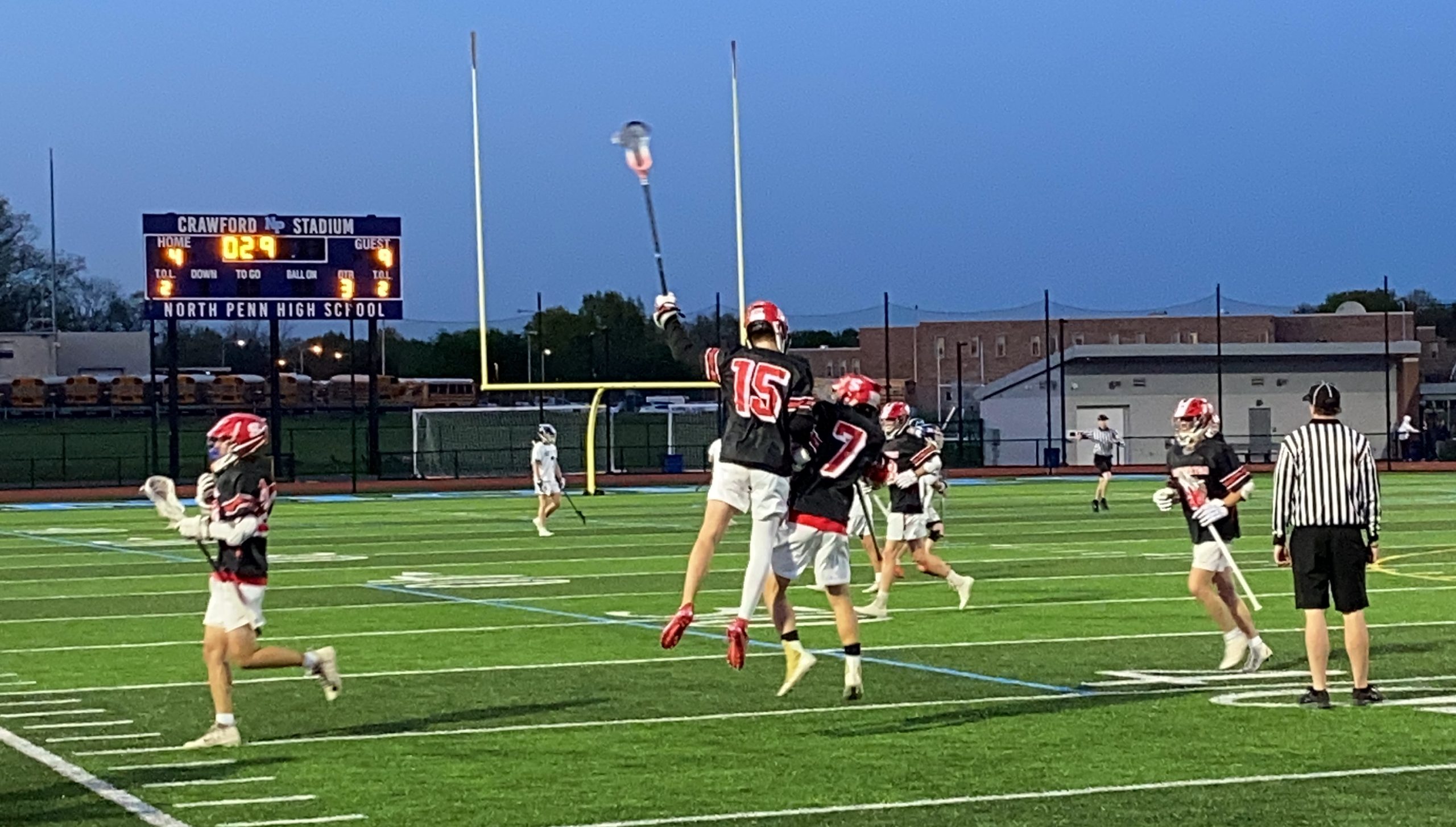 Souderton's Tanner Yerton (15) and Tyson Bui (7) celebrate after Bui's goal in the final seconds of the third quarter against North Penn on Monday, May 9, 2022. (Mike Cabrey/MediaNews Group)

TOWAMENCIN >> In the final seconds of the third quarter and well behind the midfield line, the only option for Souderton’s Tyson Bui was to toss it far and see what happens.

“I saw the clock ticking down, I was like I don’t want to give up a goal so might as well heave it,” Bui said. “You know, give it a chance. Doesn’t always got to look pretty.”

Bui’s long-range effort took a bounce and aided by miscommunication between North Penn’s goalkeeper and a defender, skipped into the back of the net with just 2.9 seconds remaining, putting the visiting Indians up 9-4 in the SOL National Conference boys lacrosse matchup.

“I’ve been playing since like first grade, I’ve never seen that happen before,” said Souderton’s John Martin Vince of Bui’s goal. “So that was awesome.”

BOYS #LACROSSE: Souderton’s Tyson Bui shoots a ball from well beyond midfield that skips into the net for a goal with 2.9 seconds left 3Q for a 9-4 lead vs. North Penn. pic.twitter.com/LtRjrimWAl

Souderton capped a solid second half by scoring the only two goals of the fourth – the last from Bui – to pull away and top the Knights 11-4 Monday night at Crawford Stadium.

Bui and Vince both finished with four goals – Vince tallying three in the first half, Bui scoring three after the break – as the Indians (12-3, 7-2 conference) rebounded from having a seven-game win streak snapped last Saturday as they fell 13-10 to Pennsbury, a loss that put a dent in Big Red’s hopes for a SOL National title.

Central Bucks East ended any chance Monday as it clinched the outright conference crown with a 10-5 victory over Council Rock South to stand 9-0 with one National game left.

“Our goal coming into this year was win the league and that’s kind of not looking like it’s not going to happen now and that loss kind of solidified that,” Bui said. “But we knew that it doesn’t really matter if you win the league you got to make some noise in the districts and states so we knew we had to bounce back and not try to lose two in a row.” North Penn’s Caleb Moister (17) battles with Souderton’s Emerson Goering (3) for a loose ball during their game on Monday, May 9, 2022. (Mike Cabrey/MediaNews Group)

Souderton and North Penn ended the first quarter even at a goal apiece before the Indians began to control possession in the second quarter and scored the period’s first three goals – two from Vince – to grab a 4-1 advantage.

“I honestly think just us getting it down and we were able to get the ball in the net once, it helped build momentum up for us,” Vince said. “And it really just helped us get going.”

Billy Homony’s goal with 18.3 seconds left had the Knights down 4-2 at halftime. North Penn (8-8, 5-4) was within two again at 5-3 when Jake Dolan scored off a Lars Homan assist at 10:18 in the third but the Knights could not get any closer as they had their two-game win streak stopped.

BOYS #LACROSSE: Souderton’s Tyson Bui shoots a ball from well beyond midfield that skips into the net for a goal with 2.9 seconds left 3Q for a 9-4 lead vs. North Penn. pic.twitter.com/LtRjrimWAl

Dolan had a goal and an assist while Homony, Caleb Moister and Connor Toussaint each added a goal for the Knights, who now sit 24th in the District 1-3A power rankings with 24 teams making the playoff field.

“The most important thing right now is we need to have all of our players in the entire program pulling in the same direction,” Smith said. “We need everyone at practice tomorrow, we have to have the best practice of the year tomorrow and just go into Pennsbury mentally prepared. And that’s all we can do.

“We have to worry about North Penn and not worry about what the other teams are doing. And as long as we take care of our own business we’ll put ourselves in a position to be competitive in a game.” Jamison McDivitt added two goals and three assists while Ty Quintois also had a goal for Souderton, which is 12th in the 1-3A rankings. The Indians have two more regular-season games, both at home – Neshaminy 6:30 p.m. Wednesday then faces Lansdale Catholic 7 p.m. Friday.

“We got a big two games coming up this week,” Vince said. “We just got to really stay focused, stay locked in, get two Ws this week and just see where we’re seeded and just get locked in for playoffs.”

Vince struck for his fourth goal 42 seconds into the third quarter for a 5-2 Indians advantage. From behind the net Homan found Dolan in front at 10:18 to have the Knights down 5-3. But McDivitt scored off a Vince assist at 5:38 then just 36 seconds later McDivitt connected with Quintois to push the lead to four.

“We weren’t really moving the ball that great in the first half, we had the looks but that’s a great goalie (Matt Kuhn) on the other side,” Bui said. “So once they started falling we got the energy up and we just kept pushing it from there.”

Dolan found Moister at the left post for a tally at 3:39 only for Bui to collect the third’s final two goals – charging in to bounce a shot in at 2:04 then making it 9-4 with his last-second heave.

“I’m kind of just thankful,” Bui said. “You just got to give it a chance sometimes.”

The Indians went up 10-4 as Shawn Martin won the opening faceoff of the fourth then found McDivitt for a goal eight seconds into the quarter. Bui struck for his fourth of the night off a McDivitt assist at 9:58.

North Penn had its only lead at 1-0 after Toussaint found the back of the net at 4:19 in the first quarter. Vince tied the game with 31.7 seconds left then put Souderton up 2-1 in the second quarter with a goal at 9:32.

“They were sitting back in the zone so we kind of had to assess it,” Vince said. “But then I just knew that if they wanted to play a shortie on me at X then I was just going to take my matchup every time and I was confident that I could take him every time and put it in the back of the net.”