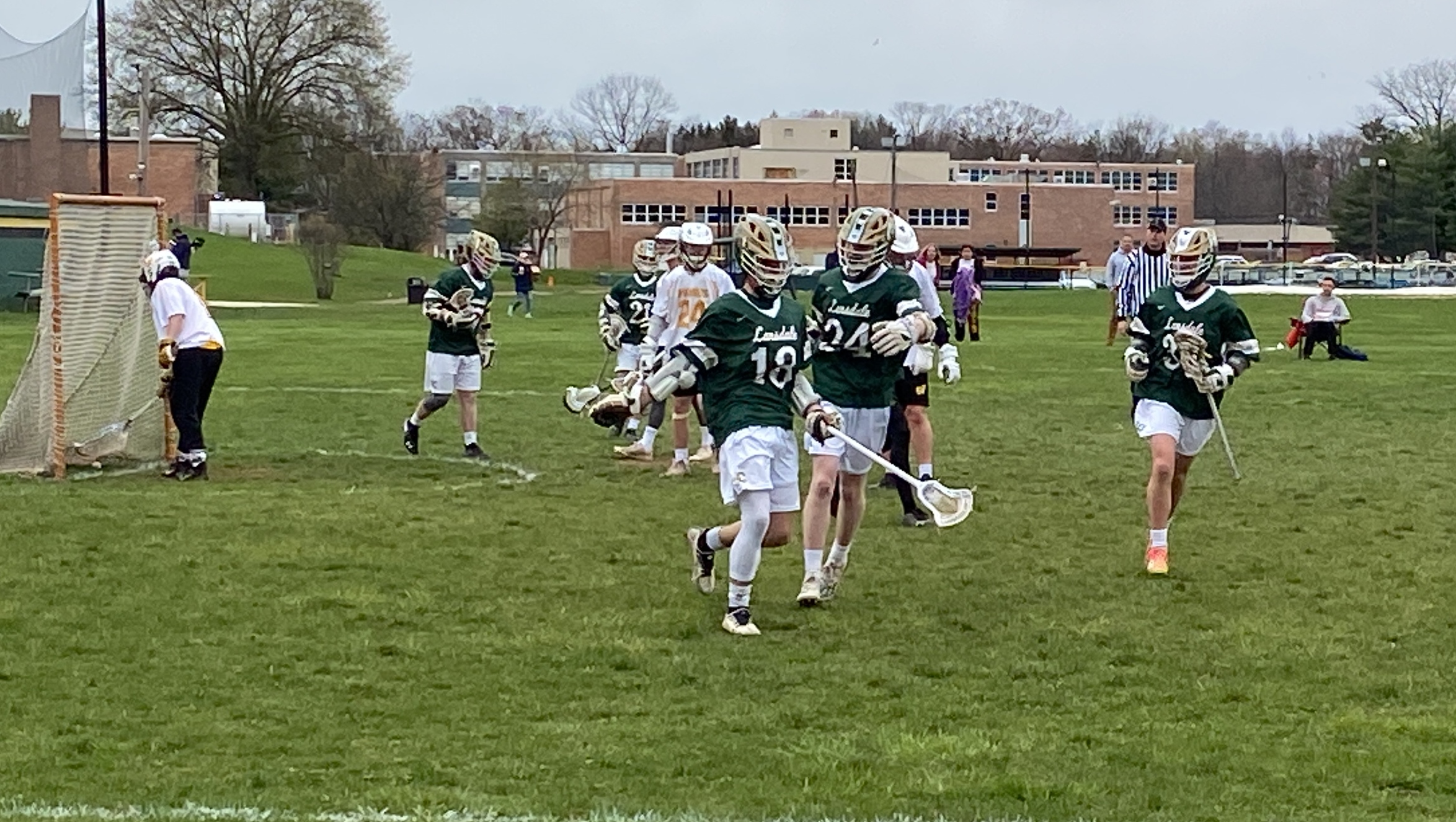 “It was definitely a big game for me cause I live right down the road,” the Lansdale Catholic boys lacrosse senior said.

Kleinert was ready for the Philadelphia Catholic League matchup and so were the rest of the Crusaders. LC scored the first seven goals and rolled from there, staying undefeated with a 17-5 victory over the Vikings.

“It’s always good to get the win but like I said, winning against a team that’s from your hometown does mean a little bit more since these guys never really looked at me as a lacrosse player,” said Kleinert, who attended William Tennent before transferring to LC as a junior. “Yeah, it did mean a little bit more. Maybe rub some dirt in the wound a little bit.”

Kleinert, an Ohio Wesleyan commit, finished with four goals while Connor Mann had a game-high five goals – four of Mann’s coming in the first half as the Crusaders (6-0, 4-0 PCL) built an 11-3 lead at the break then pulled away further by scoring all five of the third quarter’s goals.

“I thought that they came out fired up, ready to go,” Lansdale Catholic coach Mark Princehorn said. “I mean this is a rivalry games, these kids all know each other, a lot of them went to grade school together and have played youth together so it didn’t take too much to get them motivated but the execution right off the bat was what I most pleased of, especially because of being off for four days.”

Patch Flannery scored three goals and handed out three assists on a cool April day that had a steady rain falling in the later part of the contest. Pat McKeever and Pat Cooney both had two goals while LC goalkeeper Jack Kennedy made nine saves.

The Crusaders have now posted at least 12 goals in five of its six games so far in 2022 and are averaging 14.5 goals per game.

“I think we were doing a pretty good job of finding our matchups and going at those matchups,” Princehorn said. “I think our offense has a tendency sometimes to play a little too fast and not maybe make the smart play. And today, especially in that early part of the game when we jumped out to that lead we were playing fast and smart.”

Both teams are back in action Wednesday for Catholic League contests at 3:45 p.m. Lansdale Catholic – which sits tied for first in the league with La Salle – visits Cardinal O’Hara while the Vikings host St. Joseph’s Prep.

“We got some big games coming up,” Princehorn said “It’s hard not to think about La Salle a week from Tuesday. It’s not overlooking O’Hara at all. Jim DiBattista’s doing a great job down there but we all kind of know what’s on the horizon and La Salle is a huge game, really are going to see where we stand.

And then the month of May in general for us, we’ve got Devon Prep and St. Joe’s Prep, Bishop Shanahan, Marple Newtown on April 30, Souderton of course. Big games – big games coming up, so we’re excited. I mean with all the rescheduling this is only our sixth game so we have a lot of lacrosse to play. We’re excited and our biggest goal always is to play our best in May and with the teams we play in May we need to play our best.”

Mann found the back of the net just 52 seconds into the first quarter while Flannery’s goal made it 2-0 at 10:11. Mann collected a bouncing, off-target shot to the left of the net then scored his second at 8:37. Kleinert struck from the right side off a Flannery assist to put the Crusaders up four at 7:43.

“He always gets fired up when we play Wood,” said Princehorn of Kleinert. “And for him, he’s such a great player, such a hard worker and you’re on a line with Connor Mann and Pat McKeever, there’s only one ball. And Mikey does an amazing job facilitating the offense.”

Flannery found Cooney in the middle of the defense for a goal at 6:32. Mann tallied his third at 2:56 while a Cooney goal 45 seconds later had the Crusaders leading 7-0.

Wood finally broke through when Roman Filippo found the back of the net with 26.2 seconds left in the opening quarter.

“We were moving the ball a lot more than we usually do,” Kleinert said. “We weren’t really playing me ball, we were playing a lot of team ball which is something that we like to pride ourselves on instead of playing just single-handedly.”

“They weren’t really putting specific guys on but whenever one of our attackmen were able to find the shorty we were pretty much taking advantage,” Kleinert said. “So I just happened to get the shorty a lot.

A Foley’s strike with 55.8 seconds remaining put the margin at eight heading into the second half. Lansdale Catholic, however, responded quickly in the third. Flannery corralled a loose ball and connected with Mann for a goal at 10:48. McKeever scored on a long-range effort just 48 seconds later.

Flannery spun off a defender and bounced a shot in for a 14-3 lead at 8:43 while Kleinert registered his fourth of the afternoon at 7:59. Gavin Selchert capped the scoring in the third to put LC up 16-3.