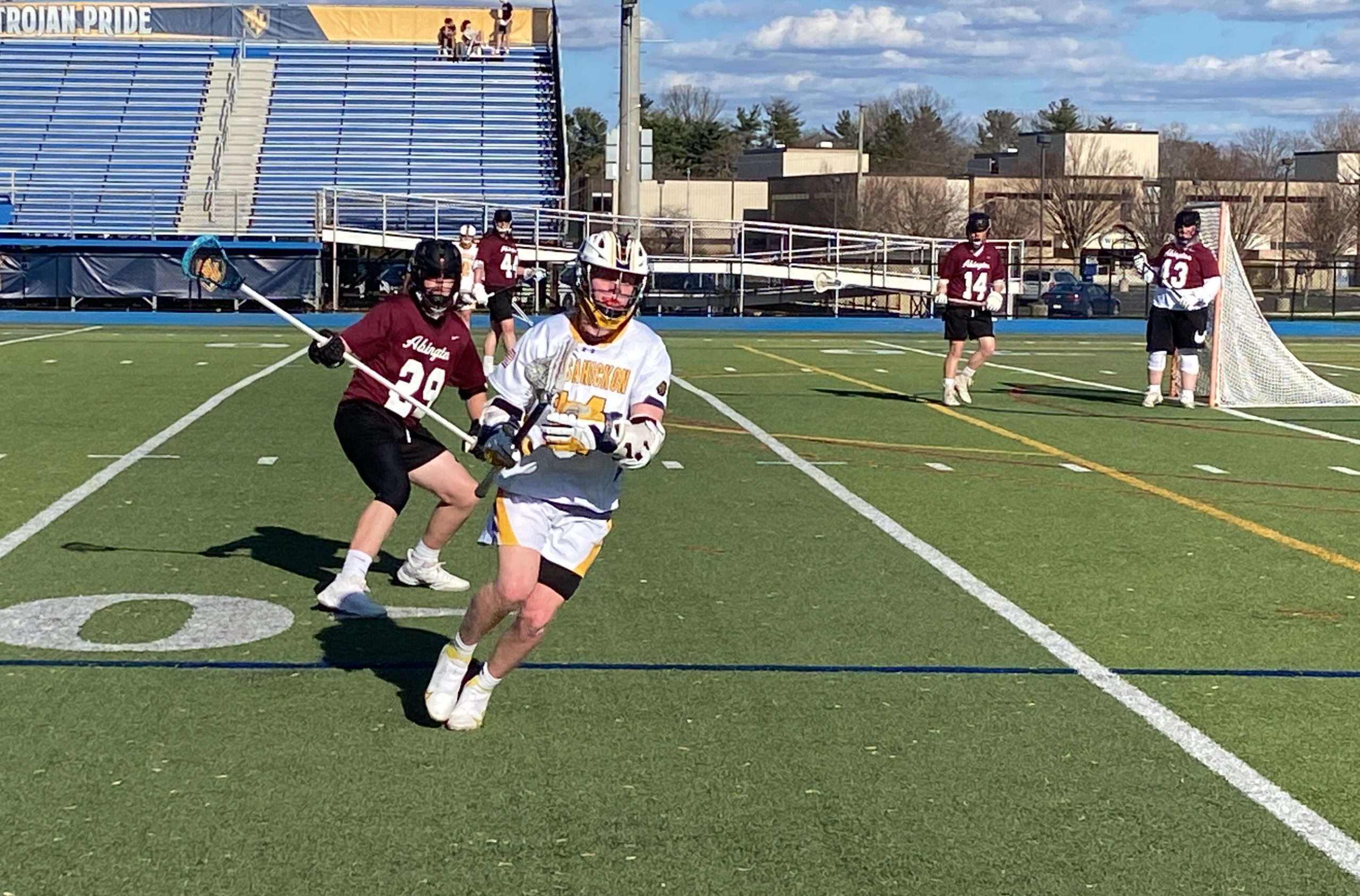 Wissahickon's Kyle Lehman with the ball during the Trojans' game against Abington on Tuesday, April 12, 2022. (Mike Cabrey/MediaNews Group)

LOWER GWYNEDD >> Kyle Lehman is still figuring out the transition to being the facilitator in the Wissahickon boys lacrosse team’s offense.

A season ago, that role was taken by Jackson Intrieri with Lehman primarily focused on just putting the ball in the net, something he did 65 times as the Trojans reached the PIAA-3A quarterfinals.

But with Intrieri now at Jacksonville University, it’s now Lehman’s job to get everyone involved in the attack.

“I’m kind of in Jackson’s spot now,” he said. “Last year I was more of receives Jackson’s passes and finishing. So last year I had a lot more goals than assists and then this year I’m looking forward to having more assists than goals like Jackson had last year.”

The junior Penn State commit had no problems playing distributor Tuesday as Wissahickon opened Suburban One League American Conference play at home against Abington. After scoring the contest’s first goal, Lehman dished out five assists – three going to Sam Baker – as the Trojans cruised to a 14-2 victory.

“It’s different,” Lehman said. “All my life I’ve been trying to go dodge and go right to goal. But now this year it’s kind of harder cause when I dodge and break my guy the other teams kind of know how I am so they’re going to slide really early. If anything they’re sliding right as I get the ball to dodge so it’s different now, I can’t just dodge and go to goal, I got to dodge and look up and see where the slide’s coming, I need to read the defense which is a huge transition for me, it’s really hard.

“I’m still trying to learn how to do all that so when I dodge I kind of have to read the defense and then I got to find out where the open guy is.”

Nick Donofrio scored a game-high five goals and also collected an assist, Baker tallied four goals while Andrew Slackman added three goals and an assist for the Trojans (3-3, 1-0 conference), who have won three of their last four since starting the season with consecutive losses to Springfield-Delco and Downingtown East.

“The boys came ready to play today,” said Baker, an Ithaca College commit. “Coming off a tough week last week, wanted to bring it this week especially to start off league competition. So, thought we did well passing the ball, moving it, getting our shots when we were open.”

Tuesday was the first time the Trojans reached double-digit goals in 2022, Wiss striking twice in the first two minutes of the first quarter then getting the offense going again at the tail end of the period to lead 6-0.

Wissahickon extended the margin 10-0 at halftime and was up 14-0 in the fourth before the Galloping Ghosts (3-5, 1-1) got goals from Gavin Sweeney and Ben Markham.

The Trojans are back on the field Wednesday as they visit Central Bucks West for a 7 p.m. SOL nonconference game. Abington next plays 7 p.m. Tuesday as it hosts New Hope-Solebury in an SOL American matchup.

“We’re really trying to find a way to put this offense together, which it looks like we have been doing a good job today,” Baker said. “But our first couple of games we were still trying to figure things out. But it’s a long season, 3-3 not bad we’re looking to get a lot more wins.”

Lehman made it 1-0 by dodging to the middle and ripping in a shot at 10:35 in the first quarter. Donofrio doubled the lead 27 seconds later.

The score stayed that way until Lehman connected Baker on back-to-back goals, first at 3:36 then again at 1:37. Baker made it a hat trick as she drove down the middle and found the back of the net at 50 seconds.

Slackman scooped up a loose ball and scored just ahead of the buzzer to give the Trojans a 6-0 edge at the end of the first quarter.

“Andrew Slackman at attack has been great,” Baker said. “He’s stepped up huge, especially with Dean Wolfe out with an injury. And Nick Donofrio as well. I feel like all attackmen right now are just jelling.”

After Slackman came around the net for a goal at 7:17 in the second quarter, Lehman and Baker hooked up for the third time – Lehman working behind the net before finding Baker for an overhand shot he rifled in at 1:41.

“Sam’s always getting through the cracks and finding his way open so when I dodge it’s real easy to find him,” Lehman said. “He’s always in the right spot and he always tends to put the ball in the cage.”

Lehman again came from behind the goal and dished to Donofrio for a strike at 1:41. Donofrio scored again with just 22.5 seconds of a Gavin Myers assist for a 10-0 halftime lead.

Lehman posted his fifth assist as Jimmy Malott scored at 6:40 in the third. Donofrio’s tally off a Myers helper enacted the 12-goal running clock.