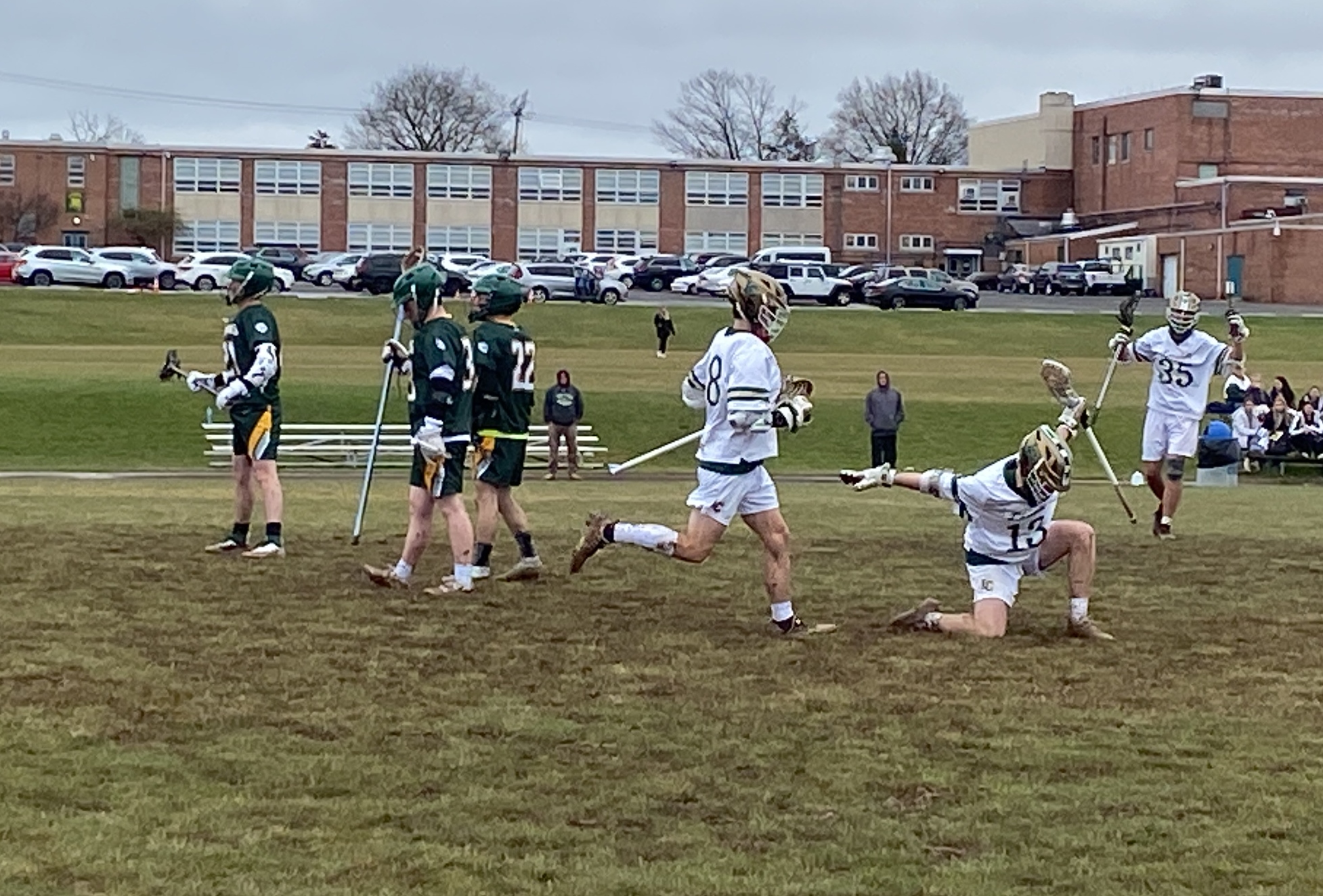 LANSDALE >> The field was a muddy mess but senior Connor Mann and the Lansdale Catholic boys lacrosse team embraced the conditions.

Finding your footing proved to be tricky in certain spots and clean jerseys were a near impossibility but Lansdale Catholic grabbed a hold of the game early, scoring the first 12 goals and stayed undefeated by cruising past the Friars 20-4.

“Our field’s taken some hits with some different things over the season and we’re planning on providing some good maintenance and getting it rolled soon,” LC coach Mark Princehorn said. “The main reason is we already had to move two games and there’s only so many days you can play while still appropriately abiding by the PIAA rules and not going seven days in a row. So with two games that we already had to reschedule that are big games for us we want to make sure we get this one in.” Mann, Colin Corbett and Pat McKeever all finished with four goals while Gavin Selchert scored twice for the Crusaders (4-0, 2-0 PCL), who used a balanced offense to race out to an 11-0 lead after the first quarter.

“It was just to play our game,” said Mann, who broke LC’s career goal mark in the win over Upper Dublin March 28. “Just short, choppy steps cause we knew we couldn’t take our big steps like we normally could with all the mud out there.”

Lansdale Catholic had eight different players register a goal in the opening quarter, Mann finding the back of the net three times in the period while Corbett struck twice.

“I’ve been very, very happy with how the scoring has kind of been dispersed through the year so far,” Princehorn said. “I would say with some of the experience and talent that we offensively sometimes in practice they learn some hard lessons about not playing selfish and playing in our system and playing team lacrosse and where they all want to get their points when it comes to game time they’re all pretty unselfish.”

BOYS #LACROSSE: @LCCrusaders works the ball around for a Connor Mann goal off a Pat McKeever assist 1Q vs. Bonner & Prendergast. pic.twitter.com/qc2JwkZkZJ

A Selchert tally gave LC a 12-0 lead at 9:03 in the second quarter before consecutive goals from Bonner & Prendergast’s Sean Donohue made it a 10-goal margin at halftime. The Crusaders, however, scored the first six goals after the break to pull away further.

“We went into the game thinking ‘Oh we’re not going to be able to see the ball, pick up the ball,’” Mann said. “But no it was a lot easier than what we expected for picking up the ball-wise.”

Mann, who has committed to Division II Belmont Abbey College in North Carolina, said it was apparent quickly Wednesday it was going to be a sloppy situation.

“As soon as we came out here for warmups, you could see the puddles,” he said.

Mikey Kleinert had a goal and two assists with Jake Lesher and Sean McMahon both finishing with a  goal and an assist. Tyler VanOsten, Patrick Flannery and Pat Cooney each tallied a goal while Ian Gramlich picked up an assist.

“The field we practice on which is at the way top part of our property by our junior parking lot is actually the worst field on campus so my guys practice on that every single day so this is a step up to that any day of the week,” Princehorn said. “And these kids are blue-collar kids that play a blue-collar brand of lacrosse and doesn’t matter what the playing surface is, they kind of go out and play so I told them not to do anything differently.”

LC goalkeeper Jack Kennedy had seven saves. Dan Curran led the Crusaders on faceoffs, going 11-of-15 from the X.

The Lansdale Catholic boys lacrosse team comes off the field after its 20-4 win over Bonner & Prendergast on Wednesday, April 6, 2022. (Mike Cabrey/MediaNews Group)

The mud did little to bog down the Crusaders’ attack. Corbett scored for a 3-0 LC lead at 9:38 in the first quarter with Mann striking eight seconds later off a Kleinert assist. Corbett added his second of the afternoon at 8:38 to make it 5-0.

“We were just playing our game, moving the ball like we always have been,” Mann said.

A VanOsten shot found the back of the net for a 9-0 advantage at 5:34 before Mann scored the opening quarter’s final two goals at 2:50 then at 32 seconds.

“It’s a very experienced group, guys that have great sticks that are all fundamentally sound,” Princehorn said. “And if we did say anything, we just wanted to keep the ball off the ground, keep in the air, play lacrosse not play this field hockey where we’re trying to get ground balls all over the place and the ball’s not staying in sticks and it’s staying off the ground. Keep it in the air, move it and they did that. And we had a good result offensively.”

With LC up 12-2 at halftime, Mann tallied his fourth at 11:09 in the third quarter with McKeever scoring the next three – his third a behind-the-back strike for a 16-2 lead. Consecutive Corbett goals made it 18-2 before Bonner’s Shane Mulholland snapped the 6-0 LC run.