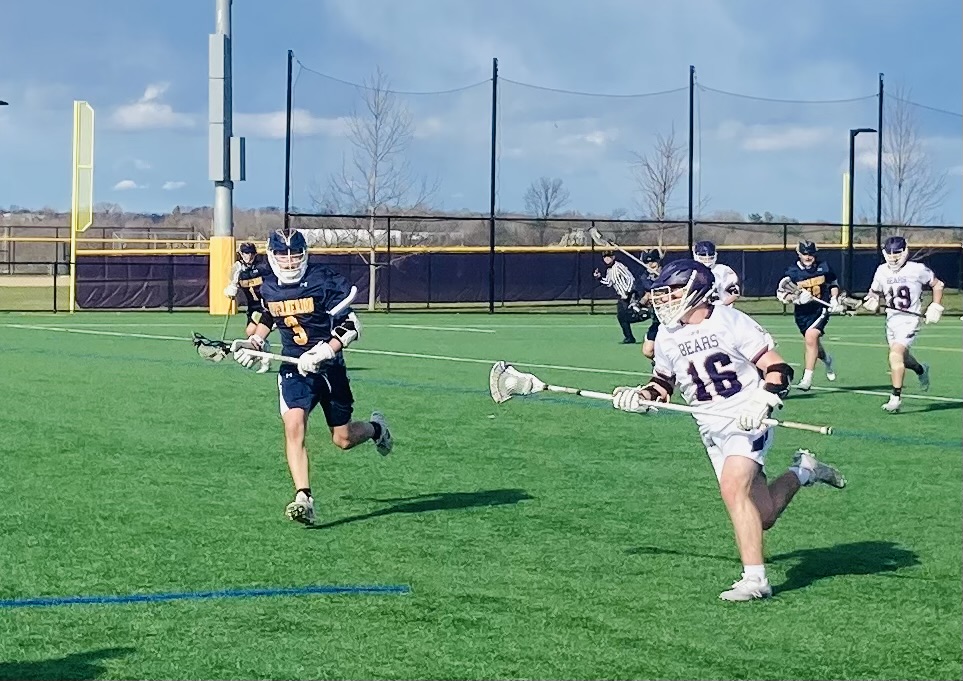 UPPER MORELAND >> Upper Merion is learning — and winning — on the fly, fine-tuning its engine while piling up wins nonetheless.

“We need to be able to come out of these non-conference games clicking, not making those mistakes and not falling apart and being able to close out games,” said coach Brady McCormick after Friday’s non-league clash with Upper Moreland.

“We’re always happy with a ‘W,'” he said, “but we had a couple stretches where we had really poor execution.”

The Vikings saw their commanding 8-2 lead shrink to 8-5 midway through the fourth quarter, but a clinching goal by Collin McCormcick helped put away a 9-6 win for Upper Merion, raising its record to a perfect 3-0 Friday. The Vikings played their best in the middle two quarters, pulling away from a 2-2 deadlock to build that 8-2 cushion.

“We went into the huddle, told everyone to get some energy, and come out strong,” said Casey Lamey, who poured in a game-high four goals and added a pair of assists. “The first quarter wasn’t really what we wanted, so in the second and third, we wanted to show them who we are.” Lamey was a big part of the offensive surge for the Vikings, scoring in several different ways, including a nifty, left-handed shot.

“I was feeling it a little bit after I hit that one,” he said with a smile. Upper Merion’s Nick Valente gathers in a pass during the game with Upper Moreland on Friday, April 1, 2022. Kev Hunter, MediaNews.

The Vikings were able to work the ball around and get that clinching goal from McCormick to widen the gap to 9-5, but as a whole, they wanted more out of the final 12 minutes.

“I didn’t like our performance in the fourth quarter,” Lamey said. “I thought that was our worst quarter. But we’ll come out tomorrow (at Archbishop Carroll) ready to get back at it.”

Said Lamey: “We have high expectations this year, so we’ll see what happens.” Upper Merion players watch from the sideline during the game with Upper Moreland on Friday, April 1, 2022. Kev Hunter, MediaNews.

“We graduated two meaningful guys from last year,”  coach Brady McCormick said, “but the rest of our core is back and grown up.” The Bears saw their attack come to life thanks to the shooting touch of Joe Messina, Owen Dunleavy and Justin Drinkwater, who scored two goals each.

Upper Moreland came screaming back into the contest in the fourth, scoring three times to get within 8-5. After a busy, four-game week, Upper Moreland (3-2) has some time off before a big Wednesday night battle at rival Hatboro-Horsham.

“Our goal always is to play the way we did in the fourth quarter for 48 minutes plus,” Bears coach Corey Kelly said. “Unfortunately, we found that hot streak a little bit too late. We won the last 12 minutes but that’s not gonna get it done. I told the boys we have to be the first ones to strike.

“It’s a lot of little things – getting ground balls, turning that into possession which turns into goals. We’re looking to put a complete game together.”