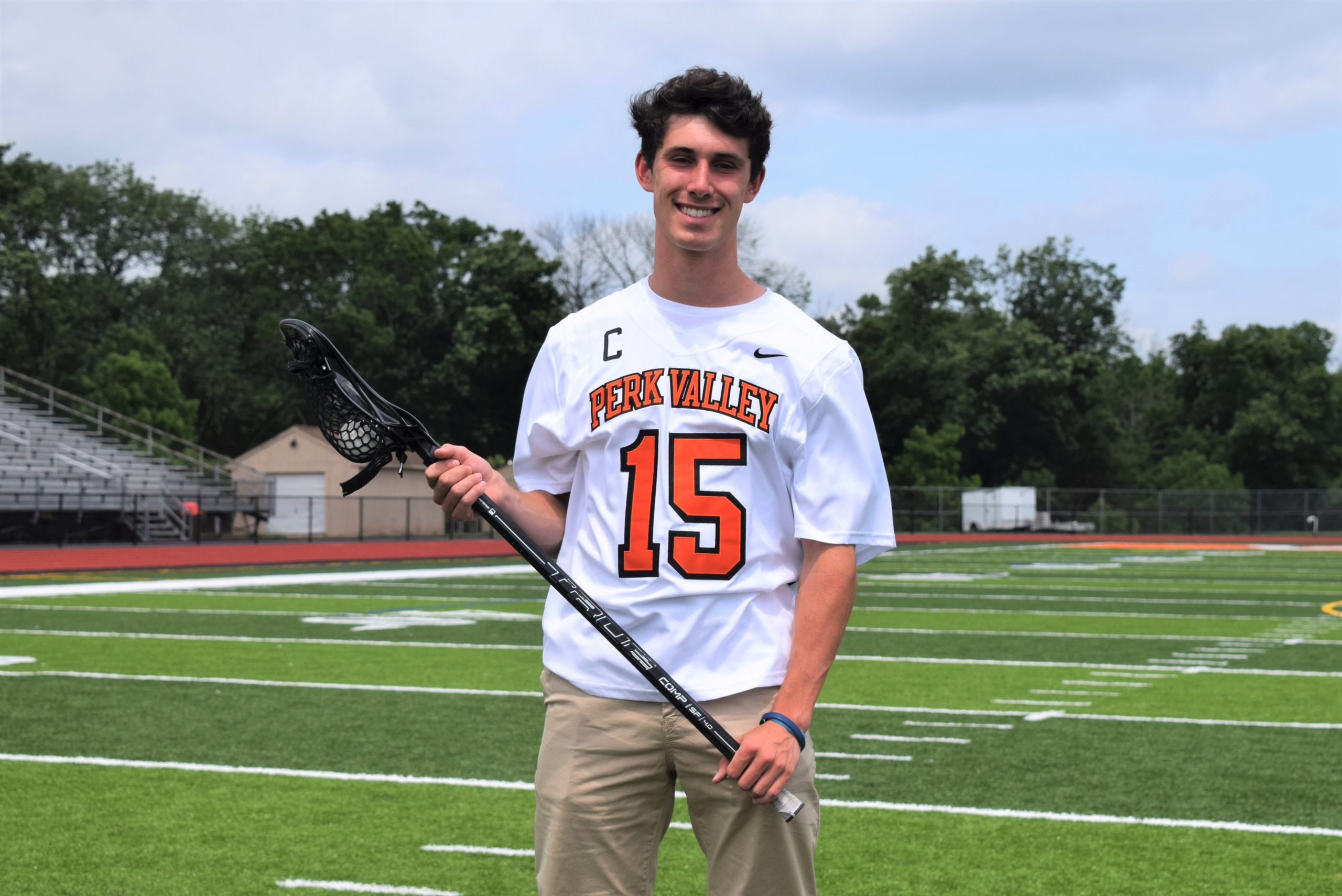 The loss of the 2020 spring sports season in Pennsylvania meant different things to different people.

To Jack Scaliti and the Perkiomen Valley boys’ lacrosse team, it meant a turning point.

Scaliti and the Vikings used the downtime to turn a self-admitted immature group of teenagers into a well-rounded, battle-tested team.

The rewards? For Perkiomen Valley, their first PAC lacrosse championship in their 15-year tenure in the league.

And for Jack Scaliti, the honor of 2021 Mercury All-Area Boys’ Lacrosse Player of the Year.

One of the team’s three captains, Scaliti led the Vikings in scoring with 28 goals and 27 assists and was the team’s engine room on offense.

“Jack was a leader for us throughout the entire offseason. The team isn’t as successful without his leadership,” said PV head coach Bryan Churchey. “He was also our main facilitator on offense, coordinating guys and setting guys up routinely throughout the season. When he is not in our offense just isn’t the team same, period. He is the catalyst that gets us started.”

Before the Vikings could break Spring-Ford’s nine-year stranglehold on the PAC title, they had to accomplish a much humbler goal – finding ways to work out and practice together. But in the spring and summer days of 2020 amid the COVID-19 pandemic, this was much easier said than done.

“Last May, Aidan Owens created a group chat with the seniors and some of the juniors and talked about getting together to do some 1-on-1s,” recalled Scaliti.

By the time the Vikings got together, there were enough players to work on not only 1-on-1s, but full 6-on-6 scrimmages. “That was the first time we had that feeling, like ‘this could be the year,’ said Scaliti. “We thought if we did that a couple times a week, we would be in pretty good shape.”

Of course, with classes virtual and the school closed, the players had plenty of ‘alone time’ that could have otherwise been spent in team building.

“In a way, that made [the 2021 season] more special,” said Scaliti. “We persevered through being unable to do anything with Coach Churchey, not doing school-related stuff – we really had to do it on our own. We took younger guys under our wings who hadn’t played varsity lacrosse before, we got gym memberships, went to Manderach Park. That’s where the real leadership and accountability came in.”

One particular trip to Manderach has the potential to become a legendary tale in the annals of Perkiomen Valley lacrosse. By this time, it was winter, with the scheduled start of spring season only weeks away. But you wouldn’t have known it by that day’s weather report. “We were back in school, and I think it was about 10 degrees outside that day,” remembered Scaliti. “But we hadn’t had a practice in so long.”

“We talked about going to 422 SportsPlex, paying $5 each and getting some work in – but they were closed. So someone suggested going to Manderach, but everyone thought it was too cold out.”

It was at that moment that Scaliti remembered the lessons of his freshman year – another highly successful Perkiomen Valley team that qualified for PIAA states. “Remy Sell, Brian Fehr, guys like that laid down the hammer, helped us understand what to do. It was eye-opening to see how seriously high school sports are taken.”

So a little cold weather wasn’t going to stop the Vikings from practicing. “I told everyone ‘throw on sweatpants, a sweatshirt, whatever you have to do.’ I remember wearing sweats, a windbreaker, plus medical gloves under my lacrosse gloves.

“It was really cold. The ground was frozen solid, it was windy – but we did it. We got out and practiced. I think that’s representative of who we became as a team and as a senior class – who cares what other people think? Go do what needs to be done.”

And on April 9, it started paying off.

The first lacrosse game on the new turf at Thomas J. Keenan Stadium was the first game of any kind for the Vikings in 22 months. But there was one familiar element – the opponent. Nine-time defending champion Spring-Ford has tormented the Vikings through the class of 2021’s high school careers, toppling them in consecutive PAC title games in 2018 and 2019 and eliminating PV from Districts in 2019.

It would all come to an end on that fateful Friday night when junior Dane Hagen’s second goal of the game gave PV an 8-7 lead with under a minute to play, and the Vikings’ defense held Spring-Ford at bay the rest of the way.

“We worked so hard for this – no one but us knows how hard we work for this,” said an emotional Scaliti after the game. “It feels so good.”

“I think I get that emotion from my mom,” he said weeks later. “But I don’t hide it. I was so happy – I couldn’t stop giving hugs to my teammates.”

Two weeks later, Scaliti was overcome yet again by emotion after his own overtime goal to topple upstart Methacton, 7-6, a win that all but clinched the first PAC title in school history. “On that play, I had a teammate open on the back side, but I went through the check toward the net,” he recalled. “But then I started falling to the ground – I guess it was all the momentum – and I just shot it over [the goalie’s] shoulder.”

“And I just ran for dear life.”

Scaliti made it clear to about the 30-yard-line on the Vikings’ side of the field before being surrounded by his teammates – just as he had been since the cancellation of the 2020 season almost one year ago to the day.

“During quarantine, that’s what you dream of – making a game-winning shot. But for our team, that [winning the league title] had never happened before,” said Scaliti.

“I had no idea we’d end up like this. We were so immature, I’m not going to lie. But now, we get our work done when we have to. Off the field we’re still playful, having fun but we know when to get down to business now.”

The Vikings took care of business all season, accumulating a 14-2 record en route to the No. 3 seed in the District 1 playoffs. They would fall one heartbreaking win short of PIAA states, dropping consecutive decisions to eventual District champion Springfield (Delco) and state quarterfinalists Wissahickon.

But the team’s initial goal – the one that needed to be attained before anything else would matter – had been reached. And it was accomplished by a group that many would’ve seen as unlikely to break the streak – before their lost season and turning point.

“This ending [to my high school career] was so special to me,” said Scaliti. “Getting to play on the new turf, winning the PAC championship with all my friends who I’ve grown up with my whole life. It’s stuff you think about during the offseason – beating Spring-Ford, winning the championship. You’re going to remember these things forever.“