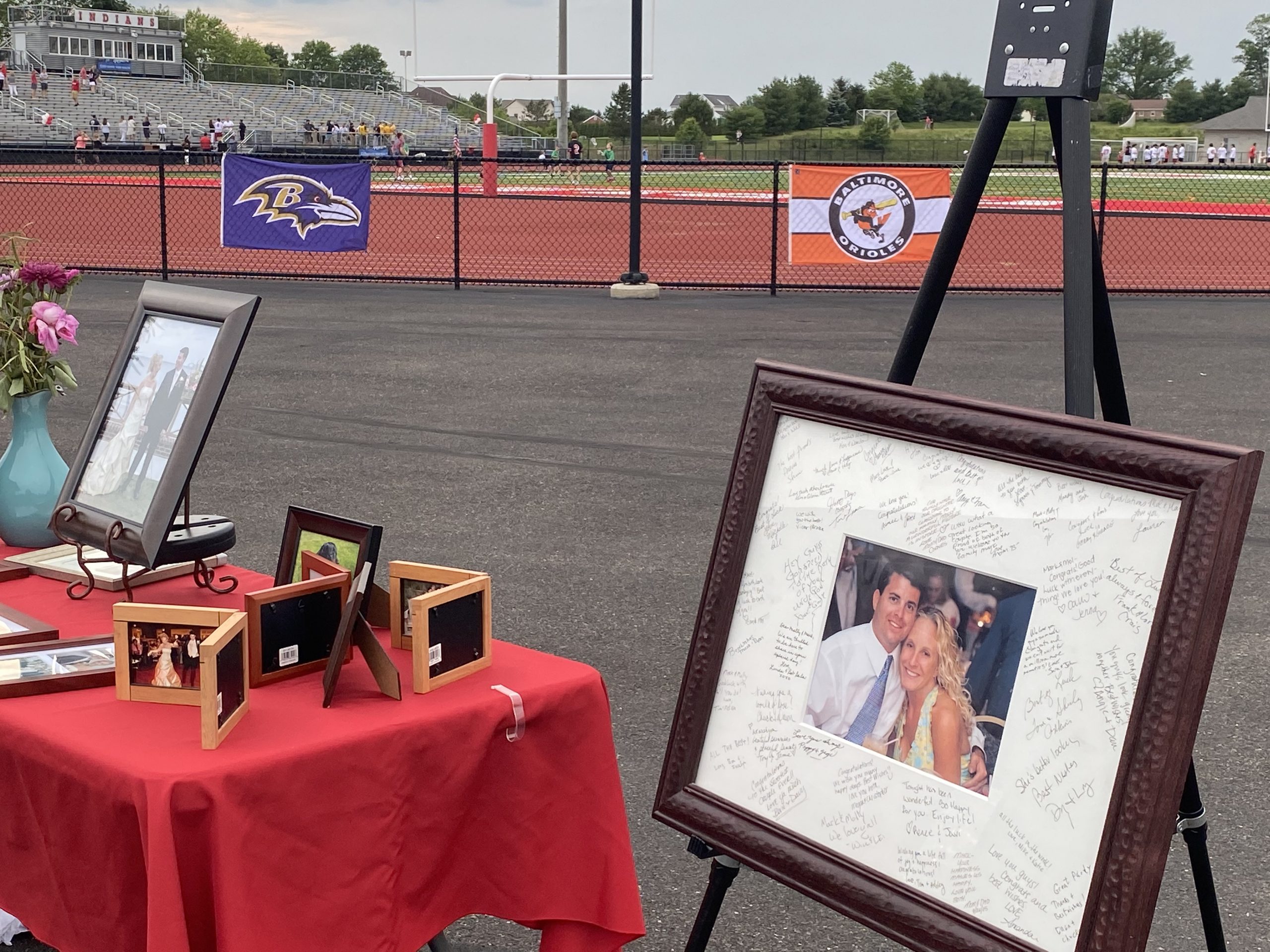 Photos for Souderton boys lacrosse coach Mark Cornes, who passed away at age 46 on Saturday, May 22, 2021, are displayed at a celebration of life ceremony at Souderton on Wednesday, June 2, 2021. (Mike Cabrey/MediaNews Group)

FRANCONIA >> For Souderton senior Manny Puente, a field filled with lacrosse players of all ages was one of the best ways to honor and remember Mark Cornes.

“Everybody’s out here, just having fun, having some laughs,” Puente said. “Everybody’s hurting in their own way but we want to make sure we’re still happy for who he was and be happy for the life he lived and what he brought to all of us. And I think it really shows here with everybody shooting around, everyone’s got smiles on their faces even though it’s a terrible reason why we’re here.”

Cornes, the Indians boys lacrosse coach, died unexpectedly on Saturday, May 22 at the age of 46. Wednesday at Souderton Area High School’s stadium, family, friends and several lacrosse communities came together for a celebration of his life, which had high school and youth-level players taking to the turf before and after the ceremony.

“Thankfully, (Mark’s wife) Molly Cornes thought of this idea, I think it’s a beautiful way to celebrate his life which is exactly what she wanted,” said Souderton junior Jamison McDivitt, who put together a video of the Indians boys team sharing their memories of Cornes. “He wouldn’t want it to be suit-and-tie, blacked-out funeral in a church and have everybody sad. He always wants us to enjoy each other, enjoy the sport of lacrosse and there’s no better way to do that what we’re doing right here today.”

Cornes is survived by his wife Molly – together for 21 years, meeting while both played lacrosse at UMBC, and married for 15 years – daughter Hannah, age 13, and son Logan, age 11.

A gofundme (https://www.gofundme.com/f/the-cornes-family) in support of the family has already exceeded its $25,000 goal while contributions to a memorial fund set up for Cornes’ children can be sent to TD Bank, 325 Main Street, Harleysville, PA 19438.

“I actually lost my father in 2020 but I remember he was always there for me as almost like a father figure so I would own him more than I would ever give to him,” Puente said. “And I’ll always remember him as just a huge person in my life, not only just on the lacrosse team, as a friend and he was family almost to me so I have a lot of appreciation for him as a person.”

Mark’s brother Brandon Cornes, a Commander in the United States Navy, was unable to attend Wednesday due to naval commitments but still shared a tribute, read by Brandon’s wife Crystin at the ceremony.

“I wanted so badly to emulate his fierce competitiveness, athletic ability and raw passion,” said Brandon of his brother. “He was never flashy or cute just a hard-nosed warrior with the heart of a lion. My internal struggles aside, I was so fortunate to have an older brother like him to look up to and endeavor to be like. He had no idea how much his successes fueled my desire to someday experience the same. He was the perfect role model for me and without him showing me the way I wouldn’t be where I am today.”

In high school, Cornes – who worked for OpenSource Technologies in Lansdale –  was a three-year starter for both the lacrosse and football teams at Gilman School in Baltimore, Maryland. His senior year, he helped the Greyhounds boys lacrosse team win the MIAA Conference title and was named the 1994 Baltimore Sun Boys Lacrosse Player of the Year.

He continued his lacrosse career at the University of Delaware before transferring to UMBC and was a member of the Retrievers’ first two teams that qualified for the NCAA Division I tournament. In his two years at UMBC, Cornes had 13 goals, eight assists and 50 ground balls.

Cornes moved from Baltimore to the Philadelphia area and in August 2017 became involved with the Souderton Area Boys Lacrosse Association (SABLA) and worked to better the region’s standards in the sport at the youth level.

“I do not believe Mark viewed lacrosse as a hobby or a job – lacrosse was a connection, a bond and a channel for developing young men,” said SABLA vice president Jeff Ferriola during the ceremony. “We coached in several, intense games together, he’s coached in highly-competitive travel and high school games. Wins and losses never seemed to be his focus, he used wins to demonstrate that hard work and team play were the right way. Losses were an opportunity to teach and console.

“Many have experienced the serious and uber-passionate side of Mark. I admit to misinterpreting his passion early on but I was thankful for realizing his burning fire was his passion for doing the best for our kids through the game of lacrosse.”

Cornes also coached Olde English, MESA Red and Dukes club teams and in 2019 became the junior varsity coach at Souderton High School before taking over as varsity coach in 2020.

“We were blessed to have Mark join our staff three years ago as our JV boys lacrosse coach and I’ll never forget after three games he scheduled a meeting with me – very similar it sounds like the SEPYLA meeting –  to discuss all the flaws of junior varsity lacrosse in Pennsylvania,” said Souderton athletic director Dennis Stanton during the ceremony. “He listed the scheduling, the officials, the lines were not correct on the field and we did not have enough equipment for our team. I quickly learned that Mark’s passion and enthusiasm for the sport was not just about the sport, it was about the overall experience for the student-athletes.”

The COVID-19 pandemic wiped out the 2020 high school season but Souderton’s return to the field this year under Cornes saw Big Red finish 12-7 overall and qualify for the District 1-3A tournament.

“Everybody wants to coach the best kids but you’d always find Mark would coach anybody,” North Penn boys lacrosse coach Rick Smith said. “If you were a brand-new player, if you were an experienced player and that’s a trait that made Mark such a great coach.

“The other thing I could say about Mark is he was very, very passionate about the game. And he let his feelings be known whether you want to agree with him or not, his interests were always with the players, it’s always in the players’ best interest and that’s what I’m going to remember Mark by.”

Souderton started its 2021 campaign 5-4 before putting together a strong second half, winning seven of its last nine regular-season games including a five-game win streak capped by back-to-back victories over North Penn and Lansdale Catholic. The Indians’ year ended with a district first-round road loss to Unionville but McDivitt remembers the trip home for what Cornes told the team on the bus.

“We’d taken that trip a million times throughout the season but instead of being mad on the bus ride home, that we had a very disappointing loss, a disappointing end to the season, he stood up, he’s like I want you to enjoy each other,” McDivitt said. “He’s like this is the last moment, just enjoy being present with each other in this moment. And just living the moment – live with each other and just carry that for the rest of your life, just always be present and just don’t take anything for granted.”