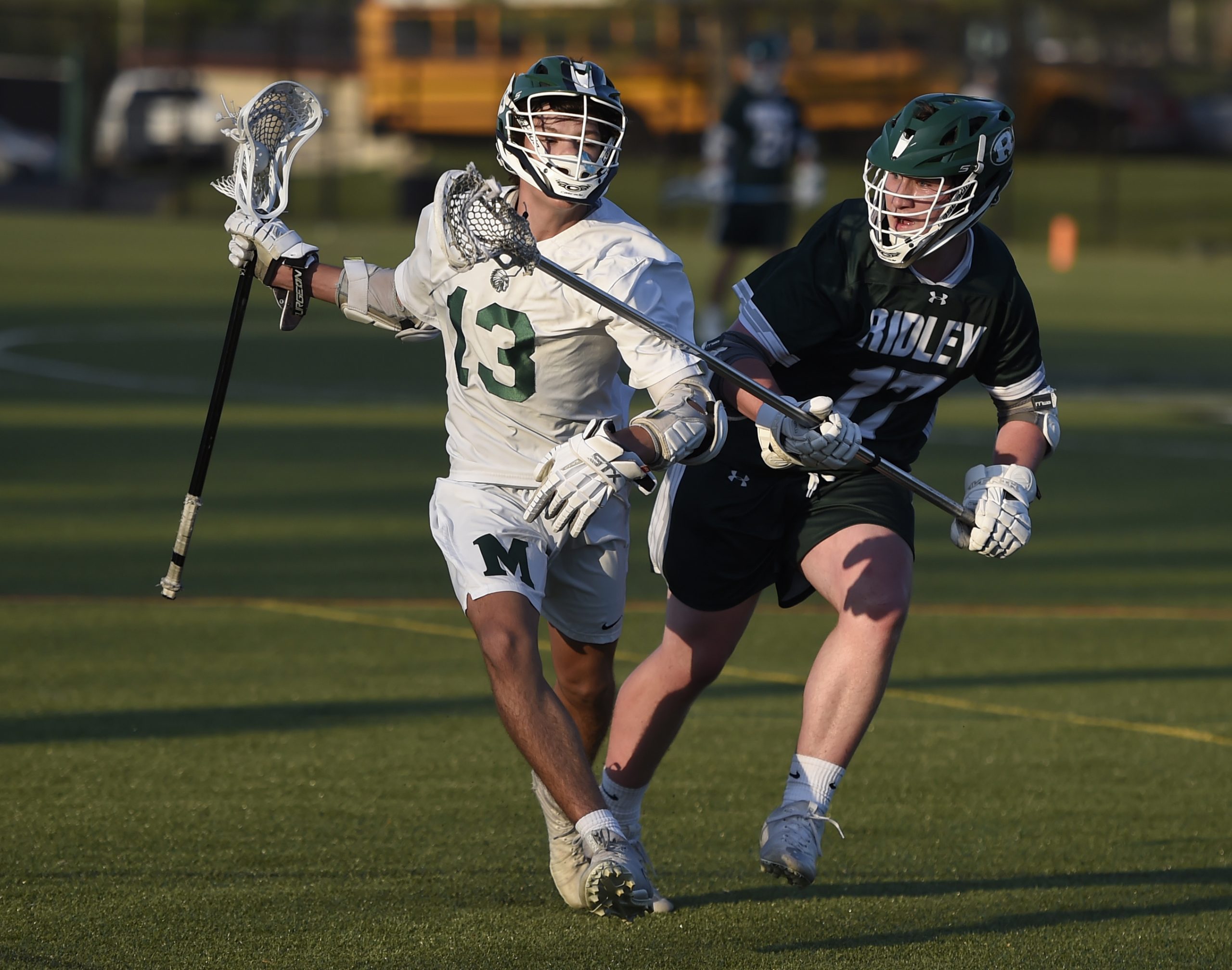 FAIRVIEW VILLAGE >> It was a sprint-race start for Ridley Tuesday evening.

And a marathon-race finish by Methacton in their District 1 Class AAA playoff opener.

Endurance at the defensive end was the key to the Warriors’ 11-2 victory. After being touched for a pair of goals in the first seven minutes of the game, Methacton put the clamps on its guests for the remaining 41 minutes to keep its postseason quite alive and heartily kicking.

“It was a combination of hard work and a good game plan,” Methacton head coach Matt Saxon noted. “We take pride in our execution.”

While the Warrior “D” kept the Green Raiders from adding to their early lead, the offense was quick to rebound from the slow start and dominate the action down a very long stretch. It came out of the first quarter with a 3-2 lead, padded it to 7-2 at the half, then added a lone third-quarter score before adding a hat trick in the fourth.

The result for ninth-seeded Methacton (13-2) is a second-round game at eighth seed Conestoga 4 p.m. Thursday.

“Getting a district win means so much for our team,” said Methacton senior Justin Sanelli, who led his team with five goals. For 24th-seeded Ridley (8-9), it’s a trip home for the year after a game that didn’t diminish its play the rest of the season.

“Our seniors did what we asked them,” Raider head coach Rory Friel said after a final post-game meeting with his players. “We had a hiatus from the playoffs, but they were the backbone and leadership. They leave the program in great shape.”

Ridley’s fast start hit one marker at 8:51 in the first, Jack Wills converting a straight-on shot. Little more than 3-1/2 minutes later, Owen Bosak hit paydirt on another straight-on shot after the Raiders controlled play at Methacton’s end of the field for all but 30 seconds of the game’s first 5:12.

That would be it for the Raiders until the final horn. They were stymied by Warrior goalkeeper Owen Avelar, who stopped 12 shots on the night, and a first-line defensive backfield consisting of starters Nik Leahan, Matson Leggin and Quinn Shields.

“Avelar has played that way all year,” Saxon said. “He kept us in the game.”

While the defense racked up its yeoman effort, the offense got a big boost from Sanelli. Methacton’s senior attack struck for five goals — four of them helped forge the Warriors’ first-half lead, the fifth put the home team in double figures with 3:19 left in the game.

Suffice it to say, Sanelli was elated at how the Methacton defense closed down Ridley after its early scoring burst.

“It was great team defense,” he said. “They communicated all over the place.”

Sanelli’s first two tallies came at the 4:22 and 2:32 marks of the first quarter. After Mike Merola scored with 1:45 left in the frame, and Gunnar Seaman opened the second by tallying at 9:29, Sanelli again went back-to-back at 8:45 and 3:31 — the second assisted by Carlo Defillipis.

“In the opening set, we ran by them,” he noted. “They were pressing us, so we were able to do that.” Defillipis then got in the scoring column with 11-1/2 seconds left in the half. Along with the 7-2 lead, the Warriors held a 7-4 edge in faceoffs won and Avelar had six saves.

“Our goalie was phenomenal,” Sanelli said. “I think he had a 70-plus percentage in saves.”

Matt Cole accounted for all the third-quarter scoring, his goal coming at the 5:19 mark. In the fourth, Jimmy Maro preceded Sanelli’s fifth goal with one at 10:49, and Merola produced his second inside the final minute.

“Coming off the slow start, we just took it quarter by quarter,” Saxon said. “The kids did a good job staying focused.”

For the night, Methacton had a 9-8 edge in faceoffs won. Avelar had three saves apiece in the third and fourth quarters after recording five in the second quarter.

“They did a nice job sucking us in,” Friel said of Methacton. “We got the looks we needed, but they played a great game. They executed more than we did.”

NOTES >> Alex Kowalczyk and Cam Light were credited with assists on Warrior tallies. Central Bucks East holds off rival Pennridge in final seconds for District 1-3A first round win
Unionville tops Souderton to set up second round clash with No. 1 Kennett