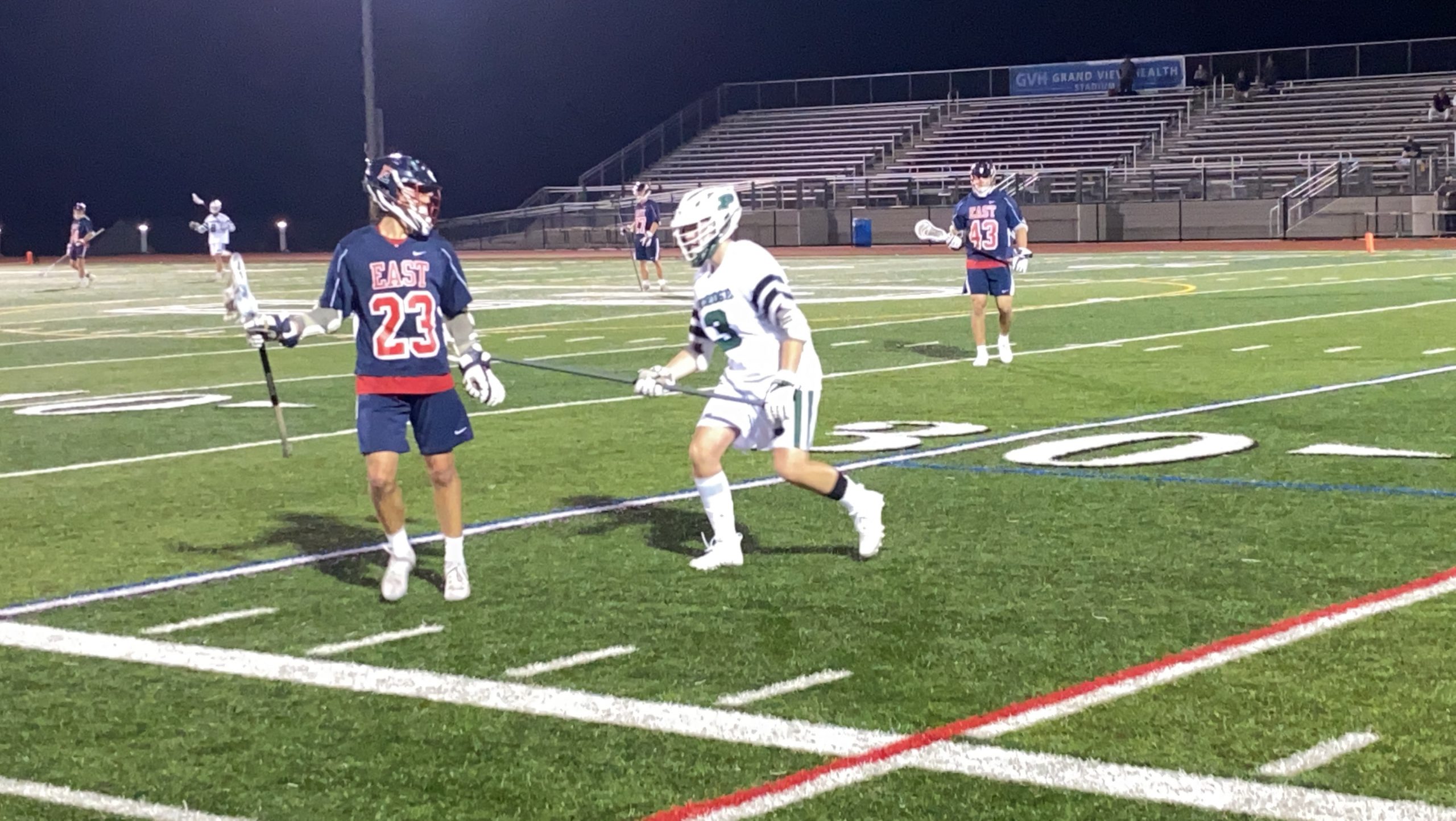 Central Bucks East's Nicholas Knepp (23) is defended by Pennridge's Nate McMahon (13) during their game on Tuesday, May 4, 2021. (Mike Cabrey/MediaNews Group)

The host Rams took a 7-5 lead into halftime and extended their advantage to three less than four minutes into the third quarter. But Pennridge could not find the back of the net the rest of the contest and the Patriots scored the final four goals – Luke Christmas providing the go-ahead score with 4:36 remaining as East rallied for a 9-8 win at Helman Field.

“That halftime huddle we really talked it up and we’re like we got to play better and we know we can play better,” Patriots senior defenseman Evan Bullotta said. “And then everyone stepped up and they did their jobs like we should of done in the first half.”

Pennridge freshman Ryan Carickhoff finished with a game-high four goals, registering a hat trick in the opening quarter then giving the Rams a 5-4 lead 13 seconds in the second quarter. Pennridge (7-7, 5-4 conference) stayed ahead of East until the fourth when Jonah Osborne came around the net and scored to pull the Patriots level 8-8 with 8:49 left in regulation.

“We started dominating the faceoffs, getting every ground ball,” said Bullotta, a North Carolina commit. “Getting it to the offense where they can score and hold the ball.”

East tallied the winner on the man advantage as Nicholas Knepp raced in and found Christmas in the middle for a low, twisting, behind-the back shot that went in for a 9-8 lead.

“I think we played a lot of defense and I think we kind of rushed it a little bit,” Pennridge coach JD Banks said. “We probably could of used a couple more possessions just move the ball around. And kind of settling cause what we were doing offensively was working. “I think we shot the ball really well today. That’s a tremendous defense and for us to be able to do what we did we’re very happy with what we were doing.”

The Patriots (9-3, 8-0) won the ensuing faceoff but lost possession after a crease violation. The Rams, however, gave it back as an off-target pass led to the ball going out of bounds off the home side.

East got into its attacking half and called timeout with 2:32 to go then held onto the ball until with 11.1 seconds were left. The Rams’ last chance ended with the Patriots forcing them out of bounds with 6.5 seconds and from there East ran out the clock.

“I thought we executed well early, we made a couple mistakes later in the day and at the end of the day, we give up a man-down goal,” Banks said. “Some interesting calls near the end of the game and that’s just what it is. But there’s no excuses we didn’t take care of the ball well enough for the entire game, I thought we made some mistakes in the clear just on passing and catching so we clean that stuff up we’re going to be in great shape.”

Osborne and Joey Stella each had three goals to pace the Patriots, who got back on track after a 6-3 loss last Saturday to Wilson-West Lawn ended an eight-game winning streak.

Both teams stay in SOL National play Friday. CB East, ninth in the District 1-6A rankings, hosts Council Rock South at 3:30 p.m. The Rams, who sit 21st in the 6A rankings with 24 making the postseason field, visit Pennsbury at 5 p.m.

I thought this was the most complete lacrosse we’ve played all year,” Banks said. “We came out, I think we played well. I think, again, it’s a lot of the kind of experience of the team, like everybody – having missed a year just a little bit off on the sharpness and stuff like that but I’ll got out on the field with this team anytime.

“We may make some errors and stuff like that but these kids come to play and they play all 48 minutes and I can’t take that away from them, that’s a pride thing and that’s them doing that.”

Pennridge’s seven first-half goals were the most CB East allowed in a game since the Patriots lost 11-1 to Wissahickon April 7 that dropped them to 0-2. In its next nine, East gave up just 2.2 goals per game, posting two shutouts and allowed only a goal to four other opponents.

“We started communicating more,” Bullotta said. “We started out slow then we got our energy up. We figured out our slides and matches and that’s all you needed to do. Played our game.”

Knepp came from behind the net and fond the top corner to pull East within 8-6 at 7:34 in the third. Just 41 seconds later, Stella ended a meandering run through by bouncing a shot in to make it 8-7.

Pennridge got off to a strong start as a Chris Fanelli goal then consecutive tallies from Carickhoff gave the Rams a 3-0 lead at 7:44 in the first quarter.

East responded by scoring the next three – Osborne with the first, Stella getting the next two with Osborne striking again for a 4-3 Patriots lead at 2:53.

The Rams knotted things in the first quarter’s last seconds, Frank Fanelli spinning free of a defense to dash upfield and connected with Jack Lenox, who found Carickhoff for a goal at 12.9 seconds.

Carickhoff tallied his fourth at 11:47 in the second quarter to put Pennridge back in front 5-4. Jake Stranix pushed the margin to two with his goal at 8:46.

Bullotta bounced in a shot at 5:08 to get East within 6-5 but Pennridge went into halftime up two after converting while a man up – Lenox scoring off a Fanelli assist at 2:09.