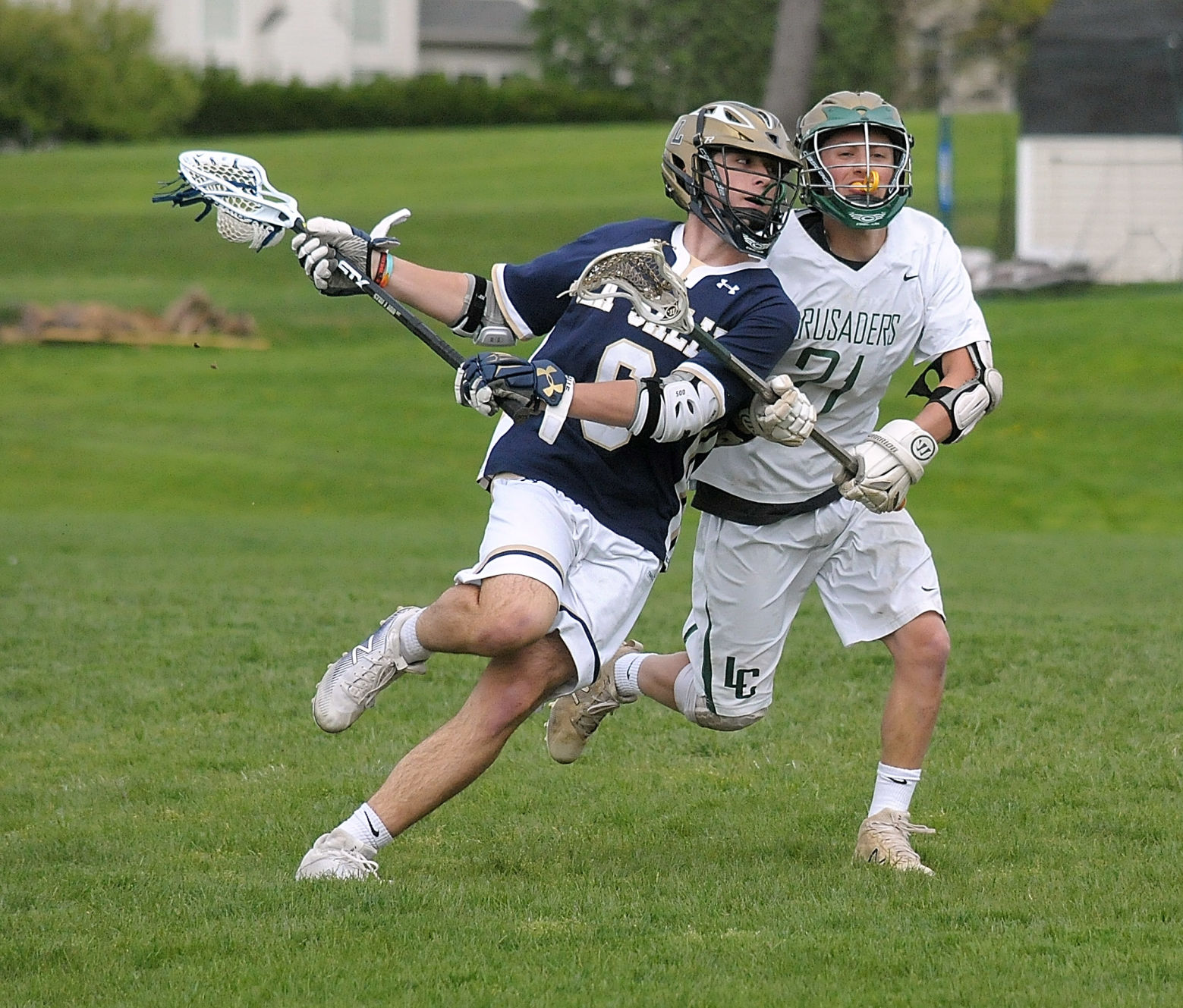 LANSDALE >> Being the lone man between the pipes is a main reason why being a goalkeeper has been appealing to Connor Flanegan.

“I love playing goalie because it’s such an independent position and I can put everything on myself,” the Lansdale Catholic sophomore said. “And I can’t blame anybody else for how I play so I bring that expectation to myself on how I should play on that caliber.”

And while the result of the Crusaders boys lacrosse team’s PCL matchup with was lopsided towards visiting La Salle — the Explorers rolled to a 15-0 victory — Flanegan did his best to frustrate the La Salle offense, finishing Monday afternoon with 13 saves.

“Connor is probably the best individual player to go through this program and he’s already only a sophomore,” said LC coach Christian Blair of his netminder. “I think his ceiling is incredibly high and for all purposes, I think he’s a first-team All-Catholic goalie. Today’s game helped make his case for that and we’re looking forward to having him here for another two seasons. He’ll be a great goalie to build around.” Flanegan was solid throughout, denying a few up-close opportunities and even got his helmet in the way on an Explorers’ shot, but La Salle was just too dominant on the draw and too effective in its offense. The Explorers (10-4, 9-0 PCL) scored eight goals in the opening quarter than tacked on a one more in the second quarter to take a 9-0 lead into halftime.

“We focused on executing,” La Salle senior midfielder Shane Osborne said. “Coming off a really good day of practice yesterday, we were getting after each other and, yeah, our focus was just on playing hard today and focusing on the little things.”

La Salle’s first six goals came from six different players as 11 Explorers finished the afternoon with a goal in the team’s third win in a row.

“They’re a great team. They brought a lot of energy and, you know they gave me a challenge,” Flanegan said. “That’s what I like to see in the PCL, especially there’s some no-so-great teams and there’s St. Joe’s (Prep) and La Salle.”

Timothy Mehlmann paced the Explorers with three goals and an assist  — collecting a natural hat trick scoring the last two goals of the third then getting the fourth’s first. Osborne, a Denver University commit and Drexel-bound Zac Coar both added two goals and an assist.

“In the beginning of the year, we were told we’re not going to be a team that one person wins games for us,” Osborne said. “We’re going to be a team as a whole. And that’s kind of how it’s played out so going to keep focusing on that, getting everybody involved, using everyone to our advantage.”

Monday’s victory was No. 501 for La Salle coach Bill Leahy, who reached the 500-win milestone last Thursday in a 10-1 win over St. Joseph’s Prep. Per laxrecords.com, Leahy — who has been the Explorers only head coach since he began the program in 1992 — is the 19th coach in the country to win 500 games.

“That was awesome just to be apart of it,” Osborne said. “It’s just cool to see him get recognized for that because he does so much for us. He sacrifices a ton and it’s pretty cool to see something like that pay off to someone who’s so passionate about what he does. It’s really special.” Lansdale Catholic (7-6, 5-3) did not have many offensive chances, with its first possession in the attacking zone coming late into the first quarter. But Blair saw facing La Salle as a way to prepare the Crusaders to make a strong push as they get into the end of the Catholic League regular season.

LC finishes the week with a pair of PCL contests — hosting Devon Prep 3:45 p.m. Wednesday then visiting St. Joe’s Prep 3:45 p.m. Thursday. The Crusaders are looking to earn a spot in the Catholic League playoffs — sitting just behind fourth-place Cardinal O’Hara, which is 5-4 — and also make the District 12 Class AA tournament.

“Technically we’re still in the District 12 hunt,” Blair said. “If we can beat St. Joe’s and then some other tiebreaker stuff happens we should be in the hunt still. So all eyes are on St. Joe’s and we’re hoping to get a big W against them.”

BOYS #LACROSSE: @LaSalle_Sports’s Shane Osborne with the overhand shot for a goal off a Zac Coar assist 1Q vs. Lansdale Catholic. pic.twitter.com/kfQ7vC96wv

“We always focus on no matter who we’re playing, what it is practice, lifts, game, big game, we want to get better every game,” Osborne said. “We’re almost in playoff, so we’re kind of just keeping that going.”

Osborne got the game’s scoring going in the first quarter off a feed from Coar at 10:54. Coar made it 2-0 at 9:28 while Osborne assisting on La Salle’s third tally, a William Vandegrift strike at 8:15.

“The real challenge for us was back cuts and communicating, especially for the defense,” Flanegan said. “That was our best game communicating but really their offense just brings an elite level of play.” Lansdale Catholic’s Ryan Corbett controls the ball as he moves up field near La Salle’s Shane Cassel during their game on Monday, April 29, 2019. (Gene Walsh/MediaNews Group)

Osborne’s second goal had the Explorers up 7-0 at 1:32 with Chase Rondeau scoring with seven seconds left in the first. Griffin Zobel collected the lone goal of the second quarter at 9:31.

A Grant Pinto goal then back-to-back tallies from Mehlmann made it 12-0 after three quarters. Mehlmann’s completed his hat trick followed by goals from Coar and Fix capped the afternoon’s scoring.