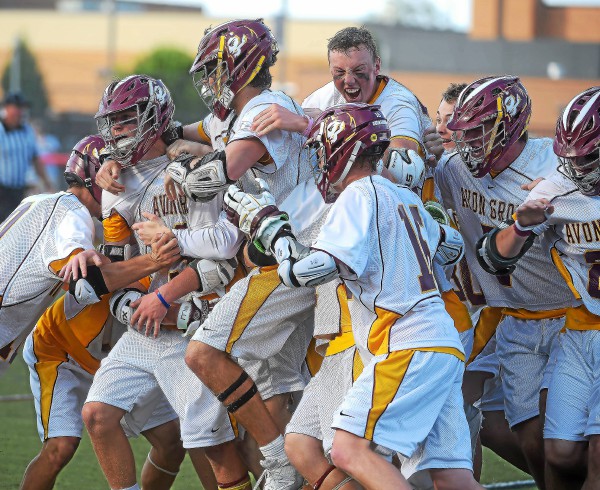 KENNETT SQUARE – The Red Devils did it a week ago to Downingtown West. And on Thursday, it was neighboring rival Kennett.

The Avon Grove boys’ lacrosse squad handed yet another previously unbeaten Ches-Mont foe its first defeat, racing out to an early lead and then coasting to a 12-7 triumph over the host Blue Demons. The final score may have been a bit deceiving because Devils emptied the bench down the stretch, but it’s also true that upstart Kennett kept fighting and finished strong.

“Hey, we played one of the best teams in the state and we can play with them,” said the Demons’ first-year head coach Jim Trowbridge.

“We are still figuring ourselves out,” said Avon Grove head coach Eric Jackson. “This was a pretty good team performance, but we can still do a lot better.

“We want to see intensity from start to finish. We had some lapses tonight.”

“(Avon Grove has) a tradition of winning and playing in big games,” Trowbridge said. “I think this was a big game for them and it was a real big game for us. We just weren’t quite ready.”

The Demons learned a lot, and at the head of the list is that you best not turn it over against the Devils, who will make you pay. Avon Grove scored the first six goals and all but one came as an immediate result of a crucial Kennett turnover.

“A lot of the game is won with ground balls and hustle plays,” Jackson said. “The guys just battled.”

In the early going, the Devils were much more physical and were able to impose their will on a Kennett squad that was having issues with poise. It was pretty clear that the Demons had not faced the kind of aggressive pressure Avon Grove employs. The Devils pounced on nearly every mistake, quickly transitioned to offense and were terrific in unsettled situations.

There was also another factor in the mix — Avon Grove was not completely satisfied with the intensity level in its two most recent outings: a 7-6 overtime win over Central Bucks East and a 9-6 triumph against Downingtown East.

“The last couple games we didn’t have that much energy,” echoed junior defender James Chastian. “Our goal was to come out (Thursday) with energy.”

At the end of the first quarter, the Devils had a 3-0 lead and a 9-0 shots on goal advantage. And well into the first half, the wide-eyed Demons were having great trouble just getting possession out of its own defensive end.

“This is a young team with a new (head) coach, and we are trying to turn this program around a little bit,” Trowbridge explained.

“If you think about (the Ches-Mont) league, the teams that makes the fewest turnovers are going to win. Our kids were nervous and we hadn’t played against this kind of intensity. But I also think that this will help us grow.”

In period two, senior attacker Zach Augustine registered his second natural hat-trick in eight days. And it was 6-1 at the half after Kennett’s James Lower scored in the final minute.

“I was just getting open and my teammates were finding me,” said Augustine, who also dished out three assists.

“If we work together as a team, everybody should get their fair share of it, and I shouldn’t have to do too much — or do too little.”

Goals by Mike Russo and Jackson Muller early in the third upped the margin to 8-2, but then the Demons started to get their footing as Jake Freebery and Matt Ward notched back-to-back goals.

With 10 minutes remaining and comfortably ahead 11-3, Jackson began substituting out his starters and Kennett wound up scoring three of the final four goals.

Lower finished with three and Sam Forte added two goals and an assist. But the unsung standout for the Demons was senior goalie Nick Kienzle, who had nine of his 13 saves in the first half. And sophomore Rich Hughson was rock solid on face-offs for Kennett.

“(Kienzle) showed up at practice and I’m like, ‘who is this kid?’ He’s been phenomenal,” Trowbridge said.

“What do you need to be successful? You need a faceoff guy and a goalie. We have those two.”

Muller and Russo chipped in two goals apiece for Avon Grove, who has now outscored five Ches-Mont opponents by a combined score of 64-18.

“The offense shared the ball and played together extremely well, and that’s always something that is good to see,” Jackson said.

“We just need to clean up some of the little things,” added Hanway, who had seven stops. “I think we have a lot of potential on defense.”

The Devils will know a lot more about themselves this Saturday when they travel to Manheim Township to take on the defending state champs.

“That will be a good test,” Jackson said.