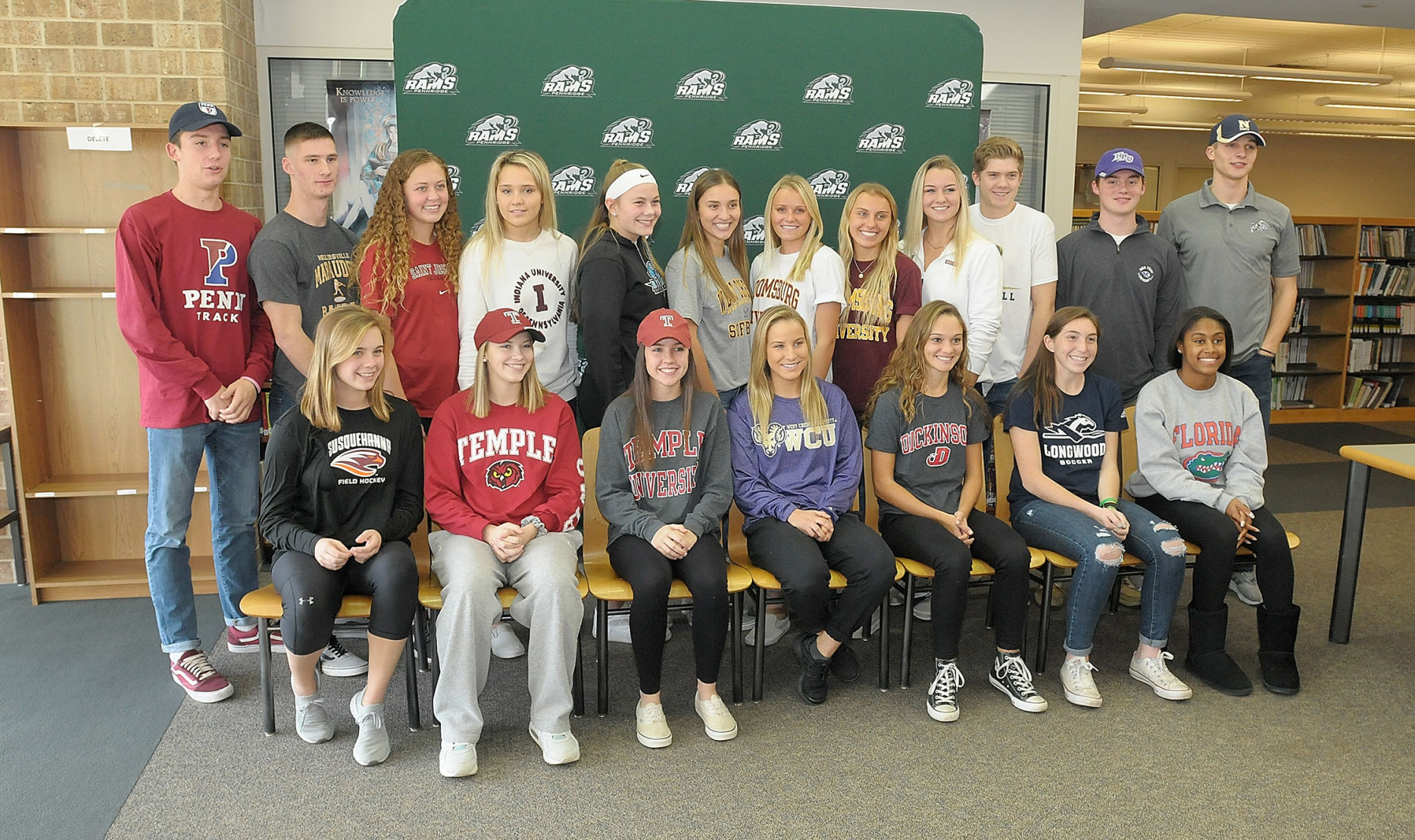 EAST ROCKHILL >> Logan Sudholz began rowing just a year ago and with every oar put in the water since then, the Pennridge senior has been working towards one goal.

“My parents signed me up for a summer camp of rowing,” Sudholz said. “And what was one week turned into two and then three and I was like ‘What does it take to go Division I?’ And I chased it every since.”

Sudholz’s hard work in her new-found sport has her heading to Florida next fall to attend the University of Miami and join the Hurricanes women’s crew team.

“I always thought Miami sparked my interest even before I started rowing,” she said. “They’re a great school academically and they have a great culture and everything and it seemed to fit.”

Wednesday afternoon, Sudholz was of the 19 student-athletes in a variety of sports gathered in the Pennridge High School’s library as the school honored the group for their college commitments.

“It’s unreal and people ask me that all the time how did you do this in a year and everything,” Sudholz said. “It seemed like this sport it was like if I wanted this, if I wanted to go D-I I could get it. And it just had endless opportunity and I just went for it.”

“I was just think it’s a lot of exciting things coming up with Hershey this weekend and signing,” Harrison said. “It’s a lot but it’s exciting.”

Harrison, who is looking towards a future in graphic design, said WCU appealed to her due to the Golden Rams strong women’s soccer program and also good word of mouth.

“I’ve heard about it a lot from my sister’s friends and people who have graduated here,” Harrison said. “It’s in a great location, it’s near Philly, it’s an hour from home and even the town around it, it’s just all-around a great school, a good fit for me.”

“When I first committed it was like ‘Congratulations, see you on the field,’” Harrison said. “And even my sister, she goes to Kutztown and she plays in the middle so we’ll play each other and that’s like the fun part. You still can be in contact with the same girls you went to high school with and play against them when you played with them.”

Kouri Peace made it seven Pennridge athletes heading to play women’s college soccer a she signed with the University of Florida. Peace, who plays for Penn Fusion Soccer Academy’s Development Academy team, opted for the SEC program over a number of other Division I schools — Virginia Tech, Vanderbilt, Tennessee — after liking the Gators’ family atmosphere after a trip to Gainesville.

“When I went on my official visit in September and I got to spend time with the team and the coaches in their element cause it was during their season. I really saw that they were family-oriented so everyone was really close, it just felt like they were a big family,” said Peace, who has her eye on a future in the medical field. “And I knew, since I’d be going so far from home, I would want something to kind of not replace it but give me a little bit of family. So that was really big for me.”

The Rams field hockey team had a trio of signees with Sydney Borneman and Caitlyn Amsden both signing with the Temple while goalkeeper Mackenzie Bross will be attending Susquehanna University. Borneman was a 2018 SOL Continental Conference first team pick with both Amsden and Bross named to the second team.

The Pennridge baseball and softball teams each had a pair of commits. For baseball, Jimmy Petrik —an all-conference honorable mention at pitcher last season — is heading to Millersville University with Hayden Maltby choosing Point Park University in Pittsburgh. Rams softball’s Makenna Patterson and Kiley Watson — a 2018 All-SOL Continental honorable mention at shortstop — are both staying in the area, with Patterson selecting to attend Holy Family University and Watson signing with West Chester.

Logan Lazasz and Jenna Lund both will play lacrosse in college with Lazasz — an All-SOL National Conference second-team pick as a junior — signing with the High Point University men’s program and Lund set to attend IUP and play for the Crimson Hawks’ women’s side.

Both Sean Yoder and Matt Eissler will compete on the Division I level with Yoder heading to Navy to play basketball while Eissler goes to Penn for track.

“Originally (Penn) wasn’t really in the list of schools that I was looking at until I would say around mid to late September,” said Eissler, who last season was third in the 800 at District 1 and ran on the Rams’ second-place 4×800 relay at states. “They finally reached out again, we had brief contact earlier that summer. Then they reached out and the coach, Coach (Steve) Dolan he offered me, he just said check it out, check out Penn, go down on an unofficial visit so I did and I just really liked it.”

Yoder, a two-time SOL Continental first-team selection, ultimately opted with Navy and playing in the Patriot League over Vermont and Colgate.

“I think the Naval Academy really presented me a very unique opportunity, that’s really what it came down to,” he said. “I can play basketball at a pretty high level. I can serve this country and get a very prestigious education as well.”

Yoder follows the same Pennridge-to-Annapolis path as Tim Abruzzo, who finished his high school career in 2012 as Pennridge’s all-time leading scorer and currently sits second on the list.

“I’ve talked to him over the phone, text, whatever, cause he’s actually serving now,” Yoder said. “Just kind of hearing his experience was big. But definitely I talked to him, I’m close with him, so I’m sure we’ll stay in contact as I go through this experience.”