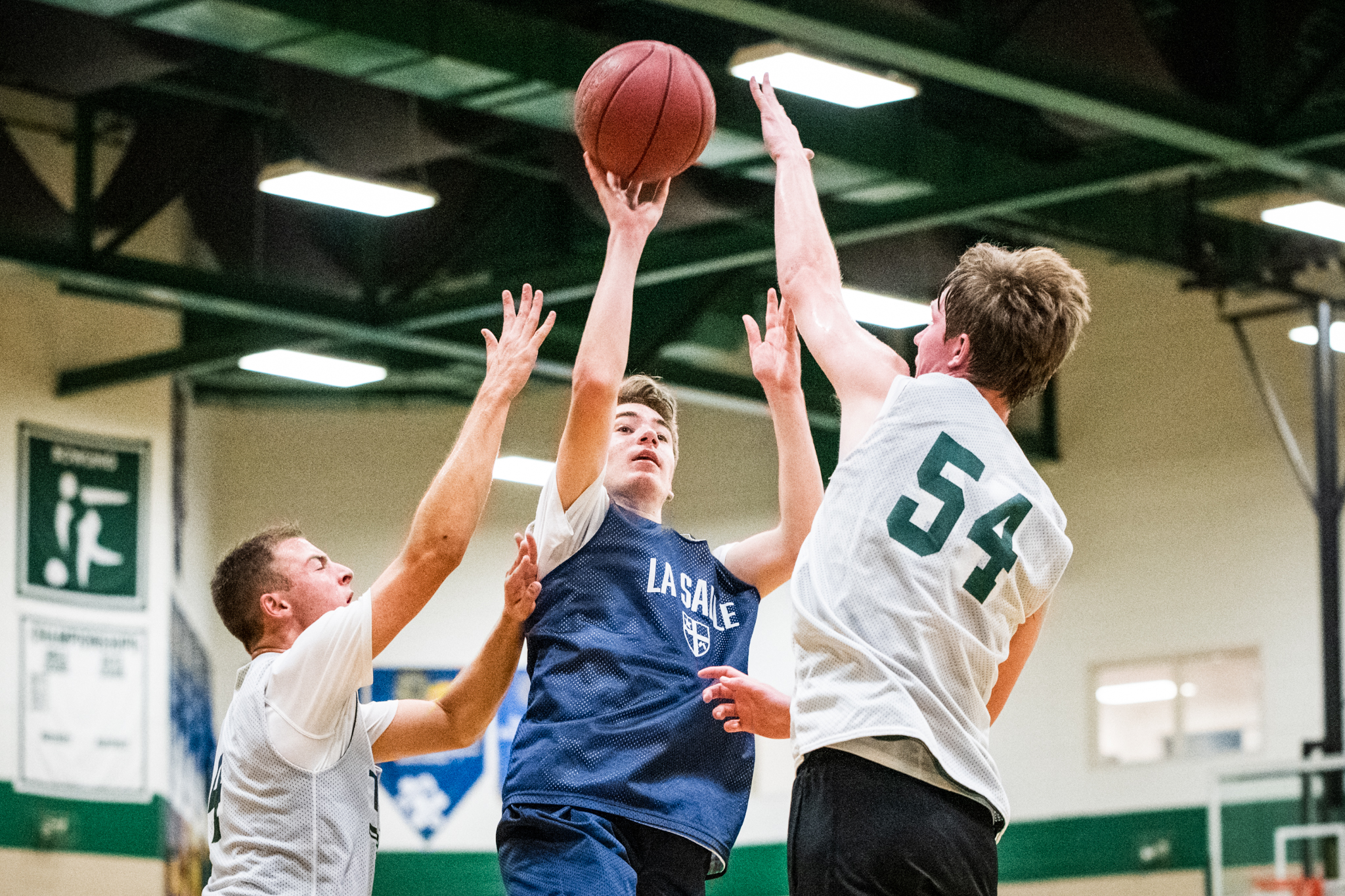 TOWAMECIN >> Jackson Conroy has gotten a good look at the next stage this summer.

A rising junior at La Salle, Conroy has played in two summer leagues with the Explorers, most of it against older, bigger, stronger and more experienced competition. Currently taking part in Dock Mennonite Academy’s summer league, La Salle is fielding an extremely young roster with the purpose of gaining that type of experience.

La Salle fell short in both its games Monday night, but the energy this group has was on full display.

“I’m trying to get the young guys in the flow of what we do at La Salle,” Conroy said. “A lot of guys are inexperienced and as one of the older guys here, I’m trying to help show them what they have to do for us to win.”

Last season, La Salle finished as the runner-up in the PCL playoffs and then reached the 6A state semifinals before bowing out to Pennridge. The two teams squared off in the second game of their back to back in Dock’s main gym,  but both looked vastly different than they did in March.

Conroy, who played JV last year, is one of three players along with rising sophomores Nick Varrano and Chris Williams, who also played with La Salle’s team in the Plymouth Whitemarsh spring league. Both leagues are competitive, but the teams in the PW league usually bring more players with varsity experience.

“I just want to get better every day throughout the summer from the workouts or playing against older guys,” Williams said. “It will get me more prepared for next year and hopefully helps me suit up for varsity. Seeing these guys who are bigger and stronger, it tells me I need to be in the weight room every day and keep working on my game.”

The Explorers have a lot of varsity minutes to replace next winter. They’re slated to return just one starter in sharpshooting rising senior guard Jake Timby and rising sophomore Sam Brown is the only returner who logged significant minutes off the bench.

While the majority of La Salle’s summer roster is guys who played JV or freshman ball last year, they also have a few incoming freshmen playing with them in Dock’s summer league. One of them, Horace Simmons, had some nice moments against Methacton and Pennridge and is getting a first-hand look at what high school competition is like.

“Last year, he was playing against eighth graders and could do whatever he wanted,” La Salle assistant coach Joe Magarity, helming the team in Dock’s league, said. “All of a sudden, he’s up against a 6-foot-7, 225 pound guy built like a tight end who is beating him up a bit. Now he has to learn how to get leverage, how to box out and that he can’t just jump for rebounds.”

Magarity said it’s tough to run the team’s offense because not all the players know it yet, so he’s just asking the guys to go out and play hard each Monday. It’s a balance of living with the mistakes like a player coming in anxious and putting up a fast shot or a forced pass leading into a turnover and knowing they’re learning with each play and seeing positive results like an extra pass leading to an open shot.

The Explorers gave up size to both Methacton, which was without most of its returning varsity contributors and Pennridge, who is also replacing a lot of last year’s varsity minutes but rebounded well. Varrano was strong on the glass in the second half against Methacton and a number of the Explorers’ young forwards battled with Pennridge rising senior Trent Fisher, a returning starter.

“I like to win every game I coach but I understand this is all about getting time for all these players and helping them make as few mistakes as possible,” Magarity said. “It’s really the fundamental stuff, not boxing out, turning the ball over, taking a shot too quickly, that’s what we try to focus on.”

Williams said he’s really noticed how quickly the older players he’s matched up against close out defensively and he’s working to get a quicker release on his shot. Even though he only has a year in the program, the rising sophomore added he likes being able to show the new players some of the ropes.

Conroy said while the two leagues are different, the goal of getting better every day is the same for both. As one of the comparatively more experienced players on the roster in Dock’s league, Conroy is also trying to use this summer to hone his skills as a leader.

“A lot of our young guys are going to have to step up this year for sure and we expect a lot of big things for the guys coming in,” Conroy said. “I’m excited for the future. We lost a lot of guys but we want to stay where we were last year. It’s going to be tough but we want those kind of goals and to do the best we can.”

Vote for the Delco Times’ Athletes of the Year in our Instagram contest
Ward, Lansdale Catholic put in the work, Pennridge finishes strong at Dock summer league
Loading Comments...
Comment
×