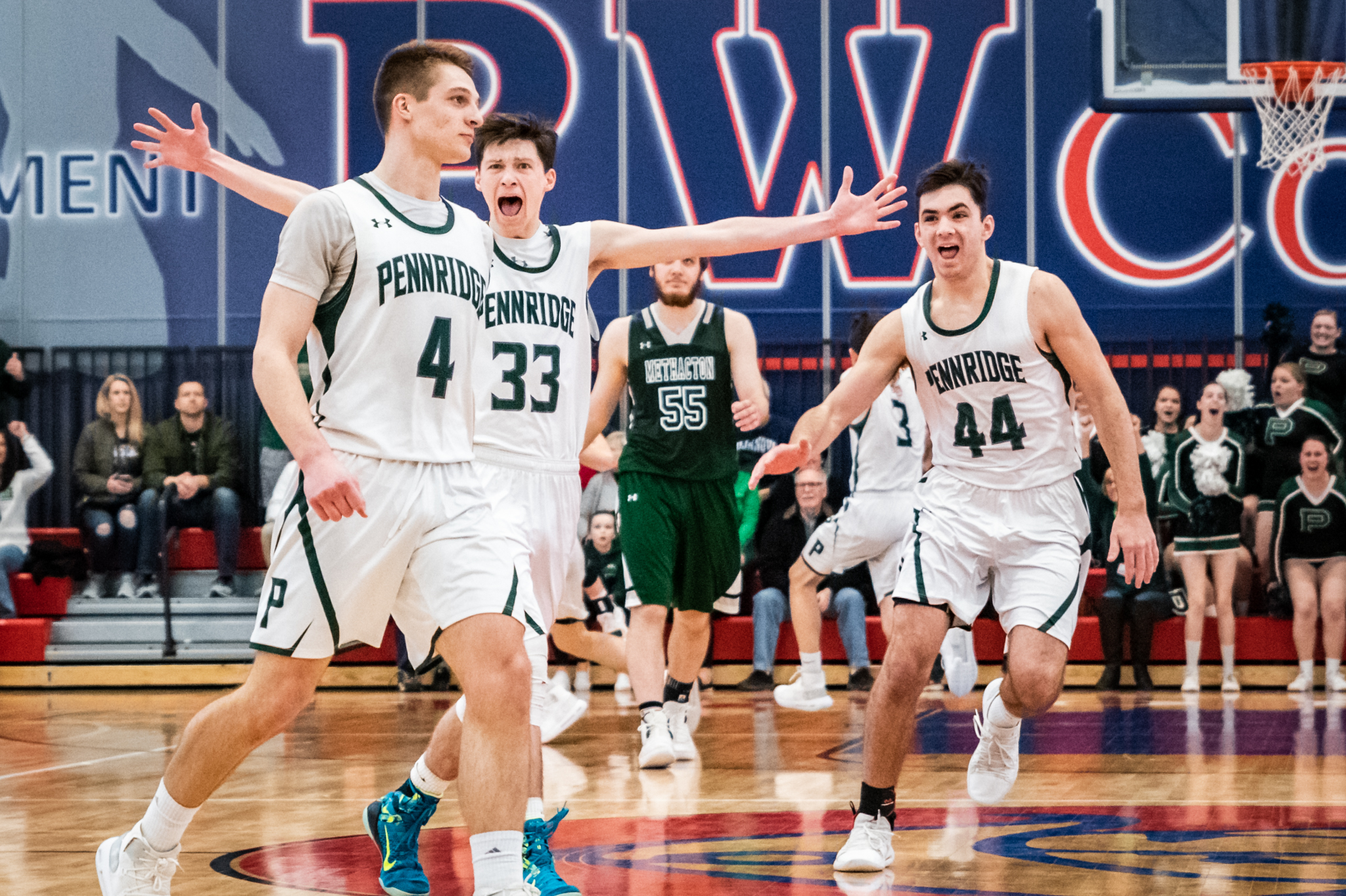 Pennridge's Jack Gillespie (33) and Jonathan Post (44) rush to embrace Sean Yoder (4) after he drains a 3-pointer at the buzzer to give Pennridge a 50-47 victory over Methacton in their PIAA-6A quarterfinal on Saturday, March 16, 2019. (James Beaver/For MediaNews Group)

WHITEMARSH >> The spectators who got into Saturday’s PIAA Class 6A quarterfinal between Pennridge and Methacton could not have scripted a better basketball game.

The crowd at Plymouth Whitemarsh High School was at capacity — some fans even turned away at the door. Two charged-up fan bases had their emotions swing back and forth as the teams matched each other run-for-run, neither squad ever in complete control.

In the final moments of a tie basketball game, the best player on the court had the ball in his hands. Pennridge senior guard Sean Yoder, headed to play at the Naval Academy next year, wound the clock down and prepared for one last shot.

“Between the legs twice and then step back left,” Yoder said. “And then it swooshed.”

Yoder’s shot looked good the moment it left his hands. It fell through the net with less than two seconds left, giving Pennridge a 50-47 victory over Methacton and clinching its first state semifinal berth ever. Moments later Yoder was buried on the court under a pile of his teammates, celebrating a trip to the state semifinals.

“When you’re young, you kind of look for those shots,” said Yoder, who finished with 17 points. “That’s what you live for. As a kid and you’re watching these games on TV, you see those kind of shots, and you’re like, ‘One day I want to do that.’”

After Yoder knocked down a pair of free throws to tie the game 47-47 with 33 seconds left, Methacton (24-8) had a chance to win the game. Hoping to pressure the Warriors into a turnover, the Rams (26-5) were aggressive on the inbounds play. Methacton had to use its final timeout to avoid a five-second call.

On the Warriors’ next try to inbound the ball, Erik Timko’s pass to Owen Kropp, who was defended by Yoder’s younger brother Luke, went out of bounds on the other end of the court as Kropp fell to the ground.

“All five guys locked down on that inbounds pass, which gave us the opportunity to get that shot,” Sean Yoder said.

“They were out of timeouts, we were putting pressure on the ball,” Pennridge head coach Dean Behrens said. “We had to gamble … Luke Yoder makes a great play.”

Pennridge celebrates after Sean Yoder (4) sinks a 3-point shot to give them a 50-47 victory over Methacton in the PIAA 6A State Quarterfinals Saturday. (James Beaver – For MediaNews Group)

Timko, who led the Warriors with 20 points, guarded Yoder for the majority of Saturday’s game, forcing him to make tough shots throughout.

On the last shot, he played tight defense again and even had in hand in Yoder’s face, but the Rams’ senior guard created just enough separation with his step-back move.

“That was just a great shot,” Timko said. “We played him pretty well, but he’s a great player as you can see. That’s just a tough shot that he made.”

“As a team we played extremely well, competed,” Timko added. “It came down to the last shot, and it went in.”

Yoder’s shot was Pennridge’s third buzzer-beater of the night. The Rams tied the game at halftime, 23-23, on a deep three from senior guard John Dominic, who followed Yoder with 15 points in the game. They trailed by as many as six points in the third quarter before senior guard Jack Gillepsie grabbed a loose ball and tossed it up in before the buzzer to pull Pennridge within two, 37-35.

Pennridge’s Sean Yoder (4) goes in for a hard layup just out of Methacton’s Jeff Woodward’s (55) reach in the PIAA 6A State Quarterfinals on Saturday. (James Beaver – For MediaNews Group)

After Gillespie’s shot, Penridge senior forward Jon Post scored two buckets to start the fourth and Yoder added another for eight unanswered points, putting the Rams ahead, 41-37, with a little more than six minutes to play.

Then came five straight from Warriors senior guard David Duda, who finished with 10 points, and a three by Timko to put Methacton in front, 45-41, three minutes later.

Luke Yoder hit a contested midrange jumper and Post knocked down a shot in the lane to tie the game. The Warriors went back ahead on a drive by Kropp before Sean Yoder’s free throws tied the game and his stepback three won it. Post had 13 points for Pennridge. Junior forward Jeff Woodward scored 12 points for Methacton.

“John Dom (Dominic) played well for us tonight, crazy, stepped up big time,” Yoder said. “Jon Post had a couple big shots toward the end there. Jack had the buzzer beater before the end of the third quarter. Luke getting that steal that kept us alive, hitting that pull-up jumper right there. I can’t say enough about my guys.”

Pennridge’s Jonathan Post (44) pulls up for a big jump shot to keep the game close in the second quarter of the Rams’ PIAA-6A quarterfinal against Methacton on Saturday, March 16 2019. (James Beaver/For MediaNews Group)

This was Methacton’s longest postseason run in school history. The Warriors finished with second-most wins in a single season by the program, finishing one behind the 25 victories set by the 2015 squad that went to the second round of states.

“When we look back on it, it will kind of sting, just knowing that we were a basket away from going to the final four,” Timko said. “Other than that, we’ll probably look back on it and be like, ‘ Wow. We did something special for this program.’”

The Class 6A tournament has just one district champion remaining, District 10’s Kennedy Catholic, which will face District 1 runner-up Coatesville on Tuesday. Two of the other state favorites are out after La Salle defeated Roman Catholic on Saturday and Pennridge’s second round win over District 1 champion Abington.

With three state wins already under their belt, a large group of fans supporting them and only more history left to make, the Rams feel they have as good a shot as anybody to pick up two more victories.

“Nobody does expect us to be here besides us, besides our community,” Yoder said. “They travel so well. I’m so appreciative of them coming out and being loud for us.”

“At this point, what the heck? Let’s try to win the states,” Behrens said.