Williams a calming influence as Ridley fights past Interboro 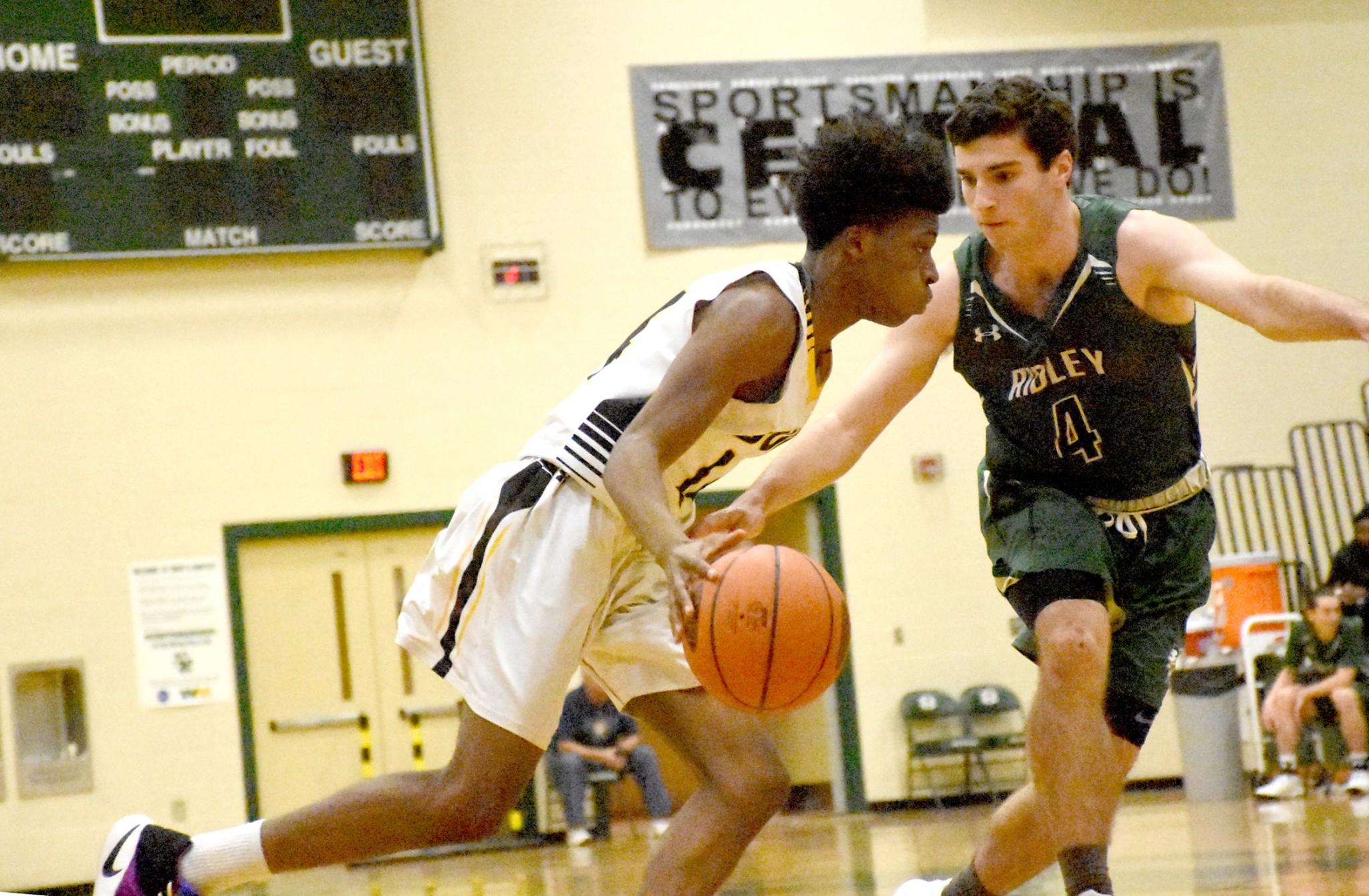 RIDLEY TWP. >> Malachi Williams talks fast, eager to get his point across, words spilling out hot on each other’s heels.

With the game in the balance Wednesday evening, though, the point guard’s ability to slow his team down to a steady and error-free pace made the difference for Ridley.

Williams was the calming presence in an occasionally hectic and rarely pretty affair, but Ridley walked away with a 65-51 win over Interboro at the Green Raiders’ holiday tournament thanks to a 16-0 run in the fourth quarter.

That late spurt owed to the disparity in composure when each team had the ball, created in part by Williams’ patience with the rock.

Kyree Capers soaring in on the glass. 43-40 Ridley. pic.twitter.com/BRGB7ZfD6M

Interboro led in the third quarter, tied the game at 43 a minute into the fourth and trailed just 46-45. But 10 consecutive empty possessions — including four of the Bucs 18 turnovers on the day — offered Ridley room to make its run. And while Interboro may have been in a giving mood with the ball, Williams made sure Ridley didn’t reciprocate.

“We were under control,” Williams said. “We were making sure we controlled the tempo of the game. That’s what we wanted to do from the beginning, control our tempo, dictate what they were doing. In the beginning of the game we didn’t really do that, but in the fourth, we really stressed that we controlled the tempo, got the shots that we wanted and didn’t rush anything.”

Williams scored 12 points, including a backbreaking bucket on a fifth-chance point on the offense glass to put Ridley up, 50-45. He dished six assists — hitting Jack Grace on a skip pass for the 3-pointer that put Ridley up for good at 46-43 — and grabbed eight rebounds. Under Williams’ watch, Ridley (3-4) committed just eight turnovers, a low figure for a team full of underclassmen with limited experience from last year.

With Williams manning the controls, Ridley spread the scoring around. Clark led the way with 17 points. John Mastella added 16, with he and Clark each scoring six points in the final frame. Mastella pocketed three steals in the fourth, contributing to that Interboro barren streak that included four turnovers on 10 trips up the court. And Kyree Capers posted a double-double of 10 points and 10 boards.

Though Ridley only ended up with a 35-28 edge on the glass, it seemed much larger thanks to sequences like Williams’ put-back in the fourth, with Capers and Clark extending possessions to hurt the Bucs.

“It was just who wants it more, who wants to go get the ball more,” said Clark, who grabbed six rebounds. “It was more of a pride thing. It’s like me and my teammates, we’re doing something for each other. It’s a teammate thing, it’s a brotherhood. It’s the right thing to do, don’t leave someone hanging.”

Interboro’s poise eluded it in dropping its 50th straight game dating back to the end of the 2014-15 season. Albert Pewa provided a boost with 17 of his 22 points after halftime, and Carley Jones added 18 points to go with eight rebounds and three blocks after sitting out the first quarter. Jones’ 3-pointer tied the game at 43 early in the fourth, and he and Pewa constantly took the initiative off the bounce. That impetus allowed them to erase a stretch of 6:39 to start the game without scoring, leading to the Interboro (0-6) trailing most of the way.

But where those two rose to the late-game occasions, too many Bucs shied away, a tendency that more than two full seasons without a win can engender. And with so thin a track record of recent success, the knack for closing out games is one of many things on the teaching list for first-year coach Conrad Kirkaldy.

“We’ve got to come together as a team,” Pewa said. “Younger players are like bickering and arguing with each other, but I think if we come together, we’ll get a win soon.”

Albert Pewa ends a rough first quarter for Interboro with a 3-pt play. After 1, Ridley leads 13-6. Enoch Clark leads all with 6 pts. pic.twitter.com/oddt7xc5LY

Part of what Interboro needed down the stretch was someone like Williams, who could avert chaos before it cropped up.

Also at the Ridley Holiday Tournament:

Cardinal O’Hara 52, South Philadelphia 38 >> Garrett Ripp scored 17 points, including three 3-pointers, and Jordan Hall chipped in 10 points for the Lions, who advance to Thursday’s final against Ridley. Interboro and Southern play in the consolation game.

At the Rustin Tournament:

Upper Darby 57, Pottsgrove 45 >> Diby Keita scored 11 points, and Mamadou Toure and Nasir Greer added nine points each as the Royals (5-2) turned up the pressure to notch a 26-9 edge in the third quarter on the way to victory.

At the Unionville Tournament:

Chichester 61, Council Rock North 55 >> It was all about balance for the Eagles: Amiri Stewart, James Hendricks and DaQuan Granberry each provided 14 points, and Josh Smith chipped in 12 in the overtime win.

Stewart, who dished seven assists, hit a 3-pointer to put Chi up for good in the extra session. Hendricks added 11 rebounds, and Granberry went 3-for-4 from the line for Chi (5-1).

At the Penncrest Holiday Tournament:

Strath Haven 52, Olney Charter 41 >> Jordan Graves went off for a career-high 19 points, including five 3-pointers, and Cooper Driscoll added 17 for the Panthers (3-4).

At the Vanguard Invitational:

Grant Sareyka led TCA with 12 points. The Crusaders (2-5) take on Harriton Thursday at 6.
At the Varsity Club Tournament:

Garnet Valley 56, W.C. East 53 >> Connor O’Brien scored 11 points and hit a layup off a full-court pass in the final minute to put the Jags ahead for good. Austin Laughlin led the way with 16 points for Garnet Valley (3-2), which advances to the final against Archmere Academy Thursday at 6.

At the Steve Juenger Tournament:

Kennett 58, Haverford 46 >> JT Smyth scored a game-high 15 points, and Jake Ruane and Luke Verzella chipped in 10 points apiece, but the Fords (2-5) saw a two-game winning streak snapped as they fall into Thursday’s consolation game against Collegium Charter at 6 p.m.

At the Benedictine City Classic:

Archbishop Ryan 41, Episcopal Academy 36 >> Matt Dade scored 14 points, but the Churchmen (6-6) went without a 3-point field goal for the first time all season in the setback.