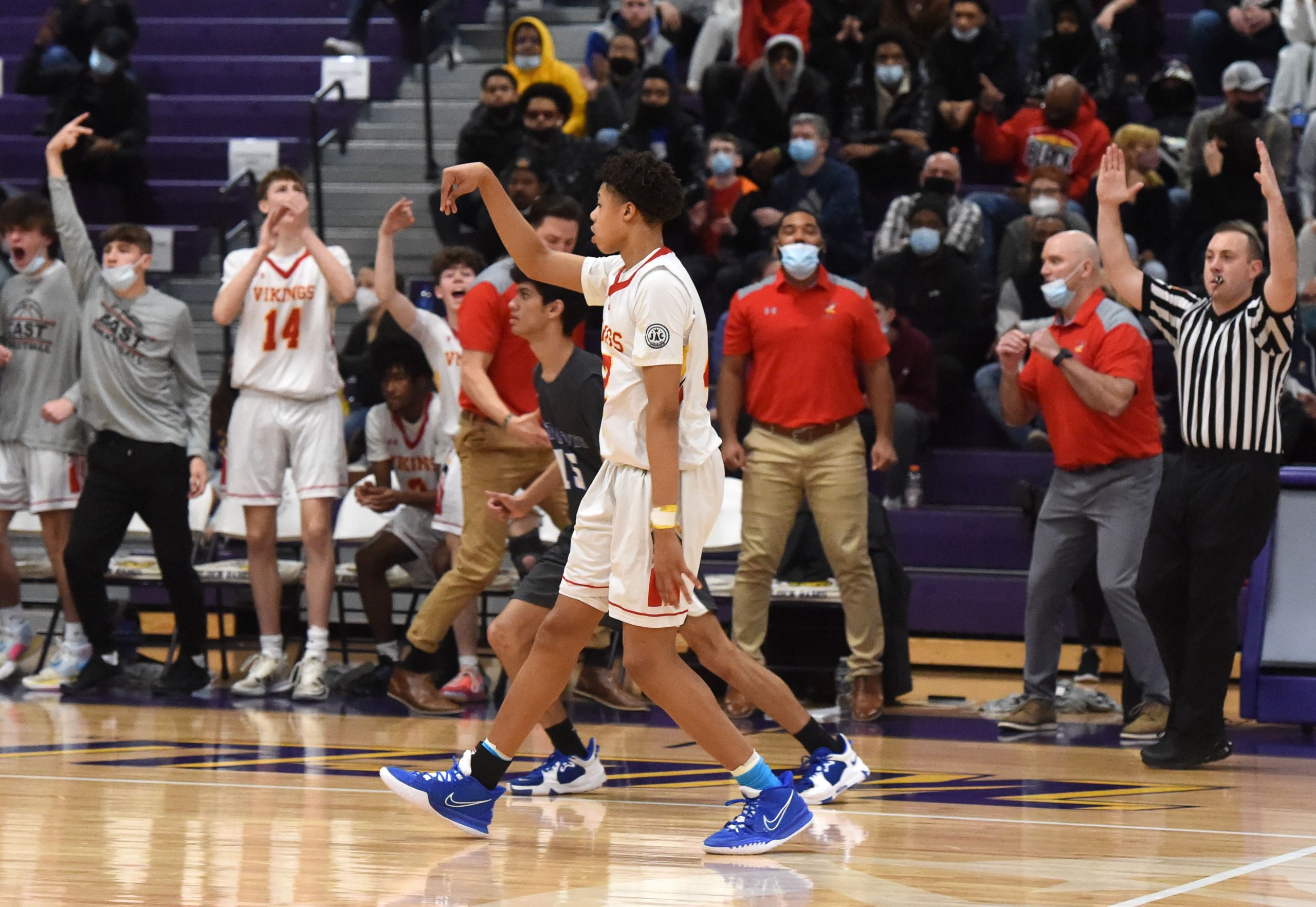 WEST CHESTER >> It was so nice for the West Chester East boys basketball team they did it twice. And then said, why stop there when three is even better.
Saturday, the Vikings opened up daylight and held off a late Great Valley rally to post a 59-52 victory in the Ches-Mont Final Four at Hollinger Fieldhouse at West Chester University to reach their third straight championship game.
East (17-6) will face National Division foe and regular season champion Downingtown West on Tuesday at 8 p.m. at West Chester.
“Props to Great Valley. They came out and stormed and came back in the second and was up at halftime,” said East coach Tom Durant. “You have to do something in the third quarter and these guys did.”

The Patriots (16-6) were up 21-20 at halftime as freshman sensation Cam Wallace scored 10 points in the second quarter after being held scoreless in the first. There was five lead changes in the three minutes of the third before East gained control. The Vikings took the lead for good on a drive from Jose Ramos to make it 26-25. KJ Cochran made it 28-25 moments later on a jumper. Josh Sherlock bumped the advantage to five on a putback.
Great Valley cut it to 30-29 after two straight baskets. But, the Vikings went on an 8-0 run to end the quarter to go up 38-29 heading into the fourth.
“They didn’t think they were down in the locker room,” added Durant. “We said let’s fix our problems, because we had some problems on defense. The upperclassmen leaders said let’s lock down on their two best players, 12 (Wallace) and 23 (Connor Gal), and then they got looks for Ryan Price.”

“We really had to shut down (Wallace and Gal) from getting to the rim and that was our game plan,” added Sherlock.
After Price hit a 3-pointer midway through the quarter to give East a 48-33 advantage, the Vikings started to feel their place in the final, but before they could celebrate, Great Valley staged a late charge to make it uncomfortably close.
Trailing 59-41 with two minutes left, the Patriots scored the final 11 points to cut the deficit to 59-52, but the clock ran out to send the Vikings into the final.
“When you play a team like East, you have to have everybody playing and we didn’t,” said Great Valley coach CJ Savage. “Connor Gal, who’s been supberb for us all year, had an off night, but give East credit, they played well.”