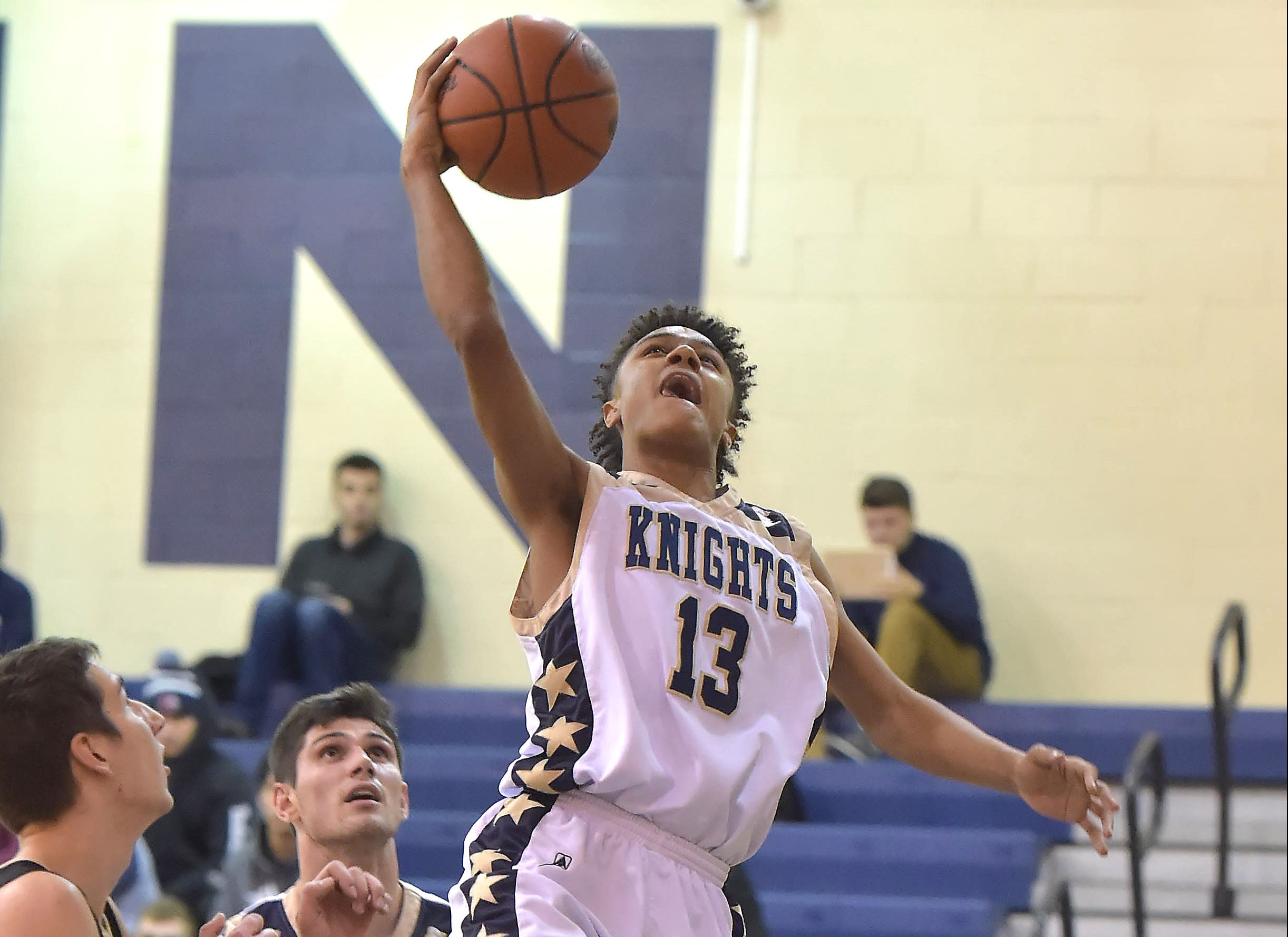 WESTTOWN >> It’s hard to be more impressive on a basketball court than the West Chester Rustin Golden Knights were Thursday night.

In a Ches-Mont League American Division game against visiting Great Valley, the Golden Knights shot 58 percent from the field, put four people in double figures, harassed Great Valley on defense and caused 12 turnovers, and hit 22 of 26 from the free throw line.

It all added up to a very impressive 86-48 runaway win to keep the Golden Knights tied with Unionville, all but locking up a spot in next Saturday’s Ches-Mont Final Four.

“We played tonight exactly like we want to play all the time,” said Rustin sophomore Jacob Barksdale. “We don’t want to have one player get all the points. Tonight, we got a lot of touches for everybody and it was great to see Ryan Seelus and Kolbe Freney come off the bench and get minutes and points. Tonight was a total team win.”

Great Valley (5-3 Ches-Mont American, 9-10 overall) led by five points after the first quarter on the strength of Julian Thomas’ eight points. Thomas led all scorers with 19 points, but the Golden Knights (6-1, 13-5) outscored the Patriots, 30-10, in the second quarter to take a commanding 40-25 advantage at halftime. At one point, Rustin went on a 16-2 run to take over the game.

Barksdale was a terror inside for the Golden Knights, scoring 18 points to go along with nine rebounds. IV Pettit drained a long 3-pointer from the corner. Great Valley turned the ball over six times in the second quarter, which led to eight Rustin points. Griffin Barrouk tallied 16 points for the game, including four 3-pointers. One of those threes came at the buzzer to end the first half, and gave the Golden Knights the 15-point halftime lead.

“We fell behind them the first time we played them,” Barrouk said. “But then we pressured the ball and got back in the game. Tonight we started early and it seemed to bother them a little. We also moved the ball well on offense and got some good looks.”

Rustin did not let up in the third quarter. Seelus started things off with a nice driving layup to make it a 42-25 game. After a Will Fredrick jumper, Pettit completed a three-point play to make it a 45-27 Knights lead. Pettit tallied 16 points on the night, including two long 3-pointers. Barrouk added another trey and after two straight Great Valley misses, Barksdale scored on a follow and it was a 59-38 West Chester Rustin lead after three periods.

Petrit started things off in the fourth quarter just like the Golden Knights finished the third. The silky smooth sophomore drained a three from the left corner for a 62-38 Rustin lead. Bryce Pew then added a three-point play for a 70-42 Golden Knights lead with just over four minutes to play and both coaches cleared their benches. The Golden Knights got good productive minutes from Freney, Seelus and Pete Reinheimer.

“We tweaked the lineup a little tonight,” Rustin coach Keith Cochran said. “We looked to get more guys involved because with the playoffs coming we are going to need everybody involved. Tonight was a very good win for us and we have to keep learning and progress. We took a step forward tonight.”