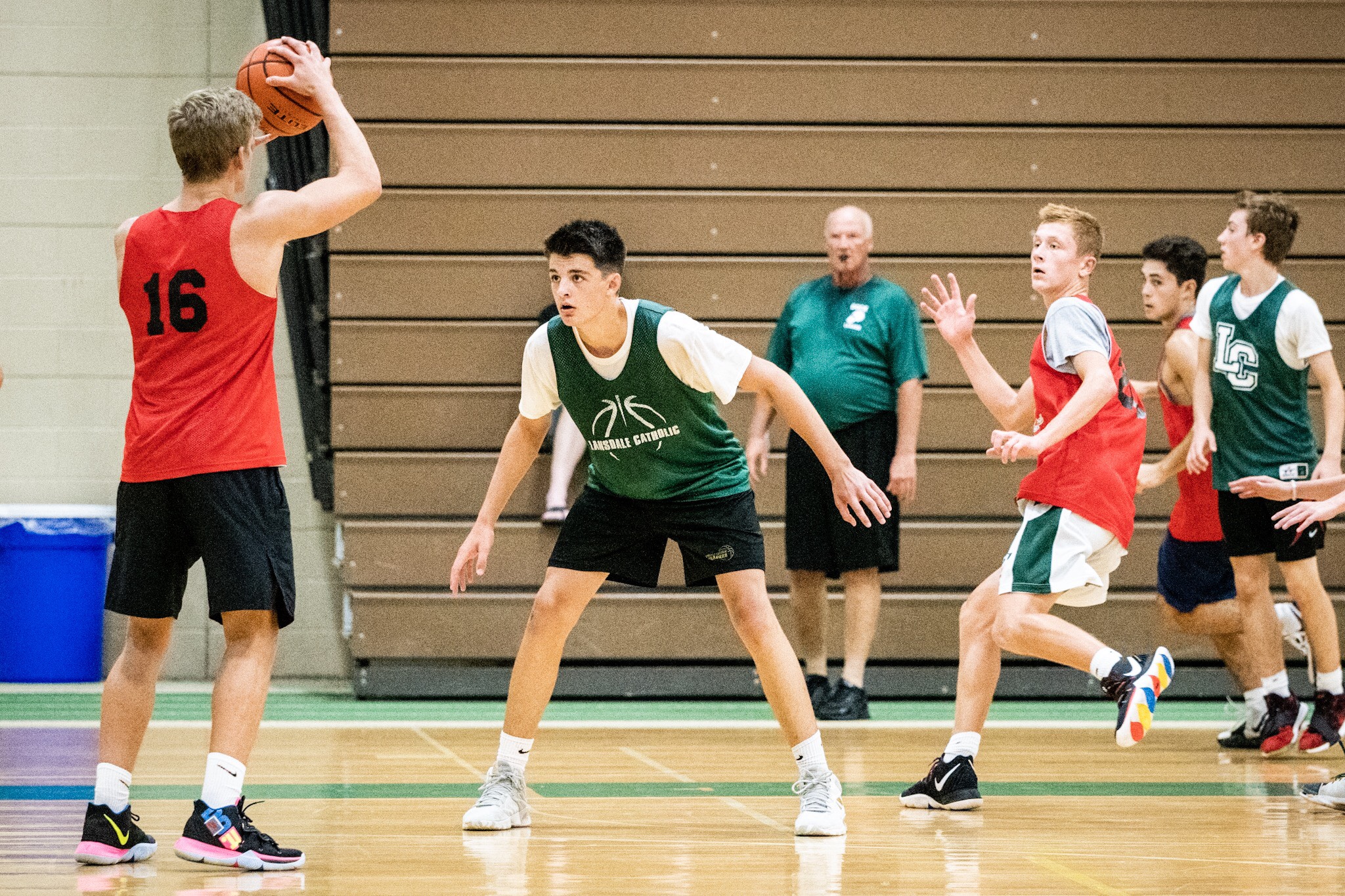 A guy the Crusaders are going to count on a lot this coming winter, Ward’s progress would hinge on his ability to get to the basket and finish. It meant putting him in some uncomfortable positions this summer, but the rising junior took it all in stride.

Ward and LC wrapped up their time in Dock Mennonite’s summer basketball league Monday feeling pretty good in their results.

“I thought it was pretty good, especially for a young team coming out here,” Ward said. “We did better than we probably should have. We’re just looking to get their confidence up and have them take the shots they know they can make.”

Ward, who also plays soccer for LC and started at goalkeeper last fall, will ideally play as a wing once the regular season gets going. In the summer, where the Crusaders didn’t have the numbers every week, Ward found himself playing bigger.

Monday, that meant playing as the team’s de facto “five” in LC’s games against Souderton and Phoenixville and trying to hang with the bigger bodies on the block. In the long run, it’s definitely not a bad thing, as Ward got plenty of chances to try and finish around the rim.

“I’ve been working on getting shots up but also getting to the rim and not settling for bad shots,” Ward said. “We’re going to have to stay together as team, continue to work hard and not put our heads down if we have a couple losses in a row.”

LC will again start the season as part of the Jim Church Classic at Souderton along with the host Indians, defending champion Council Rock North and newcomer to the field Dock Mennonite.

Corbett liked the effort his guys brought each week and especially Monday when the Crusaders were a little shorthanded. While his competitive side wants to win every game, Corbett knows the summer league is about development and to that end, was good for his younger players.

“We always look at summer league as a good chance for these guys to just play together,” Corbett, who as usual spent the time prior to the first game working through sets with his players, said. “We try and run an offense, not everybody understands it and we know that. We just ask for good effort on the defensive end, how to box out, how to play as a team and just get these guys as many reps as possible.

In Ward, Corbett sees someone capable of taking double-digit free throws on a nightly basis, but only if the upcoming junior can thrive around the rim. With returning center Hunter Healy limited this summer, Corbett said he kind of asked Ward to take one for the team by playing big but liked how Ward handled himself.

To that end, Ward started the game against Souderton with a drive to the rim that drew contact and two free throws. A little later, he battled for and won an offensive rebound and got another trip to the line on the putback attempt.

“It’s one thing I’ve asked him to work on,” Corbett said. “He has the ability to get to the rim, take the contact and finish. As he gets stronger physically, he’s going to be able to do that and if he gets a little more confidence in his jump shot, he can be a really dynamic player.”

Corbett said the players will get a little time off before school starts back up and open gyms with it. While Ward won’t be at all of them, Corbett isn’t worried because he knows the junior will be training every day with the soccer team and still getting his basketball work in on the side.

Life in the Catholic League is a grind, one Ward got a full experience of last year.

“The hardest thing is knowing that after one game, there’s no break and there’s another good team coming right after,” Ward said. “It helps get my confidence up and hopefully, it’ll be even higher in the winter.”

Rams on the Rise

Pennridge brought in the closers Monday and finished summer league with a pair of wins.

After last year’s storybook run to the PIAA 6A title game, the Rams will have a different look this coming season but it’s not an area they’re totally unfamiliar with. Last summer, Pennridge had two returning starters and a host of players ready to seize the opportunity in front of them.

This summer, the Rams had two returning starters and a host of guys ready to seize their opportunity.

“I felt like we played a lot better than we did last summer, having a lot of guys without a lot of  shared playing time in limited amount of reps, we struggled to win games,” rising senior forward Trent Fisher said. “This year, I think we finished 9-3 and we’re all gelling together pretty good.”

Last summer, Sean Yoder and Jon Post weren’t at most summer league nights due to AAU commitments as they tried to secure their college futures. Fisher and Luke Yoder, Sean’s younger brother, were regulars this summer which coach Dean Behrens helped fuel the on-court chemistry.

Usually, Behrens’ toughest task was finding minutes for all the players who showed up. Monday, the older guys got most of the playing time in the first game against Dock while the younger ones carried the bulk of the minutes against Souderton before the vets finished the game out in overtime.

“Last year we won the last two games and I thought it helped guys like John Dominic and Jack Gillespie with confidence and I’m hoping it’s the same for the guys who played JV last year,” Behrens said. “We’re going to be asking those guys to play a lot of minutes, the guys like Paul Croyle, Anthony Phillips and Christian Guldin. We’ll be asking them to step up.”

Behrens cited the similar spot both teams were in last summer and how the reps paid off during the regular season. On top of Dock’s league, the Rams’ JV guys play in another league and Fisher said they pretty regularly organize pick-up games amongst each other.

Fisher felt like everyone committed to what the program did last year and they’re focused on trying to hang another banner in the gym. To that end, having the young players in steady attendance during the summer is a way to expose them early.

“I think the best thing to tell them is be ready to commit,” Fisher said. “It’s a lot faster than playing JV. When I was a sophomore, I didn’t play a lot of JV so I worked on my conditioning. That time goes by so fast and you have to be ready to go at any moment.”

Fisher added the Rams played very unselfish on offense throughout summer league, an approach they’ll need to offset the scoring totals left by Yoder, Post and the other departed seniors. Some of the most important shots of last season came from the players who took advantage in the summer and Pennridge is hoping that repeats again.

Guldin has some varsity minutes to his name while Croyle, a mainstay on Pennridge’s baseball team, had a strong summer league. The reps in the summer are invaluable to Behrens, who gets a chance to see who might be able to fill out the rotation or make that jump from JV to varsity.

“We’ve got a good group of guys, I’m excited to see the challenges and how it’s going to be different. We’re still going to play hard, I’ll tell you that and then we’ll see what happens.”