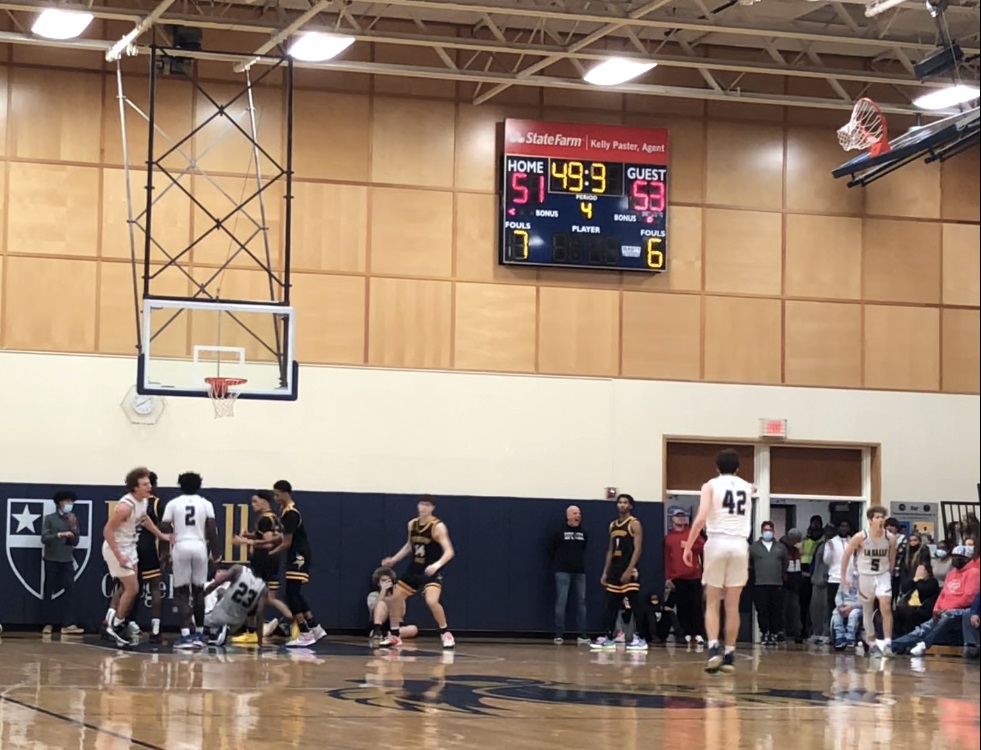 Whether it’s the close proximity between the schools, the fact plenty of guys on both teams know each other well or that when the Explorers and Vikings meet, the stakes are usually very high, Varano has come to see Wood on a similar plane as St. Joe’s Prep in terms of being a team he really, really wants to beat. Varano played a key part in making that happen Friday, scoring 12 points including the go-ahead three in a wild fourth quarter comeback.

Varano and Horace Simmons finished strong and La Salle was able to hand Wood its first loss in PCL play this season with a 66-61 decision on the Explorers’ home floor.

“This is everything, we never stop fighting,” Varano, who scored 19 points, said. “It’s all props to our coach (Mike McKee), he gets on us all the time if we’re not playing our hardest and we’re not always fighting.

“We look at them as our rivals, they’re not that far from us, so it’s a game we always want to win.”

La Salle (13-5, 6-3 PCL) has now won six of seven in the Catholic League but it was the one, a 63-61 setback to Neumann-Goretti on Wednesday, that got the Explorers focused up for Friday. Varano said his team had chances to win against the Saints but due to some careless plays, felt it let the game get away from them.

From one senior to another, it was the exact same thing Archbishop Wood guard Justin Moore pointed to after Friday’s clash. The Drexel-bound point guard, who netted his 1,000th point in his 21-point effort, also pointed the finger his way for a couple of fourth quarter turnovers that helped fuel La Salle’s rally.

“It starts with taking care of the ball, mostly on my part,” Moore said. “We have to bounce back stronger as a team. It’s a loss, that happens. We came up against a strong team in a tough environment and gave up a game, they shouldn’t have won that, we gave up the game. Now it’s time to learn how to bounce back and learn how to regroup, that’s how a young team builds.”

The Explorers started hot, jumping out to a 15-8 lead but saw it all erased as Wood came back to take a 20-19 lead on a Moore bucket two minutes into the second quarter. Sam Brown, who scored 17, and Varano fixed that problem by attacking the Vikings’ press by going hard to the rim.

While La Salle can beat teams with its outside shooting, the aggressive mindset led to a pair of and-one plays for Brown and a 31-23 lead as the result of a 12-3 run to the 3:08 mark of the second. PCL teams are hard to put away however and Wood roared back, tying the game 31-31 on a three by Jahlil Bethea but it was the hosts taking the lead to halftime thanks to a trey by Joey Shields with two seconds on the clock.

“We have a lot of versatile guys, so if they want to take away our jump-shots, then we can get to the rim on them,” Simmons said. “We don’t have to be just focused on hitting jump-shots.”

Moore, who had 11 first half points, seemed inspired by the get-to-the-rim idea and shot six free throws in the first three minutes of the second half then spent the rest of the quarter setting up Mike Knouse as the senior guard canned a trio of threes off Moore’s assists.

Simmons, La Salle’s rangy junior wing, had started fast with nine in the first quarter but went quiet after that and didn’t score in the second quarter or the first seven minutes of the third. He made up for it with a big three to end the third, keeping the Explorers within a score at 44-41.

It was a short-lived reprieve as the Vikings ripped off a 9-2 run to open the final quarter, capped by a driving layup from Moore that gave him exactly 1,000 points for his career and a 53-43 lead with 3:40 to play. Moore, who played two years at Cheltenham and one year at Bishop McDevitt before the school’s closure led him to Wood for his senior year, had to balance the accomplishment with the empty feeling of leaving the gym with a loss.

“It’s a real nice accomplishment, a lot of people don’t even get to score 1,000 points but I don’t want it to be my biggest accomplishment,” Moore said. “I want to be on top at the end of the season.”

In some instances, a loss can be better than a win and with Wood pulling off a few narrow wins so far this PCL campaign that may have masked some areas of need, Moore figured Friday could be one of those cases.

From there, La Salle just started fighting in what would be a decisive 25-17 quarter. Brown tipped off the game-altering run with another traditional three-point play, Ryan Sorge hit a big three and Simmons converted a tough midrange shot to slice Wood’s lead all the way down to a single point.

After a Vikings turnover, it was Varano’s turn to write himself into the rivalry narrative. Shields passed up an open look at a three to find the senior in the corner and the Army recruit was not letting the ball out of his hands unless it was going toward the net, even with a defender flying toward him.

With 37.7 left, the Vikings bench was tagged with a technical foul. Varano stepped to the line and knocked down both.

It was the start of a pretty clutch finish for the senior at the foul line and his one miss in 10 attempts during the quarter would also prove to be a climactic moment. With 16.2 left, and after Wood had ripped off six points in five seconds to pull within 60-59, Varano sank his first and missed the second.

Brown went up and got the ball, getting tied up with a Wood player to force a jump ball with the arrow giving the ball back to the Explorers. In the following moments, Wood’s bench was hit with a second technical and Varano was true on both attempts at the line.

“When I go up there, I’m thinking I’ve practiced for this millions of times; it’s no big deal,” Varano said.