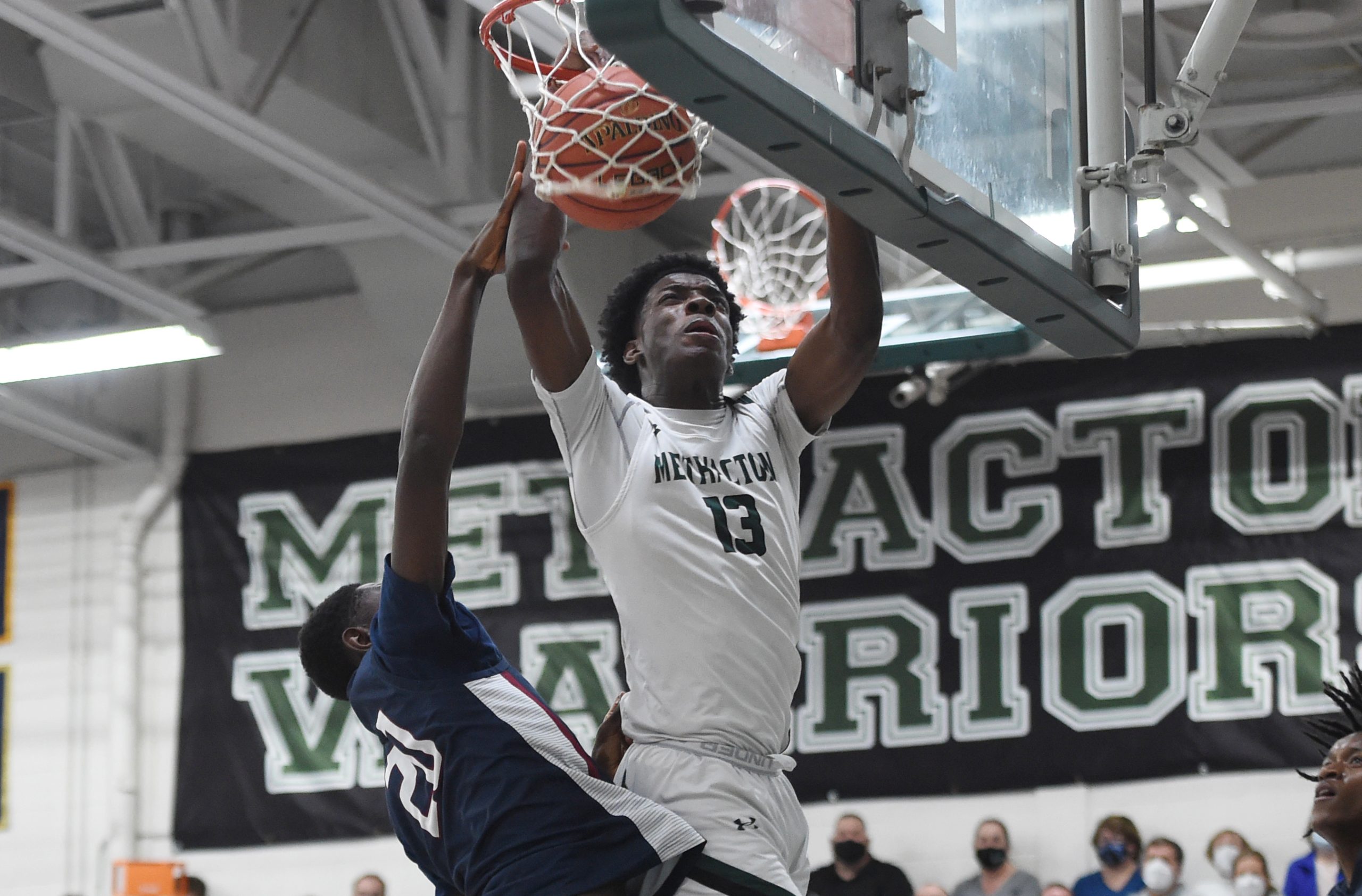 When it comes to the District 1 postseason, the Warriors are pretty good at defending their home court as well.

The presence of 6-foot-8 senior forward Cole Hargrove swatting shots on the back line of the defense is a pretty big reason why both of those statements ring true.

Hargrove couldn’t quite duplicate the 23-point, 21-rebound performance he put together in the Warriors’ district opener last season, but another dominant two-way on both ends Tuesday helped No. 1 Methacton clamp down No. 17 Penn Wood, 56-39, in the District 1 Class 6A second round, for their seventh home playoff win in as many tries in the last four seasons.

.@MHS_BoysBBall seniors Cole Hargrove and Colin Meyer helped the Warriors book a trip to states and the District 1-6A quarterfinals with a win over Penn Wood on Tuesday. pic.twitter.com/uOCGbEaWSj

Along with a number of blocks, Hargrove and senior guard Brett Byrne led the way with 15 points apiece and junior Matt Christian poured in another 13 as for the third time in four seasons the Warriors (23-2) booked a trip to states and the District 1-6A quarterfinals.

“It’s really nice being a senior in this program and leading our team to a district title shot,” Hargrove said. “I hope we just play well.” Methacton’s Matt Christian flashes the 3-point sign to the Warriors’ student section after hitting a three in the third quarter against Penn Wood during a District 1-6A second round game at Methacton on Tuesday night. (Owen McCue – MediaNews Group) Penn Wood’s Anthony Murray (3) dribbles in traffic against Methacton during a District 1-6A second round game at Methacton on Tuesday night. (Owen McCue – MediaNews Group)

Helped by 15 points from sophomore Anthony Murray and 11 from junior forward Mekhi Shillingford, the Patriots (13-7) hung tough with District 1’s top seed, trailing just 11-9 after the first period and 23-16 at half.

The Warriors broke things open late in the third quarter to go up 43-24 after three quarters and cruise to the finish, sending Penn Wood into the District 1-6A playback bracket at Spring-Ford on Friday — winner earns a trip to states.

“They’re impressive on film, but up close I’m very impressed with how they execute,” Penn Wood coach Matt Lindeman said of the Warriors. “All of them from their best player down to their role players were really good tonight.”

“It’s weird and you gotta refocus, but we will and understand that Friday’s like tonight — if you win you’re in,” he added.

In a bit of an offensive rut coming into Tuesday’s game, the Warriors once again relied on their defense early. Hargrove had his way inside with 10-first half points, but Methacton struggled to muster much more until a small surge by Byrne entering the break, which included a buzzer beater to push the Warriors’ advantage to seven at halftime.

The early part of the third quarter was much of the same as both teams grinded for points until a three by Christian with 4:08 left in the period put Methacton up 31-20 and woke the Warriors’ up from their offensive slumber.

“Our defense, it really leads to our offense,” Hargrove said. “And being able to run the break and play fast on stops is going to be key to our success in the playoffs.

Methacton ended the third period on a 15-4 run to go up by 19 heading to the fourth and expanded that lead past 20 points not long after. Christian hit a pair of threes, finishing with eight points in the quarter and Byrne added another seven in the putaway period.

“We just found the open guys and were hitting shots,” Christian said. “It felt really good to see them fall tonight.”

“That’s kind of been the thing, all five guys contribute to the team,” he added. “A lot of times it’s been one or two guys, but I think everyone contributed tonight.” Methacton’s Cam Chilson (15) savese a loose ball in front of Penn Wood’s Sahmir Massenburg during a District 1-6A second round game at Methacton on Tuesday night. (Owen McCue – MediaNews Group) Penn Wood’s Mekhi Shillingford (5) eyes the rim against Methacton during a District 1-6A second round game at Methacton on Tuesday night. (Owen McCue – MediaNews Group)

“”If it was a fight, they punched and we really didn’t punch back there,” Lindeman said. “We didn’t have the same energy level with our defensive effort tonight that we had the other night. Give them credit a little bit for that, but we didn’t play as hard as we need to in this type of game.”

The Warriors have held opponents to 41, 46, 38 and 39 points in their last four District 1 home games, dating back to 2020. Both of their losses this season have taken place away at Spring-Ford and at Wilson.

Good news for Methacton is it will be back at home on Friday with a chance to get the program back to its second semifinal appearance in three seasons.

“The student section really helps,” said senior Colin Meyer, who chipped in five points to the Warriors’ effort. “They’re always here, they’re always loud, and the cheerleaders are good too. Like you said, we’re undefeated on our home floor, so it’s nice.”