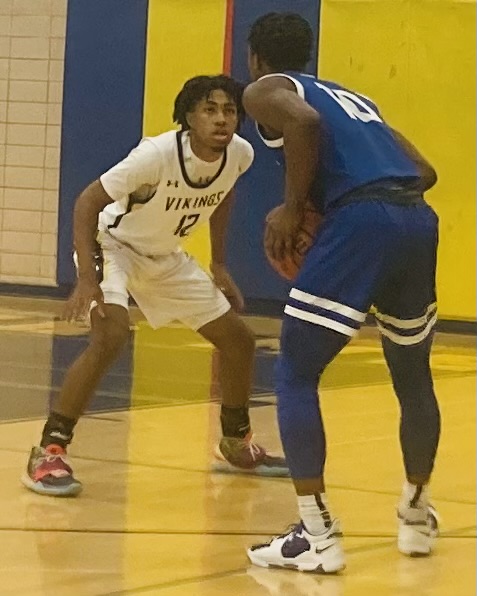 DOWNINGTOWN >> Score one for the District 1 Boys Basketball Power Rankings.

Normally you only hear about it when somebody is complaining, but on Friday, in the opening round of the 5A Playoffs, the rankings were spot on. Sixth seed Bishop Shanahan and No. 11 Upper Merion tangled in a close, taut defensive battle that wasn’t decided until the final seconds.

The host Eagles wound up surviving, 41-38, thanks to some late heroics by 6-foot-4 senior forward Will O’Loughlin, who scored nine of his game-high 20 points in the final 4:39 of regulation. Eleven days earlier, these non-conference foes went toe-to-toe, with visiting Shanahan prevailing by six.

“The first (meeting) was not easy, so I knew this was going to be a battle,” said Eagles’ head coach John Dougherty.

“I knew (Shanahan was) going to be confident heading in, and I knew we were,” added Vikings’ head coach Jason Quenzer. “Maybe it was the familiarity.”

Now 12-11 overall, the Eagles advance to the 5A quarterfinals on Tuesday to take on third-seeded Phoenixville. Upper Merion’s season ends with an 11-12 mark.

“We didn’t play our best, but we played pretty good,” Quenzer said.

There were numerous lead changes, including three in the early going of the fourth quarter. But an old fashioned 3-point play by O’Loughlin and a couple free throws by Anthony D’Addezio gave Shanahan a cushion it would not surrender.

An offensive board and put-back, followed by a defensive rebound and two free throws by O’Loughlin put the Eagles in front 39-33 with 55.1 seconds to go. But Vikings senior forward Kalil Lawson promptly buried a long 3-pointer. Moments later, his teammate Ty Jones was fouled on a 3-point attempt, but he missed one of the three ensuing free throws.

Upper Merion immediately fouled O’Loughlin, and with 3.2 on the clock he made both from the line. With a chance for the Vikings to send it into overtime, Shanahan’s Evan Kapczynski stole the inbound pass to end it.

“We shoot free throws every day in practice, and we do it after a running drill so that we are tired,” said O’Loughlin, who knocked down his final six.

The Vikings opened in a quick and active 2-1-2 zone defense, and it gave Shanahan lots of trouble getting quality shots. The Eagles connected on just one shot from beyond the arc on the evening.

“That was a wrinkle we threw in this week that we really liked,” Quenzer explained. “I knew it would stump (Shanahan) but that they were going to adjust, which good teams do. All of (Shananhan’s) early offense seemed to come off our turnovers or offensive rebounds.”

The Vikings opened a 17-14 halftime lead thanks to an 11-2 run to start the second quarter. The Eagles turned it over seven times and Kalil Lawson and Ty Jones each knocked down 3-pointers in that stretch.

But in the third quarter, Shanahan fared much better against the zone until the final few minutes, when a rash of turnovers helped the Vikings score the last eight and take a 26-25 lead into the final period.

“(Upper Merion) did an awesome job with that zone,” Dougherty said. “They made us work for everything.”

In all, the Eagles turned it over 23 times, but the Shanahan defense forced 21 of its own. Zane Domsohn chipped in with nine points, but nobody else scored more than five. O’Loughlin came close to scoring half of his team’s points.

“Will is one of our leaders,” Dougherty said. “Whatever he does, I am not surprised. I expect that from him, and so does Will.”

Lawson and Jones combined to score 30 points for Upper Merion, and all but two points came in the final three quarters. The rest of the team managed just three buckets.

“Those are guys with four years of experience,” Quenzer said. “They’ve been doing it all season and you lean on guys like that.”