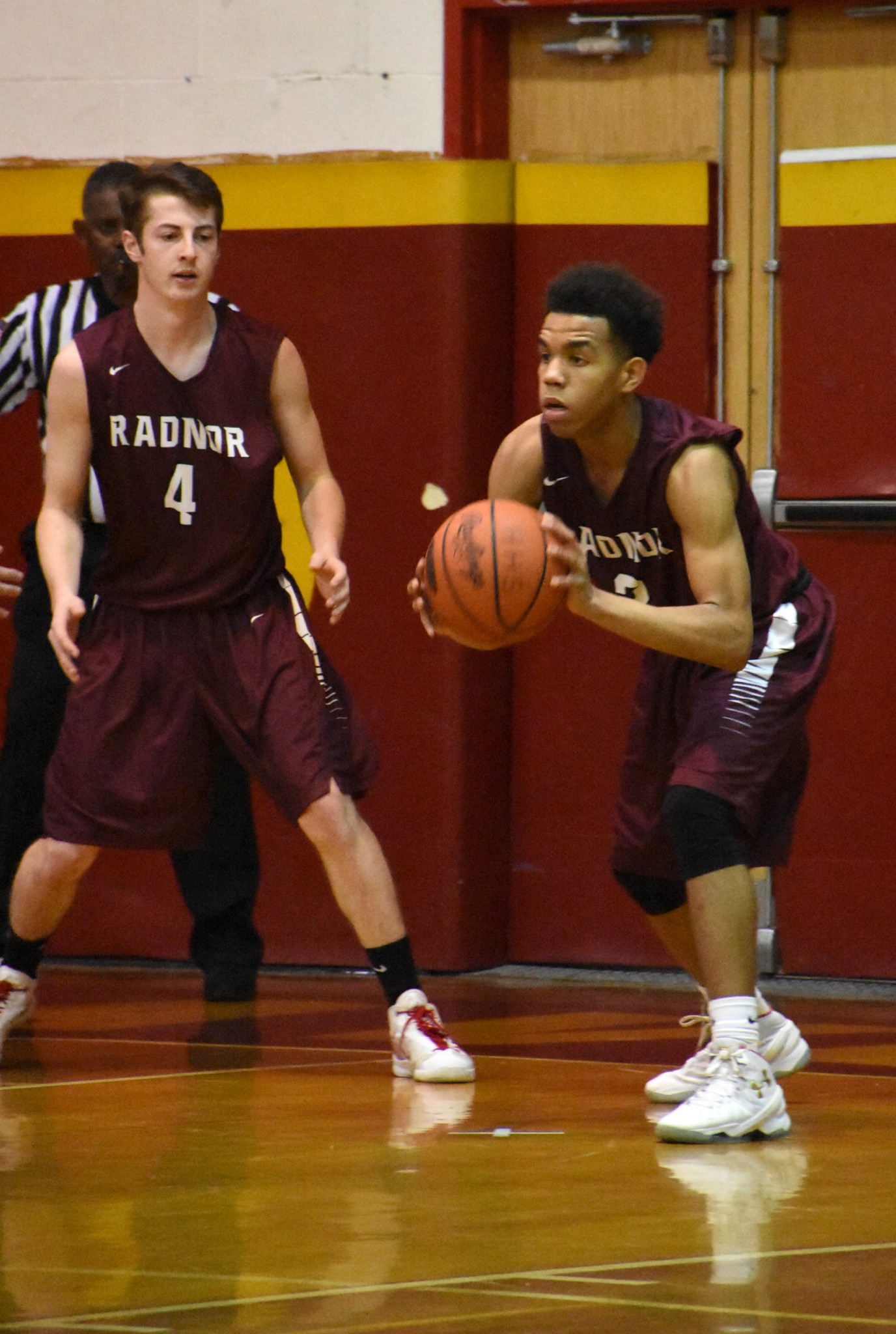 Against Haverford, the Raiders needed to be more aggressive. And with Ressler regularly attended to by defenders four or five inches shorter, the senior forward would have to lead the way.

Ressler responded with 14 of his 16 points in the second half as the Raiders came from behind for a 46-40 win over Haverford.

“I try to be as aggressive as I can and try to get shots for my teammates and look to score when I can,” Ressler said. “But I really try to use my matchup.”

He and the rest of his Radnor teammates endured a sleepy first half, staggered by an 11-2 run by the Fords out of the gates. The Fords led by nine with 2 minutes, 51 seconds left in the half and by five at the break, only that close when Jack Thompson was shoved on a desperation half-court heave with 0.1 seconds showing and made two free throws.

The manageable 25-20 deficit eased the locker-room commiserations, but Ressler and company knew something needed to change drastically.

“We just wanted to come out, make sure we were finishing every possession,” Ressler said. “That’s one thing we always talk about. First half, they had a bunch of (offensive) boards and we were turning the ball over. We didn’t want to give them extra shots. We wanted to make sure we got a shot every time and try to limit some of their easy opportunities.”

Radnor (6-10, 2-8 Central League) put the clamps on defensively, forcing nine third-quarter Haverford turnovers and 16 in the game while coughing up the ball just twice after half. They nudged ahead for good on a pair of Sami Ghazzi free throws with 15.8 seconds left in the third.

The start authored by Haverford (1-14, 0-10) was uncharacteristically prolific for a team that averages 36.5 points per game. They had 13 in five minutes Friday, nine from forward J.T. Smyth. Fresh off a career-high 16 points Wednesday against Lower Merion — his first double-figures game — Smyth added 14 Friday. He canned a pair of 3-pointers and aggressively drove to the basket early.

“We were talking about intensity before the game,” Smyth said. “We came out, we had it and everyone was on. I haven’t been playing too good this year, but I finally started picking it up.”

Smyth wasn’t the only option working in the first half. Trey Blair (10 points, nine rebounds) helped tip the battle on the boards early. They moved the ball adeptly via Dan Roe, who dished four assists on a tough shooting night. And Luke Verzella came off the bench to provide a boost of eight points.

You can’t stop JT Smyth, you can only hope to contain him. He has 9 pts. Haverford up 11-2 on Radnor. pic.twitter.com/mIQpYWPEPJ

But the Fords haven’t had a ton of experience playing with leads, and it showed with four consecutive turnovers to start the second half (though a Blair triple stemmed the tide).

“In the first half, we had a ton of intensity,” Smyth said. “We were on the floor and everything, we were hitting our shots. And we came out in the second half and didn’t have it like the first half.”

That allowed Radnor to get in gear. They struggled mightily from 3-point range, hitting four of 17 attempts. But Thompson dished to Ressler on the opening trip of the fourth quarter for a triple that stretched the edge to five. A Ghazzi trifecta with 3:48 to play restored a four-point bump that Ressler backed with a 5-for-8 effort at the line, plus nine rebounds.

Jack Thompson up and under. And we’re tied at 28 pic.twitter.com/EKj2fvcjFZ

Ghazzi got to 10 points, and Thompson added seven. That was just enough for a Raiders’ team that has scuffled late in games, toting a 3-6 record in games decided by 10 points or less before Friday.

“We’ve had a lot of games that came down the stretch, but we’ve been in every game,” Ressler said. “A lot of our losses, we could’ve won. We know we can play with anyone, and it comes down to making plays really.”

Ridley 54, Springfield 43 >> Damir Fleming tallied 23 points, and Jimmy Bramwell supplied all 11 of his in the third quarter as Ridley held the Cougars to three fourth-quarter points.