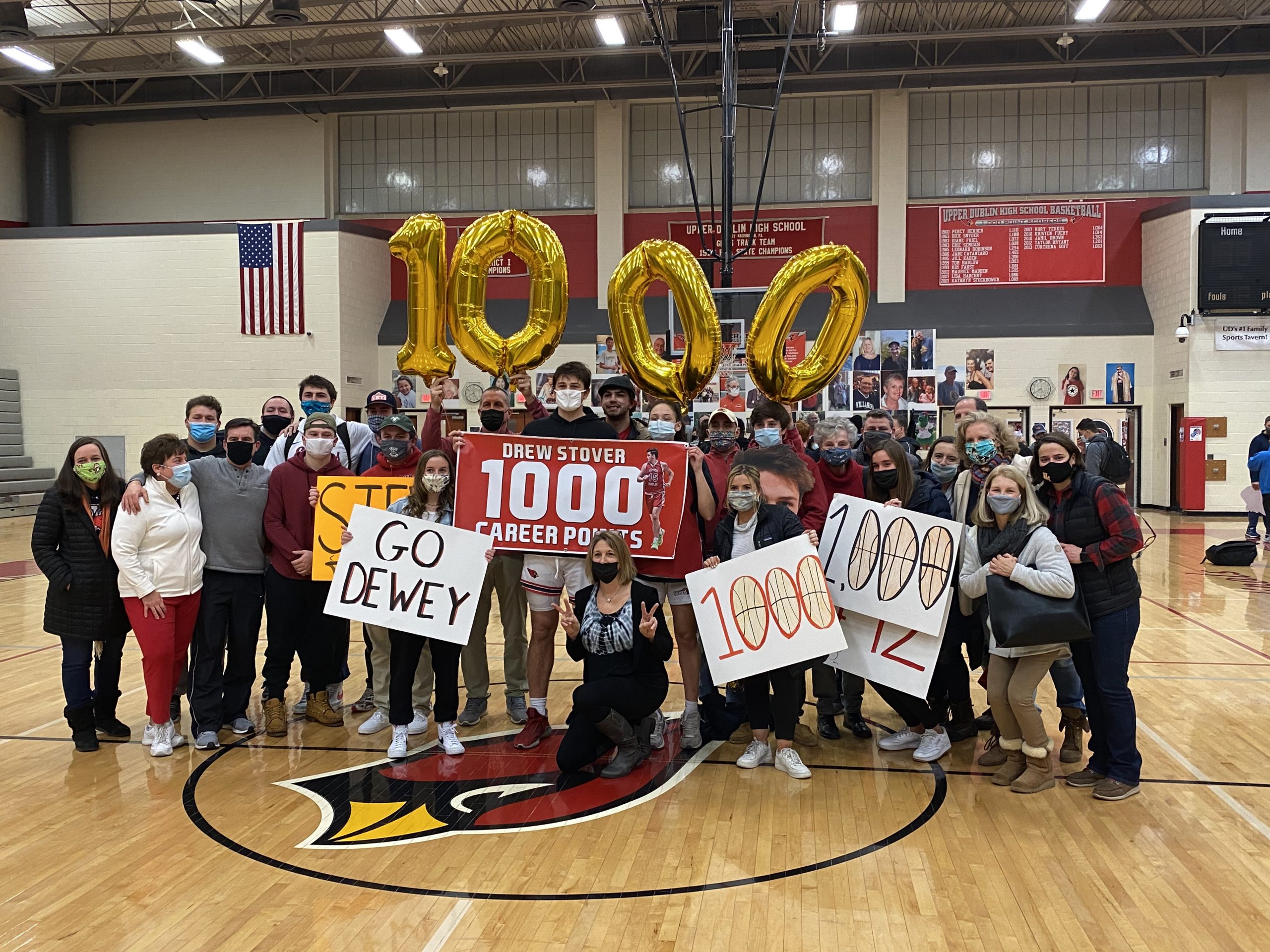 Upper Dublin's Drew Stover takes a picture with family and friends to celebrate scoring his 1,000th career point in the Cardinals' win over Hatboro-Horsham on Thursday, Feb. 11, 2021. (Mike Cabrey/MediaNews Group)

The 2021 boys basketball season was unlike any other in The Reporter/Times Herald/Montgomery Media area.

Games didn’t start until January. Players wore masks on the court and stayed six feet away from teammates on the bench. Stands were empty aside from a handful of family members and friends.

Archbishop Wood won the Philadelphia Catholic League and District 12-6A championships. A one-point loss in the state final against Reading kept the Vikings from completing an undefeated season.

Archbishop Carroll represented the PCL with a District 12-4A championship and state quarterfinals appearance.

Cheltenham and Plymouth Whitemarsh each won Suburban One League championships. The Panthers went 9-1 to win the Freedom Division while the Colonials finished 9-1 atop the Liberty Division.

Abington finished second in the Liberty Division, but made a run to the District 1-6A championship game. The Ghosts entered the playoffs as the No. 14 seed before winning four games, including victories over No. 3 Plymouth Whitemarsh, No. 6 West Chester East and No. 7 Central Bucks East. Their season ended in the district final against Lower Merion.

While these are all team accomplishments, there were plenty of outstanding individual players that deserve credit. The top players from this season are recognized as members of the 2021 The Reporter/Times Herald/Montgomery Media All-Area Teams.

Marcus Randolph, Sr., Archbishop Wood >> Randolph played a key role in the Vikings historic season. In the PCL title game, the 6-foot-4 guard scored 14 of his 18 points in the second half to help Wood hold off Roman Catholic. In the state semifinals, he scored 13 of his team-high 24 points in the fourth quarter of a four-point win over Lower Merion. The Richmond commit led the Vikings in scoring with 16.6 points per game.

Josh Jones, Sr., North Penn >> Despite only playing two years of high school basketball, Jones made his mark on the North Penn program. The Louisville soccer commit scored 734 career points and helped the Knights reach the state playoffs as a junior and led them to the District 1-6A quarterfinals as a senior. Jones averaged 21.3 points and 7.6 rebounds per game this winter.

Drew Stover, Sr., Upper Dublin >> The 6-foot-7 senior had the attention of every team Upper Dublin faced and still averaged 24.9 points and 10.6 rebounds per game. Stover’s signature performance came at the end of the regular season when he scored 43 points in a 73-67 win over North Penn to help the Cardinals secure a District 1-6A playoff spot. The Millersville commit scored his 1,000th point in February.