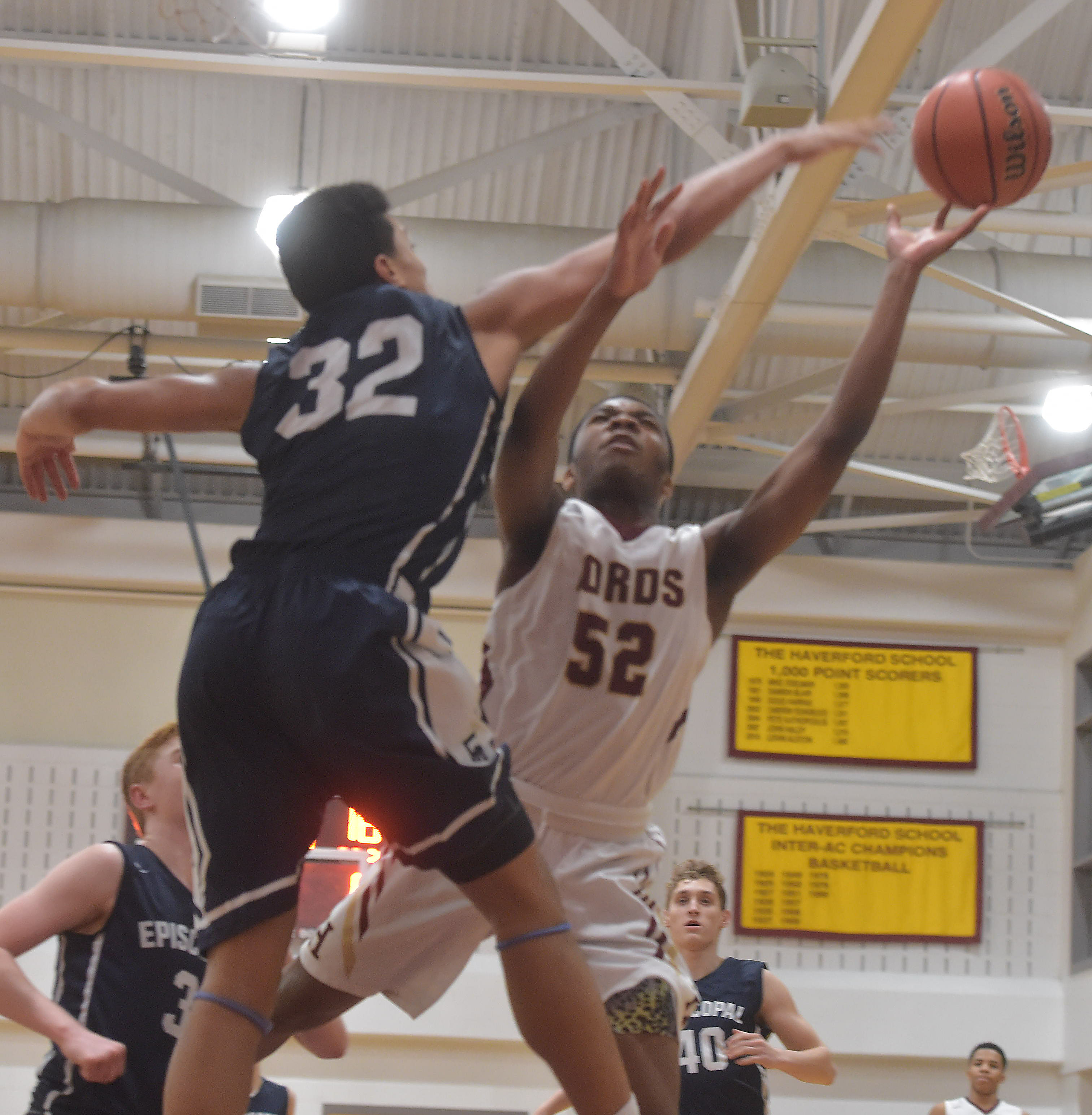 HAVERFORD >> When Haverford School’s Christian Ray saw the Inter-Ac League schedule for the first time, his eyes fell to Week 1.

In a span of four days, the Fords and their robust title aspirations would get a shot at both of last season’s co-champions. Ray, a junior forward, rose to the occasion Tuesday in a 14-point victory at Germantown Academy. And he had no intention of allowing Friday’s shot at rivalry-laced vengeance pass without similar devotion.

Ray poured in 16 points by halftime as the only reliable font of offense for either side, finishing with 21 points and 11 rebounds in a 65-40 dispatching of Episcopal Academy in a foul-strewn quagmire. Christian Ray of Haverford School drives toward the basket while Episcopal Academy’s Justin Hershey defends in the second quarter Friday in a game won by the Fords. (Digital First Media/Pete Bannan)

While it wasn’t easy on the eyes, it’s the misshapen brick of an effort that paves the road to titles. When Ray factored in the tinge of revenge — Episcopal beat Haverford on its home floor last year to secure the inside line at a title shot and deny the Fords theirs — there was no doubt he’d be ready.

“For me and I know for a lot of people on the team, we remember last year, being here at home, Inter-Ac on the line, and we remember the feeling of losing, feeling defeat and everyone (from the EA student section) running on the court,” Ray said. “So this whole offseason has been, ‘we need to beat them, we need to beat them.’ So I came out and knew I had to provide the spark.”

EA had 17 points at the break, or one more than Ray had. Both had five made field goals. But Ray’s influence wasn’t limited to hitting shots … as in the third quarter, in which he didn’t attempt a shot yet the Fords (11-4, 2-0 Inter-Ac) expanded their cushion.

Ray’s presence in the lane cleared room for Asim Richards and Jameer Nelson, who scored six points each, the latter before leaving with a frightful injury where he was helped off the court unable to put weight on his left leg. Ray’s kick-out game created room for Kharon Randolph to hit two 3-pointers in the first quarter, then Ray deferred to the senior point guard for Randolph to hit nine of 10 free throws in the fourth and maintain the Fords’ edge even as the game ground to a glacial pace.

“I think one thing I like about my game is that I don’t need to score to affect the game, in my opinion,” Ray said. “Kharon was hot, Asim was getting to the basket, so I just let them do what they did and I facilitated and let them get their open shots.”

Jameer Nelson Jr the deuce on an inbounds from Gavin Burke. Fords up 9 pic.twitter.com/UCB0DEMiNY

Randolph, who was feted pregame for scoring his 1,000th career point Dec. 22, tallied 21 points. Ten Fords scored, the same number as were whistled for fouls in an interminable slog featuring 50 personal fouls.

Ray’s ascendency owed in part to two quick — as in the first 36 seconds — fouls on Jack O’Reilly, which left the lane rife for exploitation. That defensive matchup was one aspect in which EA’s supporting cast didn’t step up as needed.

The high-powered duo of Alex Capitano and Matt Dade was muted, in equal measures by an early Fords’ 3-2 zone defense and physicality in the lane that favored the longer hosts. Capitano scored 13 points and Dade added 11. But collectively, they were 7-for-25 from the field and came up empty on five attempts behind the 3-point line.

Others picked up the slack. Jack Fitzpatrick and Colin Chambers briefly sparked the Churchmen by hitting two 3-pointers each, but it wasn’t consistently enough. EA (8-9, 0-2) languished with just 26 points through three periods. Haverford School’s Kharon Randolph goes to the basket in the first half against Episcopal. (Digital First Media/Pete Bannan)

By the time Ray had finished his post-game interview, he had seemingly turned a page in his mind. The Fords were here last year, sitting 5-0 in the league and in the catbird’s seat, before a 2-3 finish in the league (and 3-6 overall) cost them a piece of a first league title since 1999.

Ray has no intention of seeing that script repeat.

“It’s the first two, but we’re not going to get too far ahead of ourselves,” he said. “It’s two out of (10 games). We started out 5-0 last year. We have to stay within ourselves, be happy with these but not get too excited and keep our mind focused on next Tuesday.”

Archbishop Carroll 57, La Salle 54 >> AJ Hoggard led all scorers with 20 points, and Justin Anderson and Keyon Butler provided 13 apiece as the Patriots (7-4, 1-1) scored a huge league victory away from home.

Haverford 71, Harriton 59 >> The Fords exploded on offense, their highest output since the first game of the 2013-14 season, paced by 16 points from John Seidman, who hit 3-pointers on three consecutive possessions at one juncture in the first half. JT Smyth added 14 points, and Luke Verzella, Danny Roe and Canaan Curry poured in nine each.

Springfield vs. Conestoga >> Moisture on the court forced a postponement of the game to a date still to be determined.

Math, Civics and Science 80, Chichester 60 >> DaQuan Granberry posted a double-double of 22 points and 11 rebounds, and James Hendricks scored 14 points before leaving with an injury as the banged up Eagles (7-4) fell.