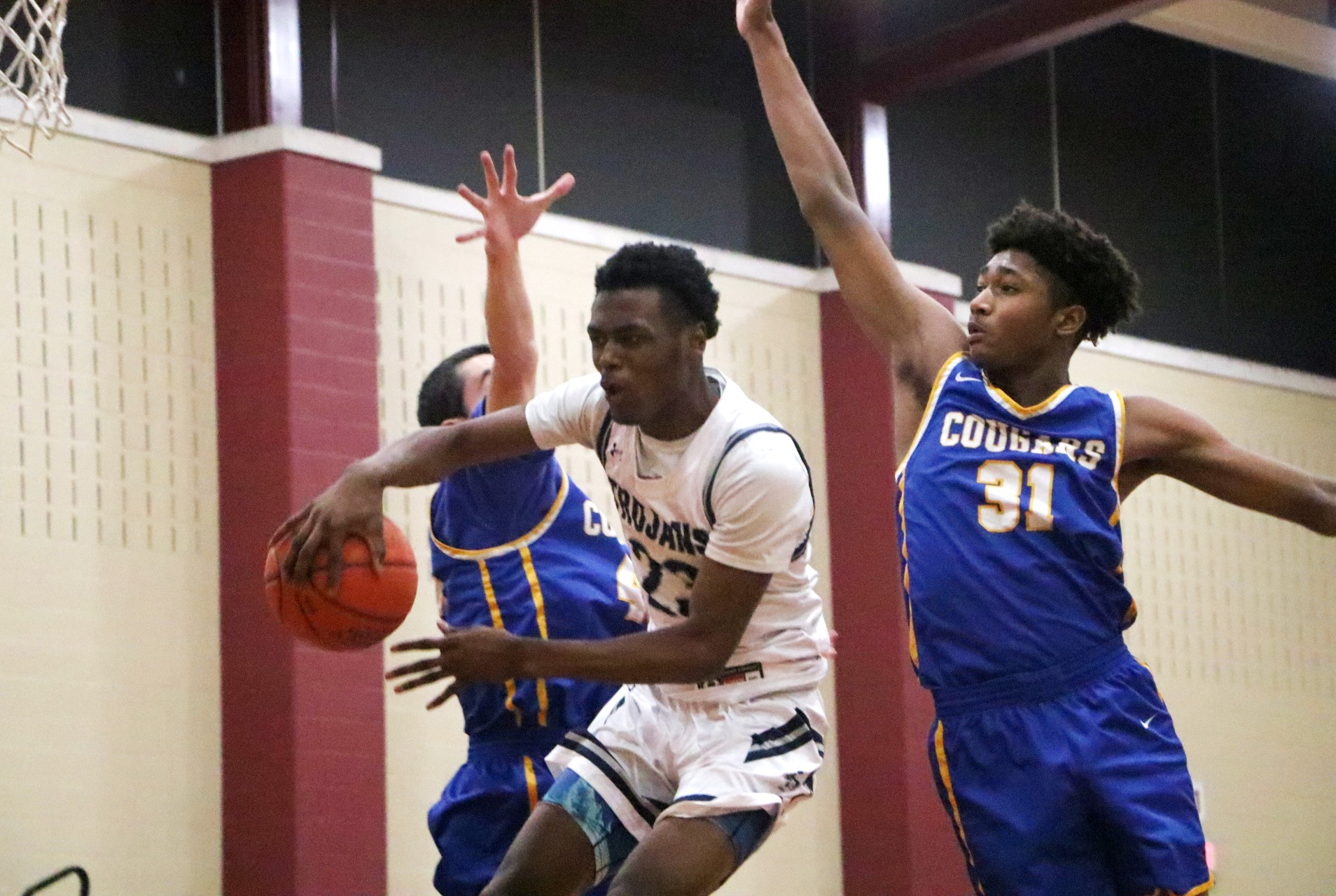 LOWER POTTSGROVE >> Pottstown had about five or six practices before the start of the boys basketball season where every member of the team was together. But on opening night at the Pottsgrove Falcons Invitational, everyone showed up.

The Trojans took a lead in the first quarter and never looked back, taking a 67-52 win over Downingtown East to kick off their 2022-23 campaign at Pottsgrove High School on Friday.

Q2, 1:30 — Sadeeq Jackson finishes in traffic and he’s up to a game-high 11 points. pic.twitter.com/rJPwt9EAQM

Four different players provided a 3-point shot in the first half as the Trojans attacked the perimeter. Jullian Beasley (eight points) drained a shot from beyond the arc at the buzzer to take a 33-23 lead into halftime.

Connor Shanahan — who averaged a Ches-Mont League-high 28 points per game last winter — put up 15 points for the Cougars (0-1).

Micah Hill-Benitez padded Downingtown East’s offense with 17 points as he and Shanahan provided muscle for the Cougars.

“It gives us a lot of potential,” Downingtown East coach Brian Grashof said on his one-two punch in Shanahan and Hill-Benitez. “I think Conner got banged up and missed some shots he usually makes so that hurt. Micah over the summer has just become more of an offensive weapon.

“He’s 6-4, he can jump, he can rebound, he has a motor when he plays and he can dunk, hit the three and play defense guarding one-through-five,” Grashof said. Hill-Benitez showed off that growth as an offensive talent with a one-handed dunk with six minutes left in the game.

By then though Pottstown was throwing everything at the wall and seeing what stuck. The Trojans forced turnovers, created transition offense and got more aggressive in the paint on late possessions.

“That’s how we play together. We got out there and just played together,” Abdul Jackson said. “I say if you play as a team against anybody and you play the right way, the chances are higher to win no matter who you got. They can be a better team, but if you play together, you can win.”

Pottstown graduated its scoring leader in Gage Sibley, who averaged 15.1 ppg — third in the Pioneer Athletic Conference last season. One of the questions for the Trojans heading into the winter was how they would replace that production.

On Friday, the answer was by dividing it up and letting everyone eat. But it wasn’t all sunshine and sparkles for a Pottstown team that won so decisively.

“We just have to try and get better. We had 11 turnovers, we have to limit that,” Elliot-Moore said. “We had six rebounds in the first half, then we had 13 in the second half, so we just try to get better every step of the way. Better passes, better defense, more talking, more hustle and make the right passes and the right plays.”

Sadeeq Jackson goes coast to coast following a turnover on the first possession of the half. He’s up to 15. pic.twitter.com/XIAub9zmfN

The last three years have seen Pottstown go .500 or lower in the PAC Frontier. In Ken Ivory’s second year at the helm of the program, he aims to get the ship on the right path, and that starts in the locker room.

With a solid showing on opening night, the Trojans’ offense looked more spread out than it has in the past couple seasons, opening some eyes at Pottsgrove.

“I think now, we might have their attention. We told them that this kind of win was possible,” Ivory said. “The sky’s the limit so long as we can grow and continue to pick up things as we go.”