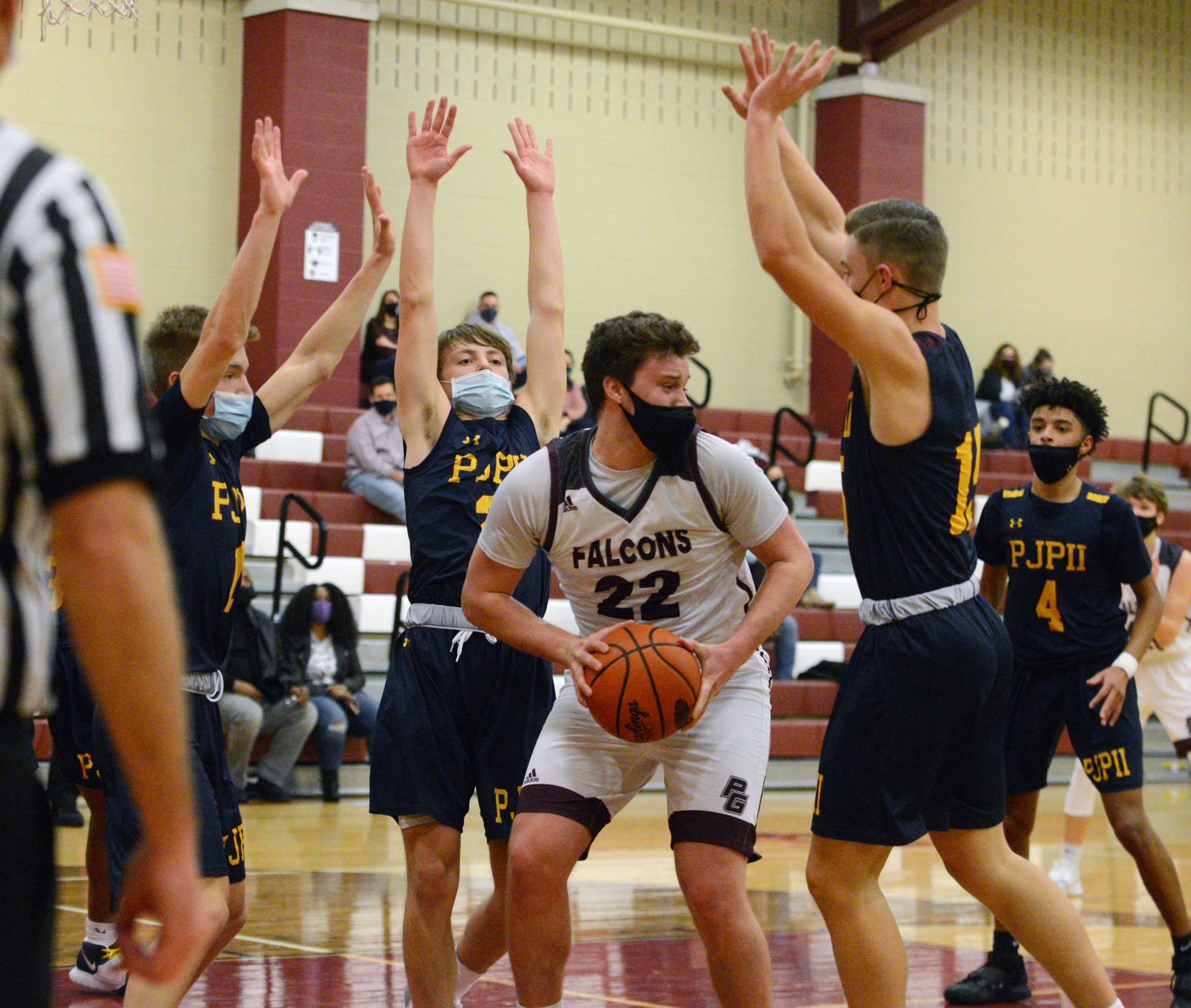 SANATOGA >> The Pope John Paul II boys basketball team thought it would be playing three days later when it walked off the court after an exciting PIAA Class 4A tournament win over Allentown Central Catholic last March.

Rather than lacing up for their state quarterfinal matchup against Tamaqua, the Golden Panthers’ state playoff run unceremoniously ended when the COVID-19 pandemic forced the cancellation of the winter sports championships.

Ten months after it last took the court, PJP picked up right where it left off Friday against Pottsgrove, opening its 2021 season with a 58-37 Pioneer Athletic Conference Frontier Division win.

“Last year ended on a bad note,” McCarthy said. “We don’t know how many opportunities we’re going to get this year, so every night you just have to give it your all. I know Pottsgrove gave it their all. They’re a good team and we’re just happy we came out with the win.”

McCarthy and Baron combined for 22 first-half points, including all 15 PJP points in the second quarter to help the Golden Panthers build a 30-17 halftime lead. Green and Workman helped PJP pull away down the stretch with a combined 17 fourth-quarter points. The quartet also combined for 12 threes in the game.

A defining trait of the Golden Panthers’ PIAA quarterfinal and District 1-4A championships team a season ago was the group’s balance with five players averaging eight or more points per game.

Green, Workman and McCarthy were all part of that group a season ago. Without leading scorer Drew McKeon, who graduated last spring, and first team All-Area forward Justin Green, who missed Friday’s game with an ankle injury, Baron, a reserve during last year’s playoff run, demonstrated he’s ready to rise to the occasion this season.

“I was getting more confident,” said Baron, who knocked down four threes in Friday’s win. “I definitely like playing with these guys in practice, and I’m definitely getting more comfortable with the team getting to know everyone to the best of my ability and just getting out there. I got really comfortable and started making shots.”

Pope John Paul II’s J.P. Baron (15) reaches out to save a ball going out of bounds over Pottsgrove’s Luke Kaiser (22) on Friday. (Owen McCue – MediaNews Group)

Coming off a two-win season in 2019-20, Pottsgrove showed it won’t be an easy out in the league this season, hanging with PJP through the middle of the fourth when Green and Workman helped the Golden Panthers pull away.

Kaiser scored eight of his 16 points in the third quarter, bringing the Falcons within seven, 32-25, with a personal 6-0 run early in the period. Zion Dyches, who followed Kaiser with nine points, hit an acrobatic shot at the buzzer to make it a 39-31 game heading to the fourth.

“I thought that showed resilience, which is really what you’re looking for on a team that’s young and looking to build an identity to kind of build on that. … A year ago, I don’t know if we respond in the fashion that we did tonight.”

Like PJP, the Falcons also return a large group from last year’s squad. Kaiser, Dyches and fellow seniors Nick Stringer and James Thompson were four of the team’s top five scorers a season ago, all averaging 5.5 points per game or more.

“We’ve been playing together since seventh or eight grade, so we have pretty good chemistry I would say,” said Stringer, who had five points.“We played really well tonight. We played like a team. … I don’t think we set any goals yet, but I think we’ll be better this year.”

In commenting on his team’s performance, Flanagan noted that the Golden Panthers are not just the favorites in the Frontier this season, but quite possibly the PAC in general — a fair assessment for last year’s league runner-ups and back-to-back division champs.

Though the Golden Panthers have achievable ambitions both in the league and in the postseason, the abrupt ending to last season also has them taking an altered focus to the 2021 campaign.

“We just gotta take it one game at a time,” McCarthy said. “This year’s crazy, so you never know what’s going to happen. We know we got a target on our back this year, especially on this side of the division. We’re just going to come out and have fun every night, have fun as long as it lasts.”

NOTES >> During Friday’s game, some of the notable differences in ‘COVID-era basketball’ were both teams wore masks throughout and balls being sanitized during stoppages. Pottsgrove players and cheerleaders were allowed two spectators each, providing a little bit of a crowd. “It was weird. It was different, very different,” Stringer said. “It was good to be out there under the circumstances. It was good as it could be for a loss.” … Flanagan thanked all those responsible for helping the Falcons be able to play this season, in particular all those at the high school putting in extra time and efforts to ensure COVID safety protocols are put in place and being followed. “It’s everybody here that we’re appreciative of and the easiest way to show that is playing hard and giving the effort like we did tonight,” Flanagan said.