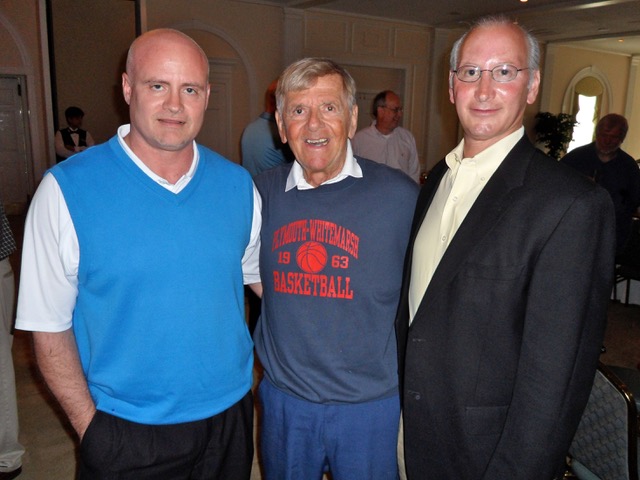 The success of the Plymouth Whitemarsh boys basketball program began with Hank Stofko.

“He built the foundation,” said former PW coach Al Angelos. “And I said many times in my seven years there that anybody that knows anything about Plymouth Whitemarsh basketball know that he laid everything. It was his house, his baby.”

Stofko, who coached the Colonials for over three decades, leading the team to 583 wins and the 1963 PIAA championship, died Sunday. He was 93.

“I was talking to Jimmy Moore, who was also on Mr. Stofko’s ’63 state championship team, and I said to him, you know they’re tearing down a lot of statues these days, if there’s ever a person that should have a statue built and erected in his honor it’s Mr. Stofko,” said Angelos, who took over as Colonials head coach when Stofko retired in 1991. “Because of all the lives that he helped and how he inspired all of us through his work ethic and his convivial spirit.

“He was such a beautiful, beautiful guy, he was really spectacular. We’re all indebted to know him, very lucky to have had him in our lives.”

Per a post on the Facebook group “Vintage PWHS Boys Basketball” announcing Stofko’s passing, “As per Coach Stofko’s wishes, there will be no obituary or funeral.”

“I inherited Al Angelos and he inherited from Coach Stofko and the goal was you must maintain, in your mind you must maintain an excellent standard,” said Jim Donofrio, who has coached PW since 1998. “And that’s the legacy he’s left, so I think it’s very special.”

Angelos said he met Stofko in ninth grade and last saw him March 7. And despite losing his vision due to macular degeneration, Stofko — who Angelos said was “always very well read — he read the newspapers every day but couldn’t for the past year or so,” — was still well versed in the latest sports news.

“I don’t know how he got his news information but in that conversation he knew about Kobe Bryant’s death, he knew that Villanova — he was so happy that Villanova was turning their season around and they were challenging again and he talked about the Phillies acquiring a pitcher I guess it was Zack Wheeler I’m not sure,” said Angelos, a 1976 PW grad who played for Stofko. “I walked out of that and I thought, ‘How is he getting his information?’ because he always read everything. And I knew he couldn’t see. So once again he amazed me as he did for all those years. He was one of the most, if not the most influential person in my life for sure.”

“He once told me that you don’t really have to know a lot about the sport to coach, you need to know a lot about people and he sure did, he actually knew about both,” Angelos said. “He was easily the best coach that we had in Pennsylvania I think for sure. He was, forgetting the wins and losses, he was just brilliant with how he approached the game — he didn’t have a set formula, he would change the offense and defense per year per the talent on the team per the strengths on the team and he would try to manipulate that in a manner where mentally you were stronger than the opponent.”

Stofko’s 1963 team won the first of Plymouth Whitemarsh’s three PIAA championships, the Colonials that year going 24-0, PW capping its perfect run with a win over District 7’s Norwin 74-54 in the Class AAA state final at the Farm Show Arena in Harrisburg.

Stofko led the Colonials back to the state 3A final the following season, the repeat denied by District 7 side Uniontown 62-51 in Harrisburg as PW finished the year 24-2.

“He was always very interested in his former players and he always mentioned his state championship team which had to be special to him,” Angelos said. “I know it was and the accomplishments of those guys and how proud he was. John Pergine, for example, went on to play in the NFL and he mentioned all the time how much he meant to Plymouth Whitemarsh, how much Johnny meant to Plymouth Whitemarsh and how much all of those guys did.”

One thing that stuck out about Stofko’s coaching for Angelos was what he described as “about a 20-minute monologue,” at the start of practices.

“We would be sitting there and he would walk up and down and he’d kind of say something about everybody or almost everybody every day,” Angelos said. “And sometimes it was harsh and sometimes it wasn’t but every day that’s how we started practice and every day you’d wonder what he wanted from you that day by what he said in the beginning of practice.

“And I believed he had that all planned, that’s how deeply he thought about what he wanted to accomplish and how he wanted to formulate his team and it was to get the most out of each individual for the team’s betterment.”

“He was revered with a lot of other great high school coaches of that time,” Donofrio said. “But what he did, close to 700 wins when you add all those other years up in totality. So I don’t know if that gives, outside of Speedy (Morris) and there’s (Dan) Dougherty I think at Episcopal (Academy), he’s in that class, of — wow, that’s a passion, that many years.”

Stofko was inducted into the Montgomery County Coaches Hall of Fame’s inaugural class in 2002.

“In the last couple of years he was very private, but if I would get a conversation with him on the phone and not see him at all for a whole season, you would be amazed at how he knew exactly what was going on with the team,” Donofrio said. “Cause he had so many former players that would fill him in and he’d get a hold of the papers that he would surmise what was going on with my team. And we would talk for two-and-a-half hours. And he loved — he just absolutely loved it.”