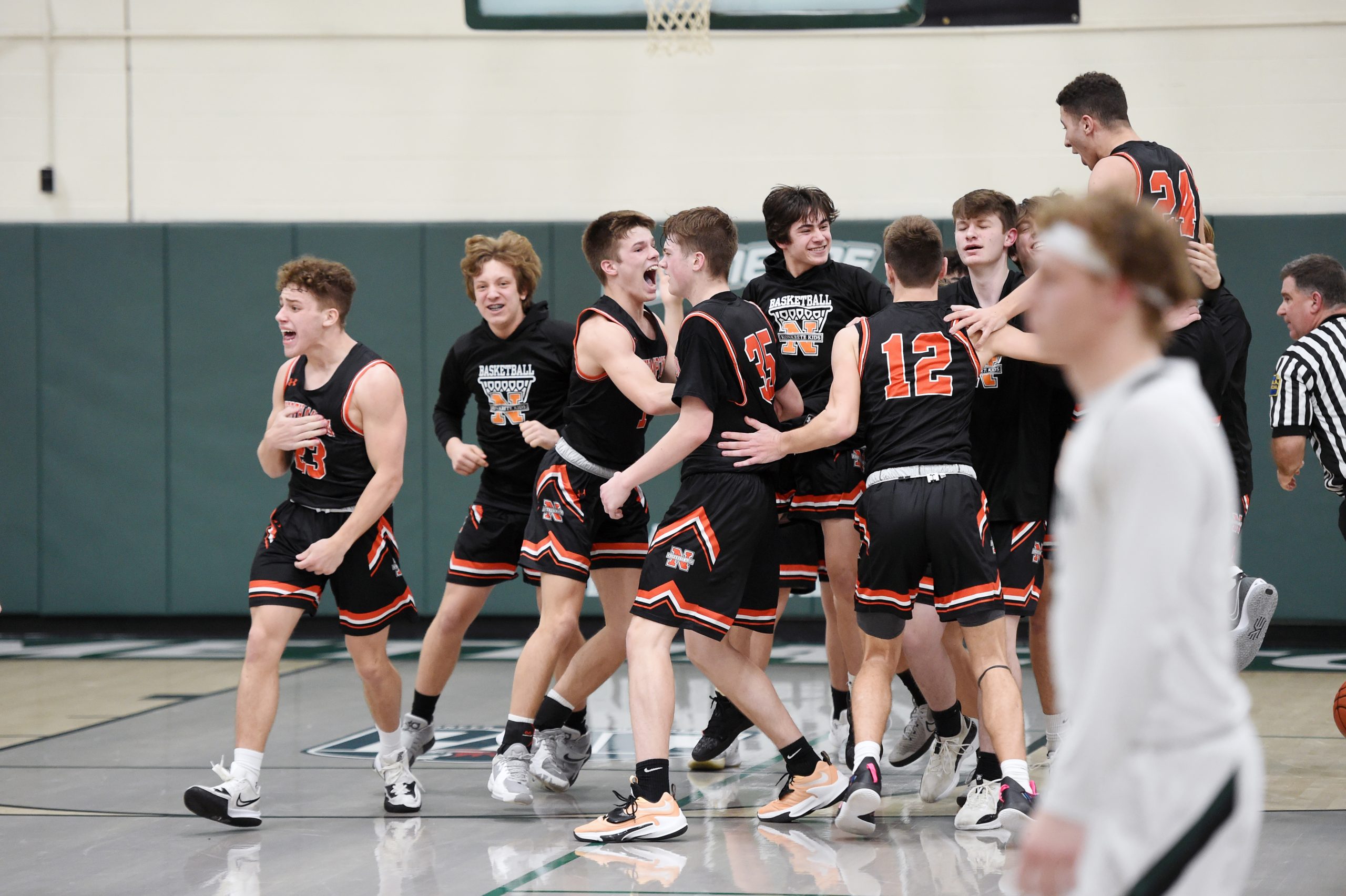 FAIRVIEW VILLAGE >> The Methacton boys basketball team had about a minute to extend its season after an and-one by Northampton’s Lucas Lesko put the Warriors down by one in overtime of Tuesday’s PIAA Class 6A first round game.

They needed one shot to go in, but they never got the shot up.

Northampton forced two turnovers in the final seconds of the extra period, a steal by Isaiah Harris clinching a 50-49 overtime win for the Konkrete Kids to advance to Saturday’s second round and ending the Warriors’ season.

The loss concludes an impressive four-year stretch for the Warriors (24-5) that included three state playoff appearances.

“I told the guys in the locker room there’s no words right now that are going to change the feelings you’re having,” Methacton coach Pat Lockard said. “But when the dust settles and you get a little distance away from this time period, you’re going to see the success that you had, particularly that senior group.”

Methacton led 25-15 at halftime and all signs pointed to the Warriors extending their season into the second round of the PIAA postseason for the third time in four seasons.

Northampton trimmed the deficit to 35-31 by the end of the third, and helped by a pair of threes by Lesko, who had 20 of his points after halftime, the Konkrete kids were within one, 43-42, with three minutes left.

“We just didn’t execute in the second half,” Hargrove said. “We had some defensive lapses that just can’t happen in state games like this.”

Lesko tied the score 44-44 on a bucket inside with a minute to go. The Warriors turned the ball over with 17.8 seconds to go and an open corner three by Northampton senior Caden Reph was no good at the regulation buzzer.

“To be honest we were getting some good shots in the beginning, shots just weren’t falling,” Lesko said of the Northampton comeback. “All throughout the half I’m going around telling guys, ‘My shots aren’t falling. No one else’s are. We just gotta come out, start shooting the shots with confidence and they’re going to go in.’”

Reph and Christian exchanged threes to start the overtime period. Byrne put Methacton ahead by two with a tough bucket inside, but Lesko’s and-one with 1:09 to play gave Northampton back the lead.

The Warriors couldn’t find a good look before a timeout to prevent a near turnover with 9.3 seconds to play. They coughed the ball up on the ensuing inbounds with 7.4 seconds left before the Konkrete Kids gave it right back with 6.7 ticks remaining.

After a corner trap near the halfcourt line, Isaiah Harris picked off a pass and dribbled toward the other end of the court until the final buzzer sounded.

“It was awesome Isaiah making that hustle play,” Lesko said. “It felt really good just to see him go out there and make another hustle play like we’ve been making, just big time steals. I love to see those things.”

The loss signaled a disappointing end of an impressive four-year run for Methacton and its senior class of Hargrove, Byrne, Colin Meyer, Matt Blakemore and Dan Brandi.

Methacton finished its 2022 campaign with three straight losses, falling in the District 1-6A semifinals to Norristown, the third place game against Cheltenham and dropping their state opener on Wednesday night.

But before that came an 18-0 start and a Pioneer Athletic Conference championship for the senior group.

Byrne and Hargrove were both in rotation for the 2020 team that won the program’s first District 1-6A championship and carried the torch to get this group back in a similar position.

“It definitely was a challenge we both had to accept and I think this year ultimately for the most part until the end we really accomplished that,” Byrne said.