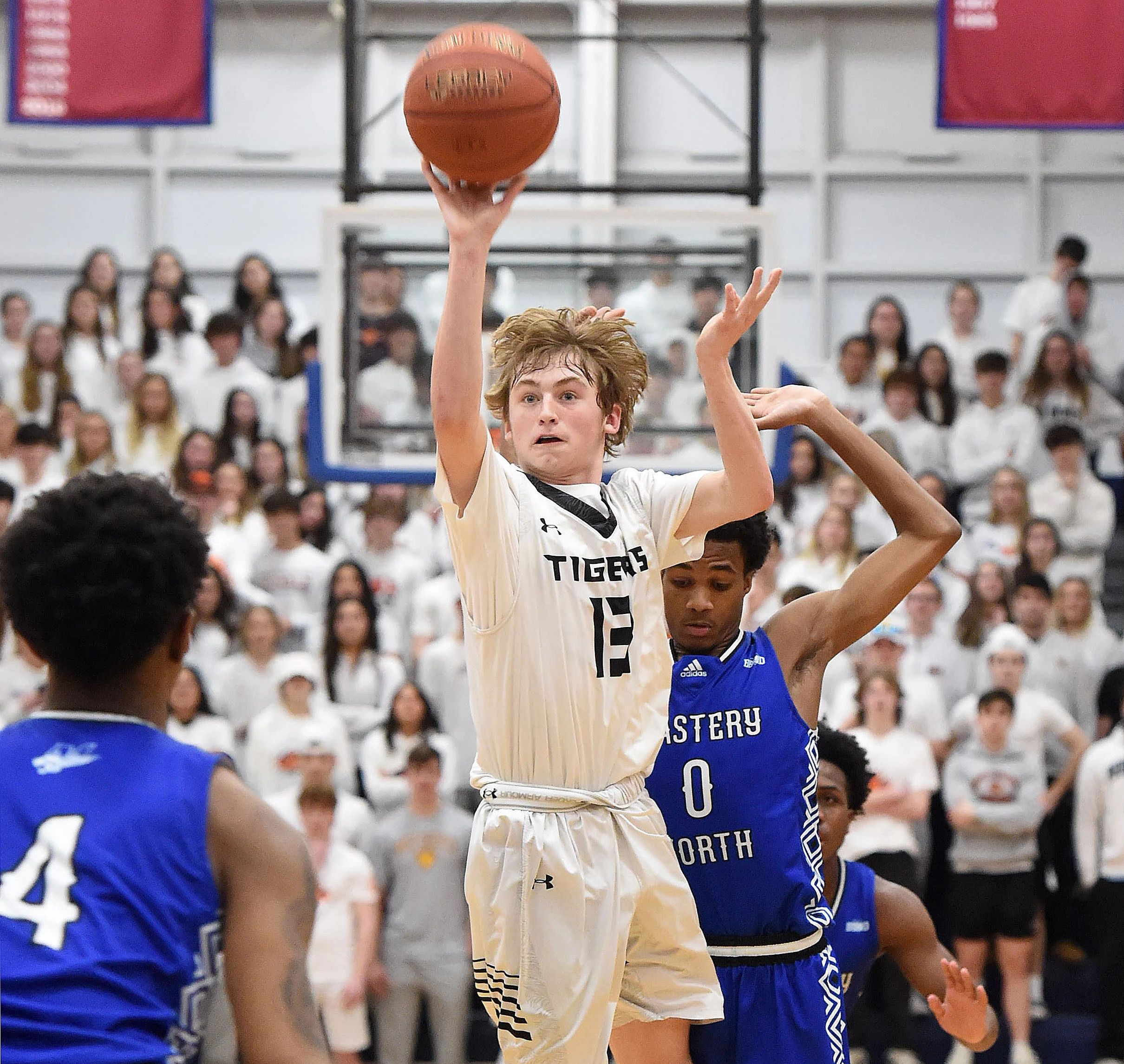 BENSALEM — The word “compete” is most emblematic of the 2021-22 Marple Newtown basketball team.

No matter the strength of their opponent, even if it’s nationally ranked Imhotep Charter, the Tigers always brought their competitive streak to the game.

“That’s the top word on our board every day,” head coach Sean Spratt said. “That’s what we say, if we’re playing a game, just compete and see what happens. That’s who they are.”

Many fans believed that District 1’s fifth-place team had no shot to compete with the District 12 champion Panthers in Tuesday’s PIAA Class 5A quarterfinal at Bensalem High. But Marple proved it belonged playing against one of the top remaining teams in the state.

Imhotep needed a late rally to overcome the Tigers and bolt for home with a 44-39 victory. The Panthers take on District 1 champion Chester in the semifinal round Friday.

Senior guard Justin DiBona had four of his five points in the fourth quarter. He made a finger roll layup to put the Tigers (18-11) ahead 37-36 moments after Ahmad Newell swished a turnaround jumper to give Imhotep its first lead since early in the second quarter. DiBona then hit a runner to tie the game at 39-39, but the Panthers closed the fourth period on a 5-0 run. Newell and Rahmir Barno combined for three foul shots down the stretch to give Imhotep a 42-39 lead. Marple had an opportunity to tie the game, but none of its shots fell.

“We know that no matter who we’re facing, we’re really good basketball players and we know that we’re an even better team,” said DiBona, who added team highs in assists (five) and steals (four). “The seeding doesn’t even matter to us, we’re out here to play a game against five other guys. That’s how I have always looked at it, it doesn’t matter who they are.

“We’ve had that chemistry since our freshman year.”

“Nine seniors who leave behind an unbelievable legacy,” Spratt said.

It wasn’t pretty, but for three-plus quarters the Tigers were the better team. The Panthers, with their awesome Division I- level talent, were caught in a battle and couldn’t solve what the Tigers were throwing at them. Turnovers plagued both teams, but the Panthers heated up in the fourth quarter and finally converted their free-throw attempts. While Imhotep went 7 for 17 from the line, Marple had only three attempts the entire night, mostly because of its offensive strategy.

It was Marple’s ability to find open shots around the perimeter and pump-fake the Panthers out of their shoes that enabled them to grab a 33-26 late in the third quarter. The Tigers also excelled at beating Imhotep’s full-court press on multiple occasions.

“They didn’t panic when the pressure was there,” Spratt said, “and I think that helped us out and gave us some chances to score.”

McKee drilled his third 3-pointer of the night from downtown near midcourt to give the Tigers their largest lead at 33-26. Imhotep had led 12-4 in the first quarter.

Justin Edwards netted five straight points to end the third period and pull Imhotep within three. The Panthers went on to outscore Marple, 14-6, in the final eight minutes.

“They got really aggressive in the fourth quarter as they should,” DiBona said. “They’re really long and really tall and it was tough to get the ball over them, but our guys came out and fought and did a great job.”

Freshman sniper Matt Gardler hopped off the bench to score a team-high 11 points for the Tigers. McKee, who fouled out in the fourth quarter, ended with nine points and four rebounds. Small added six points and power forward Cantwell contributed four.