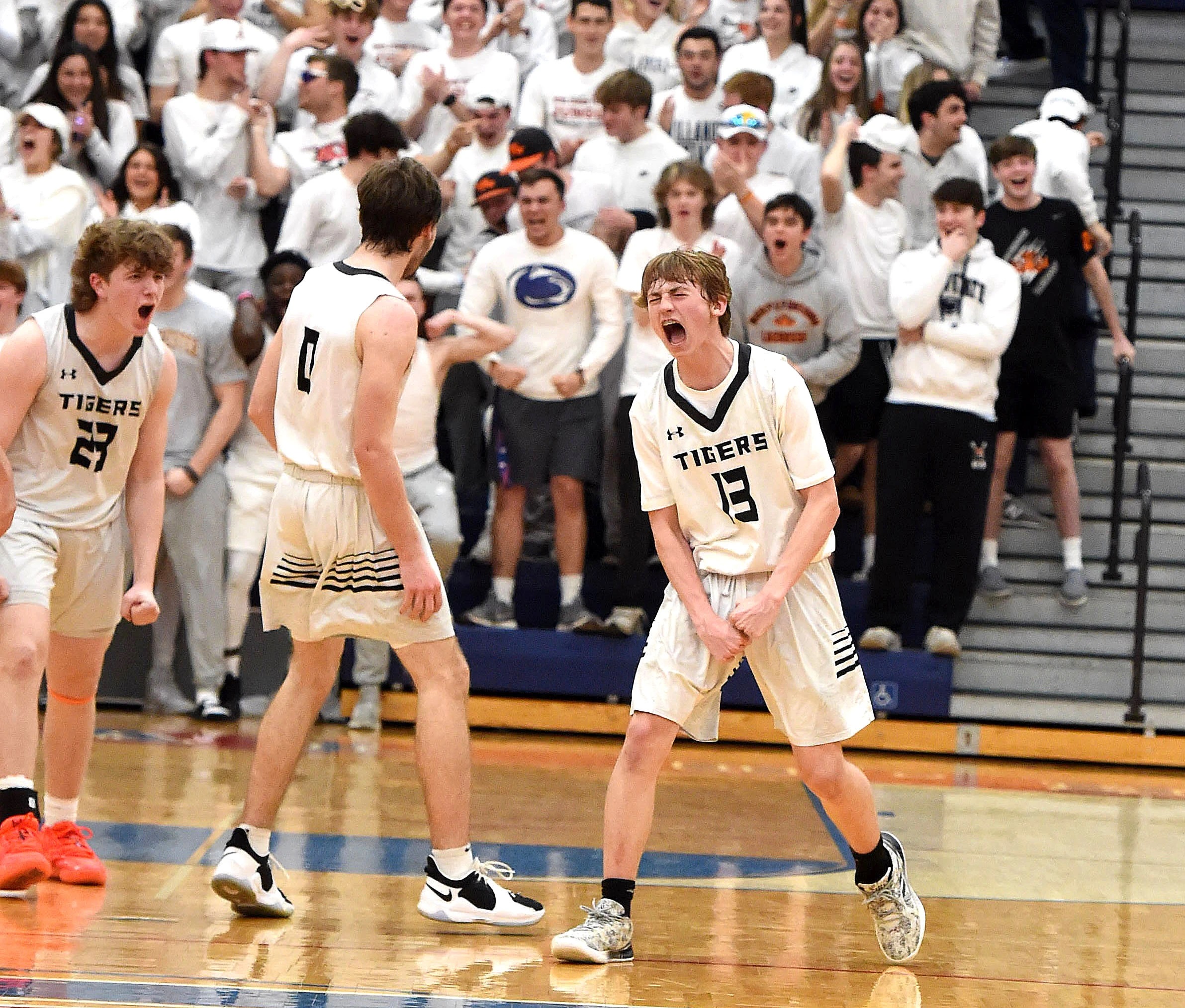 Marple Newtown's Matt Gardler, right, seems a little excited after hitting a three-point shot in the second half against Mastery Charter North Friday night, amid a 56-48 Tigers' victory in a PIAA Class 5A second-round game. (Pete Bannan - MediaNews Group)

MARPLE — Marple Newtown can tell the tale of the third states win in program history in three 3s.

There was the triple from PJ Esposito, the sophomore wing, in the second quarter to get Marple’s offense untracked against a stingy Mastery Charter North Friday night. There was the one that Justin DiBona nailed late in the third quarter to give the Tigers their first lead since the first quarter, a four-point play falling into the Marple bench.

And then there was Matt Gardler, whose first high school game at the familiar family haunt of Cardinal O’Hara was one to remember.

Gardler beat the third-quarter buzzer with a desperation 32-footer, one of four 3-pointers he canned in the second half as Marple’s run in the PIAA Class 5A tournament soldiers on, with a 56-48 win over Mastery Charter North.

The Tigers (18-10) will take on Imhotep Charter, which defeated Radnor in a late game Friday, in a PIAA quarterfinal match Tuesday.

Start from the beginning, where the District 12 third-seeded Pumas (14-6) threatened to open the game up early, leading 15-9 on the back of a 9-0 run. But the answer was provided by Esposito, who hit consecutive 3-pointers to get the Tigers offense in gear, just as he did in the first-round win at Pottsville.

“It seemed like the lid falling off,” DiBona said. “We knew they were going to play inside the 3-point line. We knew once we got in the lane, we could kick it back out. Once he started doing that, we knew that was wide open and we decided to keep doing it.”

The senior guard would have his turn, the teams going back and forth in a third quarter that featured more shot-making than either of the first two. Marple Newtown’s plan was to force the Pumas to shoot 3s. Having them go 8-for-15 from beyond the arc wasn’t on script.

When Thomas Brown took a skip pass from Sincere Robinson, landed and went back up all in one motion to can a 3-pointer to put Mastery up 29-23 with 3 minutes left in the third, it might’ve been time to rethink that. But the Tigers held firm and hit back.

DiBona’s turn was next, getting run into by Cole Beasley as he landed on a corner 3-pointer in front of the Marple bench.

With the free throw, Marple went ahead for the first time since 9-6.

“I wasn’t going to shoot it, but I realized (Beasley) was on the block,” DiBona said. “He’s long and I knew I had to get it up quick, but I didn’t think he was going to close out that quick. I shot it, landed on the baseline and fell down.”

That set up Gardler’s chance to make a mark. The ensuing possession broke down as the clock ticked under 10 seconds, but Gardler grabbed the ball near midcourt, took two dribbles and tossed up a prayer that was answered.

Marple Newtown’s Matt Gardler hits a 3-pointer at the buzzer to end the third quarter against Mastery North in PIAA state playoffs at Cardinal O’Hara Friday evening. The Tigers came back to win 56-48 to advance. (Pete Bannan/MediaNews Group)

Mastery wouldn’t go away, in a game that started late due to the team bus being stuck in traffic. Two free throws from Robinson made it 40-39 with six minutes to play. But Gardler were there again, the freshman playing so far beyond his years.

First came an ill-advised and off-balance 3-pointer that he bricked, a quick heat check. But following the mantra of his upperclassmen, he kept shooting.

Sure enough, he stepped over a screen to bury one with four minutes left, then hit another in rhythm off an Eric McKee feed to make it 45-40, a lead that would hold and would send the Marple fans into a tizzy.

Gardler and Esposito led the way with 12 points each, Esposito going 6-for-6 at the line in the fourth. McKee had eight points to go with three assists, including a feed to Owen Mathes in the fourth followed by a blowby lay-in to keep Mastery at bay.

Kharif Oliver and Tracey Knight scored 13 points each, Knight hitting a pair of 3s in the fourth to keep Mastery in touch. Cole Beasley had seven of his 10 points in the first.

That wasn’t enough to stop Marple, which had only made states once prior to this, from rolling along to the quarterfinal.