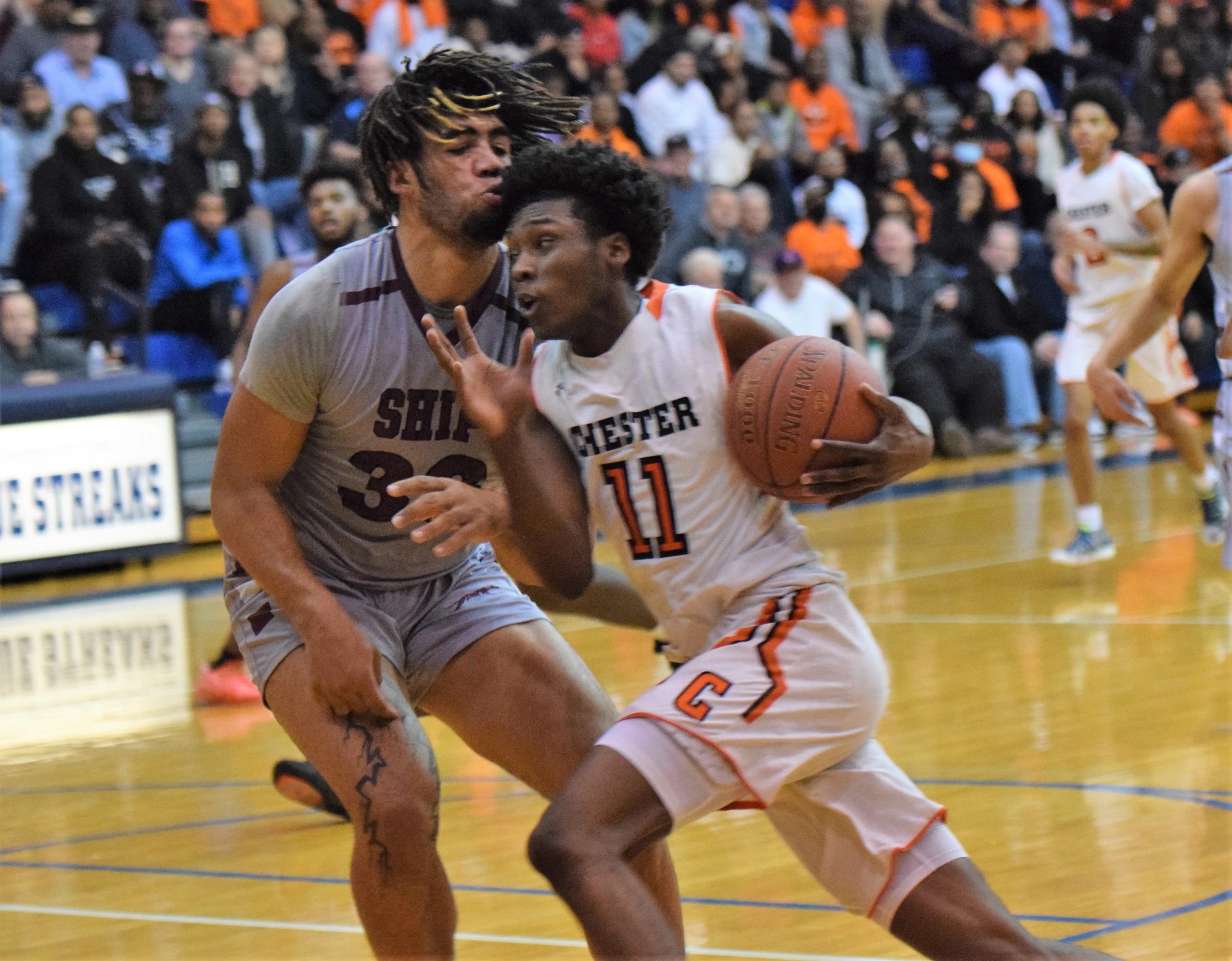 MANHEIM TOWNSHIP — On the road to a state basketball championship, which is the only route ever considered at Chester High, there will come at least one turning-point moment.

For the Clippers, that came early Tuesday night in what would be a 65-59 victory over Shippensburg in the quarterfinals of the PIAA Class 5A tournament.

The arena – that’s what it is called at neutral-site Manheim Township High – was packed, and it was loud, and warm, and it was a challenge.

Chester’s Kevin Rucker goes in for a shot against Shippensburg during a PIAA 5A quarterfinal Tuesday. (Austin Hertzog – MediaNews Group)

The Clippers would fall behind, 12-3, and finish the first quarter down by 10. Anthony Smith, a 6-8 force bound for the football program at Minnesota, was scoring 19 of his 26 points in the first half, the Greyhounds taking a 31-27 lead into the locker room.

“The first quarter, we were slacking on defense,” Clippers’ sophomore Kevin Rucker said. “The second quarter, we turned it up.”

And the third quarter?

Unloading the very swarming, pressing defense that had carried them four branches deep on the bracket, the Clippers proved why they deserved a Friday night opportunity against Imhotep in the state Final Four.

It was how they would take their first lead, 34-33, with 5:42 left in the third on a steal and layup from Qadir Lowrie.

It was how they would wear down the Greyhounds enough free Rucker to score 12 of his 26 points in the third quarter.

It is why Chester will be in a state semifinal for the 30th time in its history.

In a game that did turn tight at the end, the Chester fans did their part to make a difference. Despite reports that Shippensburg was expecting several thousand fans at the game, there were almost as many Chester supporters in the building, enjoying what is developing as another memorable season.

“You’ve just got to give it to our fans,” Taylor said. “They bring us energy. That pumps our guys up.”

That was evident after the slow Clippers start, which required Taylor to call an early, restore-calm timeout.

Sufficiently settled, Chester drew within 28-25 on a couple of Rucker free throws with 1:29 left in the first half. When Larenzo Jerkins stole the ensuing inbound pass and scored two of his 10 points, the momentum officially had turned.

“Coach told us to just keep playing,” Rucker said. “It’s a game of runs. He told us not to ever lose our composure and stick with each other.”

Among the more immediate challenges was for the Clippers to respond to Smith in the second half. They did that with the lengthy Jerkins keying a strong, double-teaming defense. In an all-hands-on-deck kind of night, Taylor also received strong bench minutes from backup big men Jerry Young and Vince Coleman challenging Smith with their bulk.

“That’s what you have to do,” Taylor said. “It’s team basketball. Everybody has to help.”

Shippensburg, which finished its season at 22-5, had one last surge, drawing within 60-57 on a bucket from gifted guard Jayden Statum, who scored 10 points. When Jeremy Thomas completed his 11-point night with a steal and a layup, the Greyhounds were within a point with a minute to play.

But Jerkins scored on a feed from Womack and Isaiah Freeman made a steal and fed Lowrie for a score. Rucker’s free throw with 5.9 seconds left provided the final score … and more Clippers history.

“We were down early but I never lost hope,” Rucker said. “We have gotten to this point, and it is a blessing.”