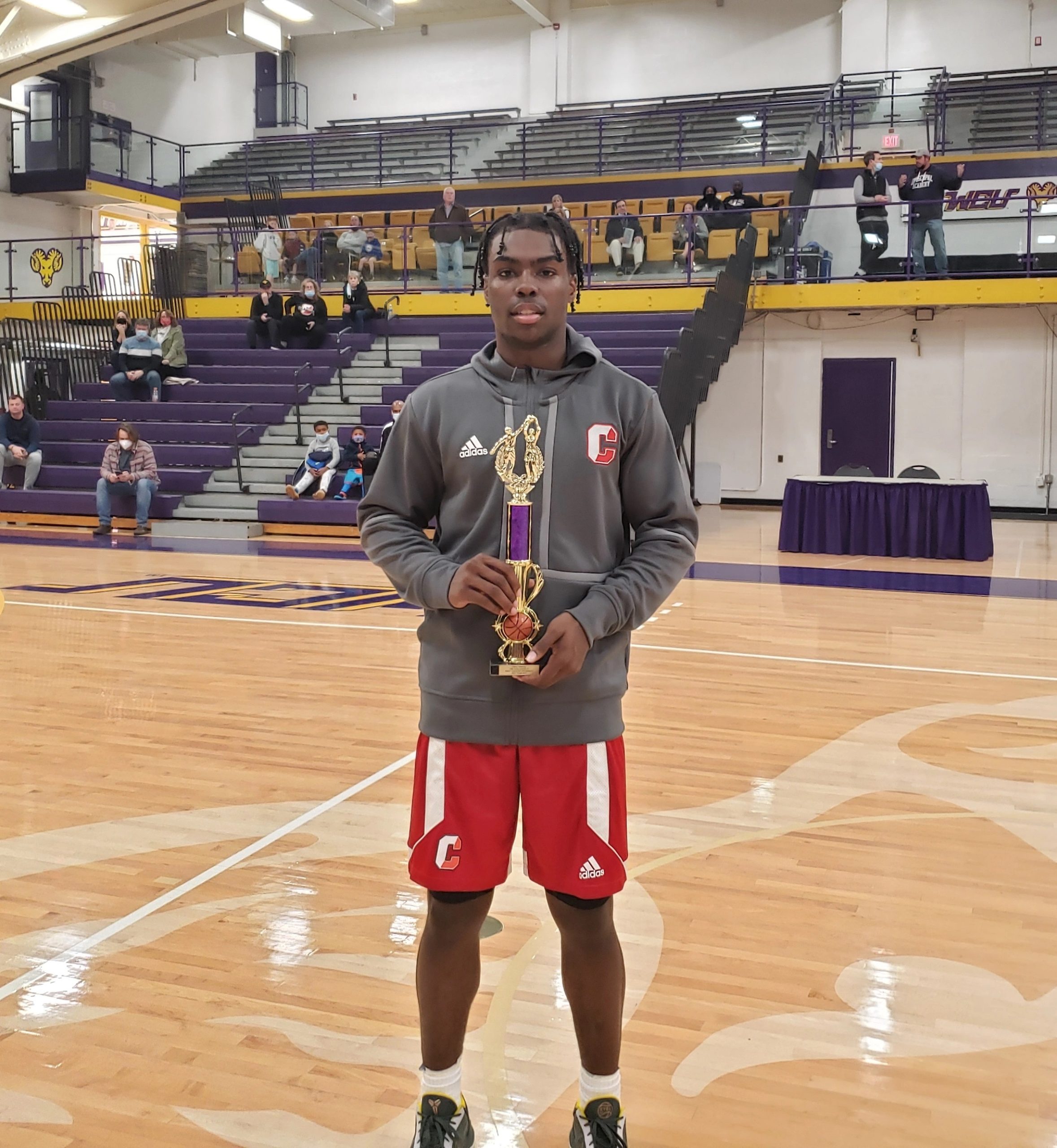 PENN TWP. — There wasn’t much to savor from the last two minutes of Tuesday night’s PIAA Class 4A boys basketball quarterfinal game.

Not the missed free throws. Not the five-footers clanked off iron, the traded turnovers, the Archbishop Carroll players – yes, plural – dashing off the court to quickly change blood-stained jerseys.

But with a dozen seconds remaining and Montour forward Isayh Mosley flying in from the weakside on what appeared to be an unabated path to a game-tying basket, Blake Deegan supplied a moment well worth treasuring.

“The whole game, we kind of got beat back door, and no one was really helping,” Deegan said. “We emphasized that at the end, that no matter what, everyone’s got to step up and help and forget about your man.”

Carroll (17-10), the fifth seed out of District 12, will take on Quaker Valley in the 4A final four Friday night. The District 7 champion beat Fairview, 54-48, Tuesday night.

Between them, Deegan and Harold Ivery blocked nine shots, repelling Montour’s aggressive post offense. Despite not owning a height advantage, the District 7 runner-up pounded the ball into the paint every chance it got, back-cutting into the game after trailing by 12 at the half.

It happened again after Moses Hipps missed two free throws that would’ve made it a five-point game with 20 seconds left. Vason Stevenson drove, met resistance and threaded a pass to Mosley crashing from the opposite wing.

But Deegan swatted it away, and Carroll had only to repel two more missed free throws, an ensuring scramble and a hoisted half-courter.

“That was huge,” Carroll point guard Dean Coleman-Newsome said. “Huge contributions from those two. Those guys practice that. Every practice, they’re blocking shots. They’re athletic, that’s their main thing. They’re not the biggest guys, but they can always be athletic and be ready on the help-side.”

The last two minutes were not a portrait of beauty, kicking off with 70 seconds of Carroll playing a tenuous game of keepaway. Jake West hit two free throws, the injury replacement when Seamus Rogers had to exit to have a cut bandaged, to make it 54-51.

It was an unceremonious end for an otherwise solid game. Carroll got going behind Coleman-Newsome, who was able to take whatever he wanted off the bounce. He scored 18 points, to go with eight rebounds and seven assists, after he posted a triple-double in a Round of 32 shellacking of Athens High.

“It’s absolutely my responsibility,” Coleman-Newsome said. “My primary goal is to set the tone for the guys. Whatever I can do to contribute to the team, is what I plan to do. If Moses has got an open shot, get him an open shot, get him going. And if it’s there, I knew they really couldn’t guard me and they weren’t helping off, so I just got to the basket and did what I knew how to do.”

The junior guard was particularly big early with Hipps missing his first eight shots. He would finish with 12 points, but on just 3-for-14 shooting.

Deegan picked up the slack with eight first-quarter points, including a pair of catch-and-shoot 3-pointers.

“He’s been carrying us the last couple of games, so we told him we have his back,” Deegan said of Hipps, who scored 31 points in the last round. “Everyone’s there to step up. Everyone has just got to know their role and get ready.”

Carroll also missed sure-handed senior guard Shawnn Smith, out with an ankle injury, a big reason for their 18 turnovers.

Carroll led 31-19 at half, but Pinkett scored 11 of his team-high 18 points in the third to get within four. Pinkett had four of his five steals in that frame to jump-start the Spartans (22-6).

“Coach said, stay with it and we’ll get it,” Pinkett said of pounding the post. “We stayed with it, and we started to get it moving.”

Stevenson made his first three attempts of the fourth quarter on the way to 13 points. Eleam posted 12 points and 10 rebounds, though he endured a 3-for-11 shooting day, most of them putback attempts.

Carroll managed to withstand just enough of those gritty possessions in the lane, extending the run of the Catholic League’s 10th-place team.

“I just kept having faith,” Coleman-Newsome said. “I love my team, I love my guys, I’m going to battle with them every night. So every time we go out on that floor, I have faith we can win.”