Norristown falls to North Hills in PIAA-6A second round 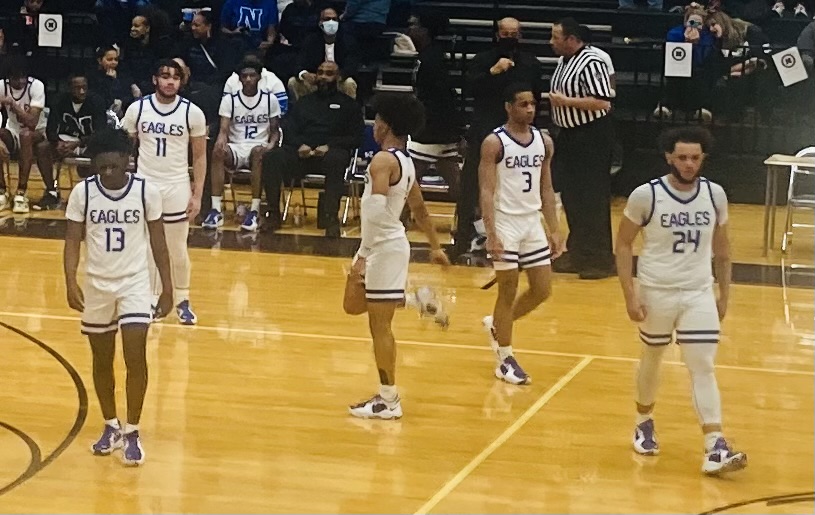 Norristown takes the court for the second half of their state playoff game with North Hills on Sunday, March 13, 2022. (Kev Hunter/MediaNews Group)

“I grew up with half these guys. They’re like my brothers,” Zaki Gomez said after the Eagles’ state playoff game with North Hills. “Playing with them is like a dream come true for me. It’s something we talked about since we were younger, making it to states, going far, and doing it all together.”

A tight-knit, senior-heavy group for the Eagles saw a fine season come to a close against North Hills, 77-57 out at Mifflin County High School, capping a tremendous run this winter by Norristown.

“It was special, a special group,” said Gomez, who nailed a game-high five 3-pointers for his 15 points. “We just had to come out this year and prove we could do something special.”

D.J. Johnson, one of five senior starters along with Gomez, added 10 points for Norristown. Fellow seniors Nasir Williams had eight and John Dinolfi chipped in with seven.

Gomez opened the scoring with a three to quickly put the Eagles out in front.

“We just had to play our brand of basketball,” the senior said. “We know what we can do.”

Norristown battled until the end, but North Hills countered with a tremendous effort of its own, led by Alexander Smith (27 points) and Royce Parham (20 points).

The Indians, dominant inside and scoring more and more in transition as the game wore on, advanced to Wednesday’s District 1-6A Quarterfinal against Archbishop Wood.

North Hills took the lead in the first quarter and never relinquished it. The Indians were ahead 36-21 at the break and stretched the gap to 20 in the third quarter.

A breakaway dunk by Matthew Seidl (13 points) was part of an early burst that provided a 6-3 edge.

The Indians led for the remainder of the quarter, one of several dunks by Parham and a three by Devin Burgess (13 points) that bounced high off the rim and in widening the margin to 20-13 after one.

Gomez continued to hit from the outside for Norristown, but North Hills’ inside attack maintained its pace.

Another dunk by Parham and a drive by Burgess increased the Indian advantage to 36-21 at the half.

Alexander Smith had 15 points for North Hills in the first half, with Parham adding eight.

Gomez led Norristown at the half with nine points.

Gomez and Nasir Williams each hit threes for the Eagles in the third, but North Hills began to pull away.

Seidl scored in transition and had a breakaway layup, and an alley-oop from William Blass to Parham made it 47-27. The Indians led by 22 after three and stayed in control in the fourth.